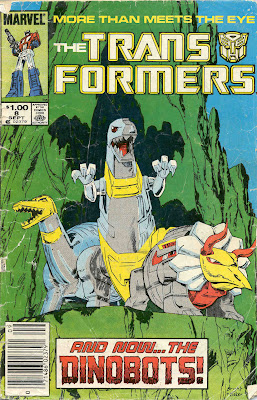 Repeat Performance! is the eighth issue of the US Marvel Transformers comic series. Bob Budianski wrote the script, with pencils by William Johnson, inks by Kyle Baker, colors by Nel Yomtov and letters by Rick Parker. The cover is by Mike Collins.

Mike Collins didn't do much Marvel comic work, but he actually did draw quite a lot of Transformers artwork including Ladybird books and UK comics. He also wrote 2/3rds of the UK comic story Crisis of Command!, which Bish will be reviewing before too long. It was the last major UK comics story not written by Simon Furman and is actually quite decent. Collins' cover here is quite nice. Grimlock, Slag and Sludge stand menacingly on a ledge in their dinosaur modes. They cast long shadows behind them, heightening their menace. They stand apart rather well from the rocky green background they stand on. "And now . . . the Dinobots!" we're promised. It's a terrific cover, and I certainly want to learn more about the Dinobots after seeing it. One tiny bit of serendipity is the three Dinobots chosen for this cover - these are the same three Dinobots who would be introduced first in the Sunbow cartoon, in S.O.S. Dinobots. As an unintended consequence, this image could work very well as a sort of poster for that episode. (Swoop and Snarl would be introduced in War of the Dinobots a few episodes later.)

The issue itself is also quite strong, suffering from none of the pacing problems that afflicted the previous issue. We open on a nice splash of Ratchet riding his Mobile Autobot Repair Bay (which doesn't seem to have anything to do with the little platform that comes with the toy, unfortunately) through The Savage Land. As he rides, he gets attacked by an ENORMOUS snake that is nevertheless no real threat to him. Ratchet is more curious about it than threatened by it, but can't spare the time to learn more. He reminisces about the events of the last few issues, which include some artwork of him arriving at The Savage Land. It's well done mandatory exposition that actually gives us something new even as it catches us up on the old happenings.

(The Savage Land is a longstanding part of the Marvel Universe, a tropical paradise hidden in Antarctica. Interestingly, there is a deeper tie to mainstream Marvel continuity than just the setting in the form of a note placing this story before Avengers #257, wherin the Avengers fight Terminus in . . . The Savage Land.)

A brief interlude - back at the Ark, Megatron has prepared Prime for transport. Shockwave notes that Megatron has adjusted well to taking orders stating that he had calculated only a 27.6% chance that he wouldn't have needed to destroy Megatron for insubordination. Megatron silently chafes, which is conveyed very well both through Johnson's pencils and Budiansky's words. 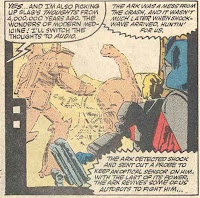 Back in the swamp, Ratchet uses his medbay to blast tar away, having detected a Cybertronian life form underneath the sticky viscous fluid. He uncovers Slag, then patches into his brain and watches Slag's memories. It's slightly surreal, watching ratchet watch Slag's thoughts, especially when we're watching Ratchet watch Slag watching his companions watch Shockwave on a viewscreen. Still, it's a cool origin for the Dinobots, and their three-page fight with Shockwave is both well rendered and well written. In a clever bit of writing, just as Ratchet figures out that Shockwave went into emergency system shutdown to conserve energy, Slag revives from the same. He's ornery with Ratchet, but quickly comes to accept Ratchet as an ally.

Meanwhile, the human plot advances. G.B. Blackrock and the U.S. Army are camped out outside of the conquered Aerospace plant, Blackrock giving an interview. Oddly, he's lost his mustache.

Maybe he wanted to be clean shaven for his interview. When Shockwave approaches the plant, the Army opens fire on him. Shockwave's dialogue is particular inspired as he observes that human armament could never pierce his plating. Once inside, Shockwave reveals to Soundwave that he's already used the creation matrix to give life to six new Decepticons, and that the plant would provide the bodies for the new brains. Josie Beller watches all this from her hospital bed, crying with rage and frustration. Bob's been building on her for a while, and now we see that the micro-circuitry can make an exo-skeleton allowing her to move her paralyzed limbs. But it's not just overcoming her handicap that fills her thoughts, no. Revenge is also present in her mind.

Cut to the endgame. Megatron sits, bored and pensive. He has come to believe that Ratchet was a coward who would say anything to save his own life, and that letting the medic go was a mistake. However, his thoughts are interrupted when Ratchet calls him, having apparently fulfilled his part of their pact. Images of a defeated Shockwave are sent to Megatron, filling him with glee. Again, Johnson does a great job with expressions.

Ratchet drives to the mountaintop where he and Megatron agreed to meet. Megatron appears, but refuses to honor the pact. He chastises Ratchet for being too trusting, but is ironically ambushed by the waiting Dinobots. See, Ratchet figured that Megatron would brake the sacred Rite of Oneness, and so sent him images of a defeated Shockwave . . . from four million years in the past! (A repeat performance, if you will) However, even with the element of surprise, Megatron is a titanic foe. He manages to best the Dinobots in two excellent pages. Ratchet refuses to just stand there, and attempts a suicidal charge to push his adversary and himself off the mountain. Megatron doesn't budge a micron, though, and laughs at Ratchet's valor. He seems genuinely impressed, and states that it will be an honor to destroy a warrior as brave as Ratchet . . . BUT WAIT! Though Megatron absorbed the blow, the force was transmitted into the 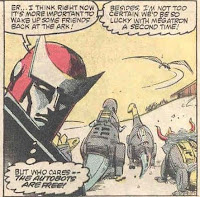 ledge he stood on, which cracks and falls. Megatron shifts to his gun mode to attempt to lessen the impact and vanishes into the snow below. The reviving Dinobots are eager to finish the job, but Ratchet cautions that repairing the other Autobots takes priority. Privately, he wonders if another encounter with Megatron would end as well for them, though he wisely doesn't vocalize those concerns. These Dinobots don't look like they'd shy away from a fight. The title is doubly appropriate, because the Dinobot/Megatron fight seems to echo the Dinobot/Shockwave fight, only this time with the addition of Ratchet turning the tide.

Finally, a four panel epilogue. Josie Beller, in her hospital bed, is enjoying her regained mobility. But that's not all she's enjoying - she also blasts some medical equipment with a ray from her hands. She's ready to check out, and the text for next issue promises us that no machine is safe from: Circuit Breaker!

The artwork is really working well, now. It's a good creative team, with Johnson's pencils conveying both strong emotions and dynamic fights. Baker's inks are spot on. In particular, I thought they really helped sell the concept of the tar.

Overall it's a great issue. Ratchet's evolution, from medic to warrior, is complete, and he is no longer alone in his quest. We get some intriguing new developments, such as a newly mobile (and blasting) Josie Beller and the promise of six new Decepticons. Johnson's art really shines in this one. My lack of appreciation for his work in the prior issue probably stemmed more from a script that didn't really let him do either strong emotions or sweeping battles. Everything comes together to make a great read and a satisfying conclusion to the second story arc of The Transformers.

I love these reviews, they bring back a lot of memories! Keep it up, please!

Do you happen to know where the $1.00 cover came from? This issue was only 75 cents when it first came out (here's proof. That's my own copy pictured there, for what it's worth. Incidentally, the first US issue to cost $1.00 was #28.).

As I indicated earlier, this issue is particularly special to me, being the first I ever purchased. Indeed, one can argue that much of my current love for Transformers stems from this issue. I very much enjoyed revisiting it.

Topic of discussion: Could it be argued that, Ratchet's claim to the contrary, he did in fact break the bond of the "Rite of Oneness" by deceiving Megatron into believing that Shockwave was destroyed in the present day?

As far as the Rite of Oneness is concerned, I think Ratchet would have had quite the moral conundrum if Megatron had said, 'well, good show! I'm abandoning the Ark now, but I'll be back in force in a few days. When next we meet, it will be as enemies.'

While you could argue that deceiving Megatron was a violation, I'm sure Ratchet never intended to take advantage of Megatron, should the Decepticon have honored his part of the bargain. I think he's ok.

Perhaps that's a Canadian copy displaying the $1.00? Don't know if they did that back then, though...

It's patently obvious that Megatron being Megatron would never allow Ratchet to win at any costs- that being the case it would have been suicide to face him under strictly honorable conditions- he was just being prudent really. It wasn't just Ratchet's honor at stake either, he had to consider the survival of the Autobots & of course Earth.

When you think of it that way, it's almost a cheat by Budianski to advertise the moral conundrum at the end of number seven. It really is too bad Ratchet couldn't have beaten him on his own terms (although I suppose he did), but Megatron is just- well he's kind of a force of nature. Take what you can get when you can get it I guess.

Good review, although I'm not sure where you got the idea that Mike Collins is the cover artist... he was an artist for Marvel UK at the time. In the bottom right corner you can see the autographs of Mark Bright and Kyle Baker... :)

Ah, so it does, Hans. I got my information from the wiki. I should probably update it.

Anyway, the thing i didn't like about this issue was how easily Megatron defeated the Dinobots. Grimlock alone is almost as strong as Optimus Prime, and i always thought the other 4 Dinobots (with the possible exception of Swoop) were at least as strong as Brawn. I know the writer wanted to show Ratchet defeating Megatron, but i still think this wasn't the way to go about it. But then again, i think that if back in Savage land, the Dinobots attacked Shockwave, they could beat him too-i think Grimlock alone could.