I was actually quite surprised to learn that the original Classics Starscream was going to be included in the new Transformers Universe series. I know he's a popular character, of course, but it seemed like a strange decision to include a repack of a two-year-old toy in the current assortment. Once I realized it wasn't a repack at all but a completely new redeco, it made perfect sense. I eagerly gobbled the new Starscream up as soon as I spotted it in the store.

Ever since the Beast Wars toys came out, with their amazing robot-mode articulation and liberal use of ball-and-socket joints, I had clamored for a new Starscream toy that used the same technology. I'm not sure exactly what it was about Starscream that I felt made him a good candidate to get an updated toy; maybe it was because he, himself, appeared on the Beast Wars show through the course of several episodes, or maybe it was just because he's always been a favorite character of mine and I felt he really deserved a decent toy in his likeness. In any event, when Hasbro finally released the Classics version of Starscream, it was a mixed blessing. I loved that Hasbro finally came up with a fully-articulated version of Starscream that turned into an F-15 jet, but while his colors were evocative of his original look to some degree, they just weren't what I had been hoping for. I understand that Hasbro has stated that they're going for realistic vehicle color schemes whenever possible (which serves to explain the disaster they call Transformers: Universe Powerglide), but a silver jet with red splashed on the wings and stabilizers with a blue stripe down the center doesn't look like Starscream to me. (If anything, it looks like G2 Windrazor.) Still, I appreciated the effort that went into the toy, and I was content to enjoy it while quietly suppressing my dislike of the color scheme. 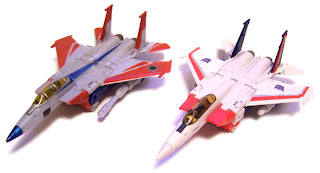 Flash forward to two years later, and witness the culmination of a dream. The new Starscream is exactly the same toy, of course, but its color scheme is so vastly improved that it makes me wonder how anybody gave the first toy final approval to begin with. The original metallic silvery-grey color got swapped out for a lighter, vibrant shade of off-white. The muted crimson paint applications were replaced with a much more brilliant red color. The blue plastic used is approximately the same, perhaps a shade darker. While a lighter sky blue would have been more appropriate if the goal was to make a toy that represented Starscream as he appeared in the G1 cartoon, the color scheme does look good, and the dark blue creates a nice contrast. (Note: I've modified the weapons on my toy, pictured; the retail version has missiles the same length as the original toy.) 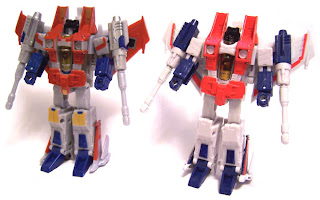 Even more than the choice of plastic colors, though, it's the paint applications on the new Starscream that really sets him apart from the old one. A much more faithful approach to his original look was taken this time, and he boasts the proper blue stabilizer fins and red air intakes in jet mode, as well as his distinctive red and silver wing deco. He's even got the upside-down Decepticon insignias on his wings this time, which the first toy was missing completely. Even his canopy glass was changed from yellow to orange in an attempt to make him look more like his G1 self. One flaw present on the original toy that was fixed with the new one was how the black color of his helmet, which makes up a chunk of the nosecone, was still visible even when he was in jet mode. On the new version, the sides of his helmet remain unpainted, so that the color contrast no longer spoils the illusion of his vehicle form. The only change I don't really care for is his weapons, which are now predominantly blue. They're pressed from the same molds as his fists and feet, so this is perhaps unavoidable; the first version avoided this look because nearly the entire upper half of each launcher was painted silver; the new toy could probably have benefited from a similar approach, but it's not a dealbreaker.

Considering this toy originally made its debut in 2006, the mold has already seen a lot of wear and tear. Aside from the original Starscream release, this mold has also been used for Ramjet, the Target exclusive Skywarp, the BotCon versions of Thundercracker and Thrust and Dirge, and more recently, Acid Storm; there's also the Henkei version of Starscream available in Japan. The point is that this mold is already starting to wear out, and there's evidence that the production mold has already been retooled in places to compensate for mold degradation. The mounts for the peg holes underneath his wings have been rounded off, and Starscream's feet no longer ratchet as you unfold them, and his arms no longer lock in place during transformation. Ridges have been added to the inside of the peg holes on his arms so that his weapons will fit more securely. The pegs connecting his legs together have been retooled as well, and his tail rudders have been modified so that they ratchet when you fold them. The copyright stamp on the inside of his leg has been updated to 2008. (Except for the ratcheting tail rudders, none of these changes are present on Acid Storm, the second-most recent iteration of this mold.)

This toy also seems to suffer from some quality control problems. The first Starscream I bought had a chunk of its stabilizer wing missing, straight out of the package. I got a second one with the intent of taking the first one back to the store, only to discover that the new one was missing the painted stripes on one of its wings. I had to open both toys and disassemble them just to put together one complete, unbroken unit. (Sometimes I think that I'm statistically destined to end up with more factory defects than most people, simply by merit of the fact that I buy so many toys. Twice in a row with the same exact figure is really pushing it, though.)

I remain hopeful that Hasbro will continue to produce this toy in different colors, representing additional characters. They haven't done a version of Sunstorm yet, for example, a fairly obscure character who seems to remain popular with fans. Hasbro has also said they haven't completely ruled out eventually doing retail versions of Thundercracker, Thrust, and Dirge if they are sufficiently different from the BotCon toys to help preserve their exclusivity. (TakaraTomy is also doing Henkei versions of Dirge and Thrust with completely new wing sculpts and slightly different color schemes.) I'd love to see Hasbro expand the line with additional unnamed background characters, like the Decepticon jet from "Five Faces of Darkness" part 4 who was given Onslaught's color scheme (I've named him Slaughterhouse; I would have no problem whatsoever with Hasbro using that name and making it official) or the rather feminine Decepticon jet who appears near the end of "More Than Meets the Eye" part 3 (Raksha gets credit for coining the name Twilight). I will continue to buy this toy every time a new version of it comes out, and I know I'm not the only one.

Starscream appeared in only one Beast Wars episode: Possession.

(Unless you're counting deactivated bodies in "The Agenda", which I won't swear too, but don't even recall Starscream there)

That's not entirely true, sir. He also popped up, very briefly, during Cheetor's dream sequence from the episode "The Web." (You can see the Decepticon symbol on his wing rather prominently before he rockets off into the distance.)

You can also see his disembodied head in at least one episode, usually as an easter egg and usually buried in a pile of junk along with other stuff like Megatron's rubber ducky. Don't recall which episode that was off the top of my head, though.

I love this mold also, after my brother got me Acid Storm for Christmas. It is interesting to see that while the mold has had significant wear, it does sound like your new SS did not have any bits missing!