Dinobot has always been a fan favorite, easily one of the most complex and fascinating characters in the entire Transformers mythos. It was his character treatment alone that elevated him to this status, giving an otherwise unremarkable first-year Beast Wars toy with a recycled name an entirely new significance. Now, there really wasn't anything seriously wrong with the original Dinobot toy, at least nothing that didn't also plague most of the other toys in the series (inaccurate beast forms with plenty of ventral robot kibble). However, since Mainframe took plenty of liberties with the character's design in CGI animation, fans have wanted a toy for over ten years now that more closely resembled Dinobot's depiction in the show. The new version of Dinobot is an attempt to create a toy that more closely adheres to the computer animation model that people associate with the character.
Beast Wars represented a changing of the guard for the Transformers toy line, reinventing the series from scratch and replacing Autobots and Decepticons who turned into cars and planes with Maximals and Predacons who all turned into lifelike animals. The line was also passed to the design team at Kenner, who at the time had also been awarded the licenses for movie toy likes like Star Wars and Jurassic Park. Their experience in creating toy dinosaurs really isn't apparent with the 1996 version of Dinobot, probably due to their relative inexperience in creating dinosaurs that could also transform into robots. Dinobot's original velociraptor mode was spoiled rather badly by the unavoidably obvious robot legs hanging from his underbelly, and no attempt at all was made to hide the robot feet protruding from the ends of them. His robot mode didn't have any major design flaws, but the halves of the opening helmet that formed his "mutant head" that were attached to his robot head were a bit distracting, and his toy had a featureless mask rather than the sinister, toothy scowl Dinobot wore in the show. 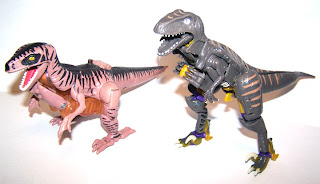 The new Dinobot is a much more well-proportioned raptor. Where the old Dinobot was fairly plump awkward, the new toy looks lean and vicious, with long, powerful legs and a long, sweeping tail. He shares a similar kibble problem with the old Dinobot, though, only this time it's his robot arms that are tucked into his chest, Transmetal Megatron style. It's not as ugly as the legs on the original Dinobot, but the obvious manner in which his robot-mode fingers protrude from his neck is bothersome. Some manner in which his arms could have folded into the cavity inside his chest, or perhaps tucked away between his raptor legs, would have looked a lot better. Sections of his robot legs are also plainly visible on the insides of his raptor legs, as are the robot feet tacked to his dinosaur heels, so it's not a completely convincing disguise. I suppose I should cut the designers some slack, since it's difficult to completely encapsulate one transformation inside another (I don't complain that the vehicle toys have visible robot parts when I turn the car upside-down).
His color scheme is way off, though. The original Dinobot toy had a pink skin tone with brown stripes, which was mercifully toned down to something more realistic for the animated series. The new toy almost goes too far in the opposite direction, cast almost entirely in a muddy greyish-brown color, accented by some lighter tan stripes. It's probably a realistic skin tone for a wide variety of reptillian creatures, but on Dinobot, specifically, it looks wrong. It's almost as if somebody accidentally swapped the color pallette for his skin tone and his stripes, which would look much better if they'd been switched around. In fact, between the muddy brown and the visible yellow robot parts, he reminds me more of Airazor than anything else.
Dinobot's transformation is strange and elaborate, and its ultimate aim seems to be to end up with a robot mode that's as closely styled after Dinobot's CGI model as possible. This time, the raptor's hind legs turn into the robot legs, while the robot arms are (mostly) hidden inside his body. In a clever twist, chunks of the raptor's upper legs actually shift down to his lower legs to give them some bulk, and they also conceal the rib-like designs that fold out to complete the appearance of his legs. The rest is about like the original Dinobot; his raptor head folds into his chest, while his tail pops off and separates into his weaponry. 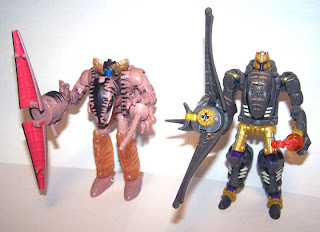 This toy is certainly designed more accurately than, say, the new Cheetor. All told, his robot form has over 13 points of articulation, although the range of motion for his knees is extremely limited. His body proportions are very good, with almost no dinosaur kibble hanging off him (his raptor arms are hanging from the back of his shoulders, but they can be swung down to lay against his body so they don't protrude). His dinosaur head fits securely, lodged halfway within his chest, although due to a spring-loaded panel that's meant to close up for his beast form, it doesn't seem to sit quite as snugly inside his chest as it seems to be designed to. His head sculpt is excellent, and perfectly captures Dinobot's visage as rendered in CGI. A lightpipe design allows his robot eyes to glow when he's held up to a light source (this design element was actually included on the original Dinobot, but his eyes were inexplicably painted). Where the original Dinobot's raptor feet folded up into claws for his robot mode, the new toy has a separate set of claws for his robot mode, complete with show-accurate double thumbs. The toy also has more traditional robot fists that can rotate around from within his forearms, for those who prefer Dinobot to have more normal digital dexterity.
He actually needs at least one of these fists to hold his accessories; like the old Dinobot, his tail unfolds into his primary weapon. Instead of a spinning cyber-slash weapon the old toy was equipped with, the updated version has a translucent orangey-red missile launcher, with the missile bearing a suspicious resemblance to the sword carried by the original Dinobot. It's shorter and stubbier, though, due partly to the necessity of having to hide it in the tail for the beast mode, but also because half its length stows away inside the launcher, so that the guard is mounted about halfway up the sword's total length. Dinobot can carry the missile in his fist like a sword in either his regular robot fist or his clawed hand (in which it hangs rather loosely, but is still adequate for display purposes). The toy also has an interchangeable faction symbol; a panel on the top of his raptor head can rotate around to reveal either a red Maximal symbol or a purple Predacon symbol. This in itself is interesting, since the original Predacon symbol was actually yellow (Hasbro did change its color to purple later on, but they changed the Maximal symbol to green at the same time). It's more likely that somebody just went with these colors because they were the same colors for the Autobot and Decepticon symbols. Dinobot didn't actually have visible insignias in the Beast Wars cartoon, but it's still an interesting feature for the toy to have, and a nice acknowledgement that he did switch factions, and more than once. (According to his packaging, however, he's apparently a Decepticon.)
Interestingly, the new Dinobot has an undocumented feature that mirrors the old toy. Although not mentioned in the instructions, the original Dinobot had a peg hole on his tail weapon that was designed to connect to the peg on his back so that he could (presumably) store his cyber-slash weapon when he wasn't using it. The new Dinobot is also capable of storing his weapon, using the hook-shaped launcher trigger, which is designed to slide into the slot behind his head. It's not a very attractive look, but at least it's a place to put his accessories besides the bottom of a toy box.
The biggest problem by far, though, is his color scheme. Remember that other toy line that was also called Transformers Universe, the one that consisted of weirdly-colored toys like a purple Fuzor Silverbolt and a purple-and-orange Blackarachnia and stuff like that? Well, this Dinobot almost looks like he belongs in that toy line--like this was the crazy redeco that Hasbro came out with to distinguish it from the first version in normal colors. Dinobot's got a mustard yellow helmet, fists, upper legs, and feet, with purple coloring on his knees, ankles, and robot face. The toy's actual sculpt was a bullseye, but the color scheme completely shoots itself in the foot. I guess the yellow is supposed to represent Dinobot's gold coloring in the TV show, but the purple isn't even a vaguely close match for the blue that Dinobot's face should actually be. This is the sort of half-hearted research that really ruins what could have been a truly remarkable toy. The toy also seems to be missing some paint applications that it was clearly meant to have, most notably the shoulder pads for his robot mode (which are almost unnoticeable without paint to call attention to them).
Overall, I like this toy, and it's leaps and bounds better than the original Dinobot, but the poor choice of colors is such a glaring oversight that I can't believe this toy made it to the final approval stages. When a toy like this is specifically meant to represent a character from the past, you'd think it would be somebody's job to make sure it actually looks like that character.
Zob
Posted by Zobovor at 3:10 PM

Up 'til now, I've just got the Universe versions without really caring about Henkei, but with Dinobot, I *really* think I'm going with Takara over Hasbro, as it looks like they've painted him... uh, y'know... *right*.

No, I'm sorry, this is just a half-assed attempt at trying to make a tv show accurate tf and then getting distracted by a moth or something. The colour scheme is completely wrong, his beast mode looks more accurate on the original toy, and his weapons just look like they've just watched a couple of episodes of BW whilst drunk and vaguely remembered the details when they got back to work the next day.