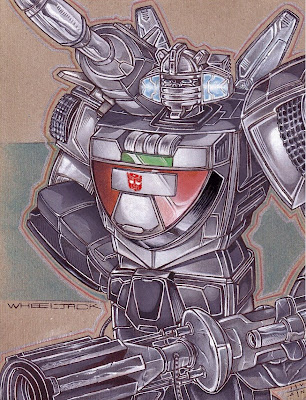 After a brief break, Iván's Gallery is back. This week, Iván brings us Wheeljack. Here's what he has to say about it.

I have pleasant memories of this scientist, the second robot that we see.
For this illustration I decided to draw with a gun that appears in the episode in which Megatron challenged to Prime in a duel.
Wheeljack tries to shoot Megatron, but the gun explodes in his hands.
He is a character that attracts a lot, I guess because at that time the model was very spectacular car. Also, every time he spoke lights glowed, that gave personality, I think it was a good idea.
He is a friendly and exemplary character.

Yay, Wheeljack! A favorite character of mine and very nicely represented here. I love your work, Iván. (Note: In the cartoon, he's actually the first robot that we see. Bumblebee's the second!)