In honor of Zobovor's most excellent review of Universe Hound & Ravage, I thought I'd post another of my armies. This time, it's clones of the nefarious Ravage!

I've been itching for an army of Ravage clones ever since I read Devil's Due's second G.I. Joe vs Transformers crossover. Members of the Joe & Cobra teams are scattered throughout time, tasked with tracking down lost Transformers. One team winds up in a dystopian future ruled by Decepticons. There are hordes of Sweeps, Insecticons (ho-hum) and . . . Ravage clones? AWESOME! Now I have an excuse to army-build on this guy. 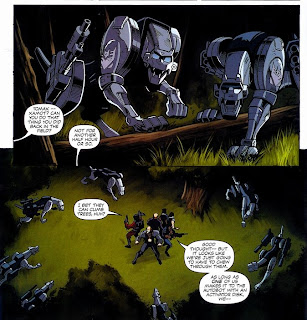 I've been holding of on pulling the trigger on my Ravage collection, though. The original Ravage figure is nice, but it's a bit . . . flat. It'd be hard to pose a group of him and make them all look different. This new Ravage figure, with its excellent range of motion and its three dimensional feel, fit the bill perfectly.

I toyed with the idea of painting one of these things into Howlback colors, so I'd have a general, but there's really nothing in the story to support that. I think perhaps a better leader designation would be to plop the original Ravage's weapons on one of the toys.

I hope you enjoy my Ravage clone army. Which brings me to my next point . . . anyone want to buy a Hound (or three?).
Posted by Jimtron at 8:41 AM

Good God, man, how many Hounds have you bought!

And, unfortunately, I really want that ravage as well, so buying a solo Hound seems a tad pointless, no?

Maybe if I ever wanted to do a Detritus kitbash I'd hit you up.