The writing and art team of Furman and Collins remain unchanged from the previous two issues as Brawn and Starscream begin their epic one-on-one battle.

The cover is, yet again, an interior panel, but at least this, like last week’s, is in colour whereas its internal counterpart is in black and white. It shows Brawn leaping at Starscream from on high. Starscream is in jet mode, so this would have to have been an extremely well-timed jump, but the picture sells the interior action content reasonably well. The yellow banner at the top invites us to “Win a valiant turtle!” which, if I’m right, I remember from infant school. A plastic robot turtle thing that crawled around on a large piece of paper drawing shapes from a computer. It appears that they still sell them: http://www.valiant-technology.com/acatalog/Online_Catalogue_Turtle_8.html . I’ve no idea what Matt the Cat is or was (some sort of cat, presumably) and his ad gets in the way rather, shrinking the cover image unnecessarily.

The entire issue consists of the battle between Brawn and Starscream, the opening blows of which were landed last time. Brawn begins by hurling rocks about, implausibly causing Starscream to take evasive action in jet mode. Land Rover against F14 is, on the surface, a rather mismatched contest, but Furman manages to sell it as a tense game of cat and mouse. Behind the scenes, the Autobots and Decepticons look on. Optimus Prime is concerned (he should be, he basically just sent Brawn to his death at Megatron’s whim). But he wonders where Mirage, Brawn’s observer has got to. This sounds important - if you’re going to pull some sort of last minute switcheroo - Mirage, as per his name, is your bot to make it happen. Whatever trick Megatron has up his sleeve, however, is less subtle, as he has sent Ravage armed with an extremely large gun, to make sure the fight ends the way he wants it to. Brawn’s leap of desperation onto Starscream, as depicted on the cover, ends badly for him, as Starscream transforms and sends his plummeting to the ground. Tired, wounded, he crawls into a nearby cave, where Mirage waits, unseen. Unrelenting, Starscream launches two missiles. Is this the end for Brawn?

Because of the high action quotient, Furman’s script is more sparse than usual, but it still contains all the stylistic markers that make it uniquely his. Phrases like “each clash blurring into the next” and “Only one must survive!” really sell the desperation of the situation. Furman really knows how to have fun with dramatic language, while skilfully avoiding descent into self-parody.

The art is exciting and well drawn, following on perfectly from the previous two instalments, but Brawn’s robot mode now looks at its most ridiculous in action, with its spindly hooked arms hurling huge boulders about. This isn’t, however, Collins’ fault, but the fault of

whoever (Bob Budiansky, presumably) who decided that the Autobot with the thinnest, reediest arms, would be called Brawn and would have strength as his major characteristic. I particularly enjoy the image of Ravage with his back mounted gun. This was not a toy accessory, but looks excellent on top of, and plugged into, a very expressive Ravage. Hart’s colours, as normal, are of a high standard, but do not continue throughout every page.

Overall, I have fewer problems with Part 4 than I did with Part 3, because events, out of character as they are, have already been set in motion, and the action and drama rattles on at a decent pace. Brawn vs Starscream is a very interesting choice for such an early match-up, as, on paper, they don’t really have anything in common. This is clearly a symptom of a comic struggling to find its identity in its early issues, and trying out characters in the hopes that something sticks. 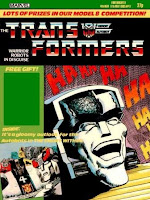 Furman and Collins conclude a story that has been all Furman’s writing, and mostly Collins’ art.

Two internal panels are mounted together on the cover: Megatron bellowing out an evil laugh, and a group of Autobots looking worried. The caption suggests “a gloomy outlook for the Autobots” which would tie in with Brawn’s apparent destruction in the preceding issue.

The issue starts with Starscream’s missiles exploding dramatically. The Autobots are shocked at Brawn’s apparent demise but Optimus Prime remains quiet. Is he too stunned to betray his feelings, or is there something else in the works? Starscream flies off, happy that he has won his trial by combat, however Megatron, concerned that this might be the outcome, has positioned Ravage, complete with what appears to be artillery mounted on his back to take Starscream down, which he does, brutally, but in secret. Soundwave is confused, having observed Starscream’s victory, but Ravage, having lost his cannon, tells the Decepticons that it was the Autobot observer that fired on Starscream. Megatron, never one to let a good asset go to waste, orders Starscream’s reassembly. The Autobots, meanwhile, are mourning Brawn, until, at least, Brawn himself appears! It turns out that it was all a trick (who knew?). Mirage, in the same accident as Brawn, discovered that his ability to project holograms was increased “a thousand-fold”. He used a hologram to convince the Decepticons of Brawn’s destruction, then snuck him to safety, all under the orders of Optimus Prime. Megatron, is, for a change, furious. He has somehow (maybe they checked for wreckage) discovered that he was tricked, and is now urging his troops into a battle frenzy. He has decided that it is now time to attack the Autobots, although, when Starscream said it maybe a day before, it was too soon. This sets the stage for the next story: “Raiders of the Last Ark!”

While my love for Furman’s phraseology continues unabated, I have to say that with this story, his plotting still leaves something to be desired. We are presumably supposed to be happy that Prime was fairly sure, all along, that Brawn would not be destroyed, but he was still placed in harm’s way unnecessarily, to atone for a crime that was clearly not his fault. And what did the elaborate plan achieve? Starscream did win, easily, and would have got off scot-free if it hadn’t been for the machinations of Megatron and Ravage, which the Autobots did not know about. Starscream’s damage is clearly reparable in any case, although he does not actually appear in the next story, which is nice continuity.

The crux of the plot, Mirage’s hitherto unmentioned new ability to project gigantic illusions doesn‘t really work dramatically, since it was pulled out at the last minute. Although it does tie into a single panel from a couple of issues earlier where Mirage tells Prime that he was affected by the accident too. Arguably this clue was too subtle, separated as it was by weeks of story, and I had taken it to mean that he felt guilty and wanted to appeal on Brawn’s behalf. I enjoy an arc plotted in advance, but I feel a little more foreshadowing would have been necessary to really make the idea work. In any ev 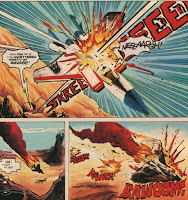 ent, the trial by combat has to rank as a low point of Optimus Prime’s leadership, even if Brawn was in slightly less danger than he had at first supposed. When it becomes clear that the entire battle was unnecessary, the final reveal loses most, if not all, of its impact.

Collins’ rounds off the story with some typically on form artwork. The three panel sequence of Starscream crashing is probably the standout. Pleasingly, most of this issue is in colour, but as its only five pages long, its not particularly good news.

Overall, Furman writes dialogue well, but he did not yet fully understand the characters when he wrote this arc, so the plotting feels too out of character to be a classic story. Of course, there is no doubt that he will get a handle on this universe before very much longer.
Posted by Bishbot at 4:02 AM