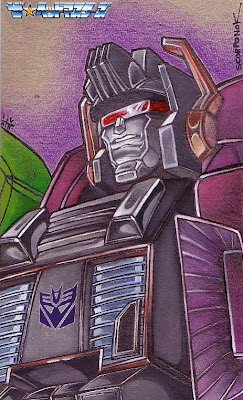 It's Monday, so time for another installment of Iván's Gallery. To celebrate the most excellent Maximum Dinobots series, Iván brings us the mighty Scorponok! Here's what he has to say about it:

Scorponok ... Incredible character!
We can analyze it in two ways, on the one hand, we have the toy, highlighted by its size and color,
I always though that was a bit bothersome smaller fortress maximus, but , no problem.
Unlike many other toys transformers, scorponok was well supplied.
However, I believe that in the Marvel comics is where else take the character and power.
The saga of the submarine base, I especially liked, Well, I think this is the time I like the Marvel comics.
On the other hand we have the character in the place where animation is completely missed.
But later saw his remold called Lord Zarak, here if it was okay, he was a leader.
In this new era of IDW currently believe that the spirit of the character.
Anyway, I've always scorponok seen as one of the most prominent within the universe transfomer
Deserves a spotlight and a place of honor in the squadron decepticon,
only regret that there have been many different views along the history.
That´s all !!!

Another great picture Ivan. Scorponok has always been one of my very favourite characters and you draw him well.