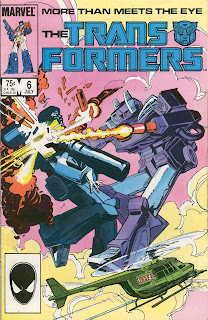 The Worse of Two Evils! is the sixth issue of the Transformers series from Marvel. The creative staff is unchanged from the prior issue; Bob Budiansky continues to hold the writing reins, Alan Kupperberg pencils and inks, Yomtov colors, Parker letters and Owsley editis. The cover is also by Kupperberg.

The cover is decent, though not the tour de force from #5. Shockwave and Megatron battle among pink and yellow clouds, with an Air Force helicopter in the background. Shockwave appears to have the upper hand, as he's blasting Megatron's fusion cannon apart. It's servicably dynamic and fairly representative of what happens in the book, but I can't help but feel that the gloud environment is a bit of a cheat to avoid having them standing on the ground. I get the impression that the helicopter was added as an afterthought to sell the whole 'flying' thing.

Moving on to the interior, Budiansky once again delivers a solid plot that flows directly out of the last issue. Shockwave, who early on last issue learned of an advanced oil platform, departed at the end of #5 stating that he was going to go take some human resources. We now see where he went - that selfsame oil platform, the most advanced on earth. Improbably, the platform is armed to the teeth with wire-guided surface-to-air harpoons, armed one-man hovercopters, and automated mortar cannons. It takes Shockwave a full seven pages to subdue this platform. Some of that might be because he chooses to do it entirely in space gun mode, a fact which Furman will clevarly take advantage of years later. He finally transforms to robot mode on page eight to tell a cowed population to return to the mainland - the Decepticon conquest of Earth has begun.

This whole sequence seems awkward. While the idea of Shockwave seizing an advanced oil platform makes sense, I never bought how well armed this is. Who was G.B. Blackrock defending against? More believable was Josie Beller's injuries. As a result of the battle, she was fried by electrical feedback. This subplot will continue to simmer for several issues before erupting.

After conquring the platform, Shockwave orders all functioning Decepticons to relocate there. It's defensible and generates energy, and so it's a far more logical base than the crashed Ark. The Decepticons are quick to obey, which infuriates a Megatron still hooked up to life support systems. Budiansky does a good job at differentiating the command styles of Shockwave and Megatron. Megatron rules from emotion, Shockwave from logic.

Finally, ten pages in, we get our first Autobot. (All Hail Megatron issue #1 almost echos this and the last issue, with Decepticons running roughshod over Earth and the Autobots nearly wiped out. But I digress.) Buster stands before Optimus' head, picking up from last issue's cliffhanger. Placing this sequence here, in the middle of the story, was a good choice. It kept the tension from the last issue in play all throughout Shockwave's action. Prime tells Buster he's the last hope of the Autobots, and has the human connect wires to his temples for a mindlink. When Buster does, though, a huge electrical charge knocks him out. There is some nice symmetry here, between Buster and Josie. Both would, in future issues, receive superpowers from these electric blasts. Meanwhile, Ratchet, outside, has nothing to do but watch and wait. Budiansky sneaks some exposition into his thought bubble regarding Shockwave's presence on Earth.

Next comes the bridge. Shockwave gloats to Megatron about how well his leadership is going, prompting Megatron to break out of his life support systems the moment Shockwave has left the room. Buster pulls himself to consciousness and stumbles out of the Ark, eyes bloodshot and what's either blood or drool leaking from the corners of his mouth. "The Autobots are all dead!" he informs Ratchet, but before we the audience can dwell on that declaration, battle commences!

Shockwave turns, startled as Megatron calls his name. Megatron is leveling a glowing fusion cannon at his back, and informs old one-eye that he is relieved of command. We next get treated to a beautiful visual of Shockwave flying backwards out of the volcano and crashing into the town below. It's worth noting that crashing shockwave was not drawn by Kupperberg, but most likely by William Johnson who draws the next two issues. Note the toy accurate model in the lower right pannel. Megatron tromps out of the base to finish the job, but Shockwave is waiting. Shockwave is low on energy after his earlier battle, but Megatron is still injured, making it a fair fight. Shockwave takes better advantage of his opponent's weakness, by smacking Megatron with a water tower and shorting him out. He then transforms to space gun mode and blasts Megatron into a crater. Megatron begs for his death, but Shockwave won't grant him even that. Megatron is more valuable alive than dead, so logic demands Megatron be spared. In his head, Megatron swears vengence. Oddly, this battle (and the associated mercy afterwords) takes only seven pages, one less than the decidedly lopsided oil platform battle. I'd have liked to see Megatron last longer before the watertower shorted him out. Other than that, few complaints. The charactersization remains spot-on. Megatron's electrocution continued the pattern started with Josie & Buster, a third victim (directly or indirectly) of Shockwave's ambition. I could have done without this goofey human line in reference to Shockwave, though: "I hope he's not playing for DeForest High this Saturday!"

The denoument is brief, but satisfying. Shockwave drags Megatron's battered carcas back to base, and uses it to have the remaining Decepticons swear absolute fealty to him. They all do so, even a trembling Megatron. Meanwhile, Buster and Ratchet huddle together, experiencing abject despair. It's a good ending, powerful without being overly melodramatic. The Decepticons still seem to have everything going for them, and Buster and Ratchet have little recourse. Shockwave is shaping up to be a great villain, while Megatron is serving well as a foil for him.

The art works less well this issue. Issue five worked well because of powerful imagery. This issue, with two extended fight sequences, seems to play less well to his strengths. Many of the shots are awkward, with the perspective and the modeling a bit off. He still does a very good job with the human drama, but there is less of it. Josie's accident and G.B.'s subsequent reaction to it were both handled well. 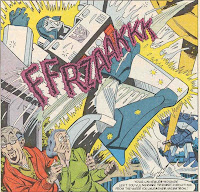 Kudo's to Parker's lettering. His work really sells the various electrocutions / short circuits that we witness. It also subtly emphasizes just how badly Shockwave thrashes Megatron.
Yomtov's coloring has its usual share of errors, but mostly manages to convey the action appropriately.

Overall, a solid issue. This issue continues to steadily ratchet (haha!) up the tension, while giving some great character moments to Shockwave and Megatron. Choosing to focus on just a few characters was a good choice, one that Budansky would often employ throughotu his tenure. It's probably no accident that he grok's them so well, as he's written most of their bios in the first place.
Posted by Jimtron at 9:17 AM

This was, up until a few months ago, the only issue of TRANSFORMERS I didn't own. I had the tiny little Comics Digest version, but the artwork was nearly indistinguishable and the lettering was almost impossible to read.

I love Shockwave in the comic book. Casting him as Megatron's rival for power makes him so much more fascinating than he was portrayed in the cartoon, essentially serving as Cybertron's babysitter.

Rick Parker is also my favorite lettterer. (Is that a word?) He came back later for the Furman run and did the final issues of the comic, so I associate his lettering with the best issues of the series.

Shame that the quality of Alans art isnt as same as on the cover.Pretty much shows that he can do a pretty decent job.

"Who was G.B. Blackrock defending against? "
Pirates?
Coooooobra? :3

You know those CEO-types. Always trying to steal things from each other, by whatever means necessary.

Judging from the ink lines, I'd say the single Shockwave panel but also the cover were done by the same artist, but not Kupperberg. My guess would be William Johnson with inks by Kyle Baker (good call on the Shockwave panel, Jim!). The inking style on the cover seems similar to the interiors in issue # 7.