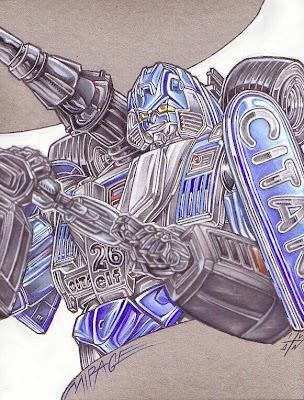 It's Monday, which means that it's time for another installment of Iván's Gallery. This week Iván brings us Mirage. Here's what he has to say about it:

I think Mirage is a misunderstood character.
In general, the duality of the character I have never understood.
In the third chapter of the animation Mirage prevents the decepticons triumph,risks his life, so I can not see him as a traitor.
I do not understand why such treatment is given, I do not think that is a character that lends itself to that.I love having that ability to become invisible and I think it has great potential.
Certainly the toy as autobot, I think that has more aggressive design for all, especially in the face, that design was not as well represented in the animation series.
The new toy is more like its design in animation, but I think that is too thin, I stay with 1984.
But I always liked the toy, so I decided to draw that.
The controversial Spotlight of IDW ... I just do not convince, I think it was a good idea, poorly conducted. And now I have no clear role to play.

Iván, I love the flourishes you give your artwork to make all these robots look like they're actually made of shiny metal.