After a brief d 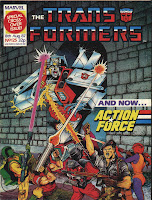 ip into the different, but still-canon, waters of the 1988 annual (August 1987) we return to the main biweekly comic book with a story called Ancient Relics. As mentioned in my review of the annual stories, the publishers rather took the mickey and had the very last part of the long and epic Galvatron returning storyline as an annual exclusive. Since that story concluded the UK book had also reprinted US issues #28 and #29 in which Blaster and Goldbug go on the run, and Blaster is infected with Scraplets, a horrible metal parasite.

Whoever was responsible for the cover has been lost to the sands of time and perhaps with good reason, as it is truly horrible. It depicts Blades being mistakenly fired on by Action Force, and I suppose Blades looks all right, but look how weird and pasted on the humans look, and look even more about how unnatural the weapon trails and impacts look.

The issue opens with an unusual but extremely effective sequence straight out of a horror movie, (or, for those of you with a more 90's disposition, it'll probably remind you of The X-Files). A group of archaeologists and a "serious potholer" are exploring some ancient Roman sewer tunnels beneath London. As they are expressing glee at how well preserved everything is they run in to something huge and metallic. They look up... and up... and find themselves staring in horror at the half-ruined face of Megatron!

His gigantic fist swings round and smashes a section of the tunnel. The humans dodge the fist but unfortunately only Susan Hoffman, the only female scientist, is fast enough to escape the falling masonry. This isn't a graphic scene - the way it is drawn the humans coul 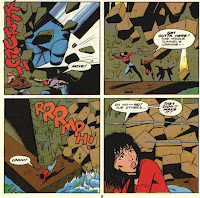 d have been on the wrong side of the barrier, but they don't feature in the rest of the story and Megatron was back there, so draw your own conclusion. Either way, I tend to document human casualties in these stories as they are usually carefully quite light, so any definite deaths are notable. "They didn't make it" is usually a synonym "they've been killed" anyway.

Back in the Autobot base in Oregon, Grimlock, still the Autobot leader, is complaining that no-one is coming to his meetings. Wheeljack points out that the Dinobot has been sending Autobots out on constant pointless missions to exercise his authority and so there is no-one left in the base. Wheeljack is himself angry with Grimlock because he has been ordered to repair Centurion, Professor Morris's non-sentient robotic avatar (In The National Interest among other stories) over Autobots who have been lying injured for months. Grimlock tells Wheeljack that Centurion is his friend. Wheeljack is unimpressed, but tells him that he has finished and that Centurion is repaired and improved (including, for some reason, a much more human looking face with a mouth). Grimlock tells Wheeljack that he needs Centurion right now, because Blades has found Blaster and Goldbug (still on the run from...) in London.

Blades is annoyed because he has only detected a Transformer signal. He doesn't know that it's the "deserters" as Grimlock calls them and in any case, he can see their point of view, as Grimlock is a terrible leader.

While Blades ponders on his question, the story moves below ground where we meet Action Force for the first time. Action Force are the UK version of GI-Joe and although audiences on both sides of the pond are now totally familiar with the US version I'm going to go with Action Force for these reviews, as that's what's printed in the comic. They're in the London tunnels to hunt the monster that Susan Hoffman reported and, true to the spirit of these things, she's along to show them where she saw it.

Scarlett, for one, is not impressed by the archaeologist and thinks that they are wasting their time. Flint is quick to silence her, pointing out they have a job to do, and the mission continues. Before much more can be said Blades appears in the tunnel and, quite understandably, Hoffman identifies him as her monster. Action Force open fire with everything they have (which is loads!). Blades is knocked off balance and angered. He fires a blinding blast to disable the humans and then considers taking proportional revenge before coming to his senses and greeting Action Force. 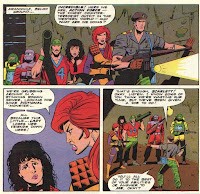 ffman confirms that now she can see Blades better he isn't her monster but just at that moment the Autobot is hit in the back by a blast of energy and the real threat emerges, huge, damaged, and clearly insane - Megatron is back!

One of the things I really love about this issue is how dramatically different it is from the big time-travelling Galvatron saga we have just been through. Furman could have gone a little further with the monster movie stuff. I love the image of Action Force tracking these alien monsters through shadowy tunnels, but what we got was excellent.

It's pretty weird to see GI-Joe (effectively) running around London, and I'm afraid I cannot put myself sufficiently into the mindset of kids who, not knowing any better, thought of Action Force as a British team. Then again, it'd be weird to see GI-Joe anywhere, and they don't only operate in the US. We do have some rather compressed storytelling here, although that's not always a bad thing. It's difficult to join the dots from one crazy woman talking about monsters in the sewer to deploying the heavy-weapons toting might of Action Force but I suppose the Transformers haven't always been inconspicuous since their arrival, and in this universe it's probably better to be safe than sorry when it comes to reports of "monsters".

Action Force don't get much of an introduction, but that's probably due to the UK Transformers comic using Action Force strips as backup storylines, so most readers would be pretty familiar with the characters.

This is one of the few Furman comics that tie into the "Grimlock as leader" concept. One gets the feeling that at this point he was using the Transformers: The Movie cast in order to avoid stepping on Bob Budiansky's toes across the Atlantic. It is also possible that Furman, Grimlock-lover as he is, was not comfortable depicting his favourite Transformer as a crude and bullying tyrant and avoided it up to this point.

A bit of a gripe in terms of continuity is that there is no indication that Centurion is piloted by an outside influence. Professor Morris isn't mentioned at all, which is a shame, and with his new face and all, Centurion looks a lot like an Autobot. It isn't even mentioned that he isn't one, which would cause infrequent readers to get the wrong idea and confuse regular readers. 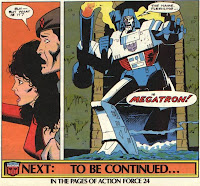 Geoff Senior's pencils are crisp, clear and precise, as ever. He gets to draw more humans than usual in this story and he handles this duty as well as he does the robots although I do rather get the impression that he has a few stock faces, especially for women, as Scarlett's angry appearance here rather looks to me like some of his other work, particularly further into the US run and in the Dragon Claws comic. I am a big fan of Megatron's ruined face, which is actually carried over from his most recent appearance in the US comic.

A very fun new direction for the storyline, all in all. Provided you don't mind mixing some Action Force in with your Transformers, this is shaping up to be an interesting saga.

(PS - don't worry - it's coming - stand by for complicated and contrived explanations of which Megatron is which, where and why, in upcoming reviews - it's a continuity nightmare, and we love it!)
Posted by Bishbot at 11:55 AM

I'd just like to point something out. You state that British readers would have thought of Action Force as a British team. I was reading both Action Force and Transformers at the time and thought nothing of the sort. The team was written as an international team, with both UK, American, European and other nations included (unlike the US version which was predominantly American).

So the idea of Action Force in London was no more strange than them being in the USA or Paris to us at that time.

This was also true of the Toy Bios in the UK.

The cover was by Jeff Anderson.

Action Force was branded as an international team with some hilarious changes of nationality - practical joker Airtight was German, cowboy Wild Bill was British from the very unWild West of Hull and flyboy Ace was a French Canadian! Material from the US G.I. Joe titles was reprinted in the UK (and presented as the adventures of Action Force's US branch) but with some modifications for names & continuity, and also in a more mixed order. One result is a continuity with some problems that make even the classic TF conundrums (such as the one Ancient Relics begins...) look simple by contrast.

That said I think some confusion has subsequently sprung up, possibly because the later Action Force Monthly title was also sold in the US under the title "G.I. Joe European Missions" with promotional statements claiming that Action Force was the name the team operated under locally. And when the toyline & reprint strip adopted the name "G.I. Joe: The Action Force" the explanatory mini-comic "Divided We Fall" (run in TF #245) presented G.I. Joe and Action Force as separate organisations coming together, in contradiction to how Marvel had previously handled things.

Anonymous - Sorry if I wasn't as clear as I could be. I meant that I couldn't help but take it from the perspective of a modern reader who knows all about GI-Joe.

Tim - Great info as usual - That's seriously Jeff Anderson? Ouch... I knew Wild Bill was supposedly from Hull(!?), so had presumed a UK team - I guess I should edit that. To be honest, given GI-Joe reappear in G2 it really makes a lot more sense if I mentally train myself to read GI-Joe instead of Action Force.

I never had much confusion with the Action Force/G.I.Joe confusion – partly because I didn’t read much of the UK weekly comic, so didn’t have to cope with their near-impossible task of matching two very different continuities (much further apart than the UK/US Transformers, and with no ‘time-travel/future’ storyline to ease the pressure).

It wasn’t even a problem when G.I.Joe became the regular back-up strip to Transformers (despite them being U.S. stories with rewritten speech bubbles). I’d say this was due to the writing styles: Larry Hama’s G.I.Joe felt very military and realistic (as much as it could be), the team writing Action Force (I think Simon Furman took some, but not all, of the stories) made them more like a superhero team with military hardware (closer to Thunderbirds, I guess). No criticism of either style, but so different it made it easier to discern the two brands.

And another gripe about Marvel’s cross-marketing: it was a let-down that the rest of this story (dealing with the really exciting event of Megatron’s return) was continued in the Action Force comic (back then, pocket money would only stretch so far). It can’t have been much fun either if you were a purely-Action Force fan, to have five or so issues given over to a story that was much more significant to Transformers.

Good points Chuffer - I feel, given the way all the superhero books were (and are) we were lucky not get more of this sort of thing.