Bish's Review Space: Above and Beyond Episode 10: Stay With The Dead

"Everytime I close my eyes I hear this voice, like, I don't know, familiar, over and over 'stay with the dead.'" - West

ith The Dead was written by Matt Kiene and Joe Reinkemeyer and directed by Thomas J. Wright.

West is found wounded and shipped back to the Saratoga to be treated. He is plagued by dreams and flashbacks that suggest the rest of the 58th are still alive despite being constantly told otherwise, including a tape of his own distress call. Just as he is about to have electro-shock therapy that will calm his delusions but destroy his long-term memory he remembers the truth: he made the distress call as a decoy for the Chigs to fall into a trap and the 58th had to retreat. He remembers the co-ordinates of the fallback position and the squadron are saved.

The Good
Stay With The Dead continues Space: Above and Beyond's excellent record with atmosphere. The hospital transport in the cold open is suitably horrifying and effective. We even get a sense that the medics, who we never really get to know that well are nervous as the wounded arrive. Very understandable, and a nice human touch to characters who later exist mostly to block West's attempts to get to the truth "for his own good."

The hospital equipment draws a good line between flashy and all too familiar. West's first day or so of treatment, lying in bed, unable to talk and filled with tubes is quite harrowing. Morgan Weisser really acts his socks off in this episode and portrays West's trauma very believably. James Morrison is also on fine form as McQueen, forced to confront his own demons about the loss of the Angry Angels as he sees West in the same state.

The flashback structure is fairly interesting, and shows us some more interesting facts about the Chigs. They booby-trap wounded enemy combatants and they show no compunction about killing red cross crews. Of course our heroes find this unconscienable, and anyone in that situation would, but it does serve to drive home the point that these are aliens we're fighting, not just humans with different hats.

In a similar vein, Space: Above and Beyond has always been quite good at using genuinely different concepts to portray convincingly alien planets that they don't have the budget or techniques in place to do with cgi or set dressing. In this case the planet the 58th fight over has a great deal of static electricity and we get told this makes your mouth very dry. It's a small thing, but it's clear that someone on the writing team cared enough to try to differentiate the various locations with actual science-fiction concepts, even if

they are all just places in California.

I really liked that the reason West kept telling himself to "stay with the dead" was because the trap the 58th set up for the Chigs used some marine corpses as bait and it was a nice bit of symmetry to have him use the same phrase to convince the stranded Wildcards that a rescue was the real deal.

The Bad
The problem here is that the plot is fundamentally broken, and I see this without even thinking this is a particularly bad episode. There are a lot of strong performances and good writing on display, but in a series like this you simply cannot maintain suspense with this plot. We know that the 58th can't be dead - television doesn't, it can't, work like that. I feel like I've seen this plot several times on different shows and they all have the same problem. The viewer finds themselves just killing time until the inevitable turnaround. There is merit in bringing the lead character as low as possible and watching him cope with it: the distress call in his own voice was a good trick although there had to be an explanation.

As well as this, the deadline involving the threat of electro-shock treatment is just ridiculous. While it is controversial medicine, there is no evidence that it would definitely and without any doubt whatsoever strip West of his ability to remember what had really happened. I suppose this could have been some magic space electro-shock but it doesn't feel right. It would definitely have affected West's ability to be a marine, there's probably enough drama in that to work, but I could not believe that the treatment would be so severe that there was no hope of West keeping his memory after just one jolt. Why would that ever be a recommended treatment? The problem is that, fundamental plot problems aside, the episode was pretty watchable: there was some good acting from Weisser, some exciting action in the flashbacks to the planet and everything was hanging together, if not remarkably, then at least entertainingly but then the electro-shock subplot comes up 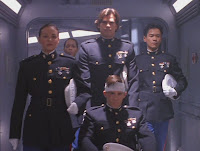 and the episode takes a bit of a nosedive.

Overall though, Stay With The Dead is a fairly decent hour of television, a tired but serviceable plot kept alive by Space: Above and Beyond's general air of quality and seriousness, which is pretty ingrained by this point. I'm not sure I should give this episode a pass, but it entertained me, so I'm going to.

There weren't really any references to history, real or made up, which was a little disappointing.

Space Above and Beyond - The Complete Series

is available as a very affordable box set, and you should buy it and watch it, and then come on here and disagree with me about everything.
Posted by Bishbot at 1:14 PM