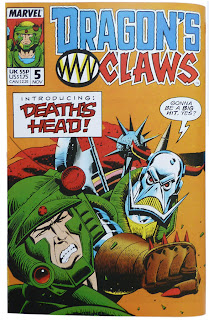 Before he finally got his own series, Death’s Head had one more guest spot. ‘Dragon’s Claws’ was a late- 80s Marvel UK title, the first of several US-format monthlies (‘Death’s Head’ itself was close behind). From the creative team of Simon Furman and Geoff Senior, it was the story of an enforcement team (the eponymous ‘Dragon’s Claws’) trying to bring order to a far-future dystopia. Sadly lasting only 10 issues, it is a cracking series and one I’d thoroughly recommend.

The creative line-up for the series was fairly consistent. Dragon’s Claws #5 had writer Simon Furman, artist Geoff Senior, letterer Annie Halfacre, colourist Steve White and editor Richard Starkings. No credit for the cover , but my guess is Senior.

The cover is a nice one. The guest star is prominent, delivering a solid punch to the titular hero, Dragon, who certainly looks to be feeling it. The background is plain, which centres attention on the two figures. The text (“Introducing: Death’s Head!”) works with the mechanoid delivering one of his trademark, half-to-the-audience, puns: “Gonna be a big hit, yes?”.

An interesting alternate cover has surfaced on the blog It Came From Darkmoor - Death’s Head standing triumphant over the whole team. Impressive, but not story-accurate, and a little too defeatist for a title about the Claws. The stance is near-identical to the fantastic splash page anyway, which leads us to…

“The ‘Pool, Northern England ,” the captions explain, “ an unsavoury place populated by unsavoury people … whose numbers have just risen by one!”. Surrounded by crackling energy and smouldering fires, red cape resplendent, Death’s Head is shaking both fists in anger after being tricked by Doctor Who, “but as I always say in these situations don’t get mad … kill something, yes?”.

His arrival has been noticed by Cousin Bob and Cousin Rob, two cyberpunk-types armed with flamethrowers and redneck accents. The pair belong to ‘The Jones Boys’ gang and mistake Death’s Head for one of ‘The Evil Dead’ (their rivals and the main villains of the series, recovering from defeat and holed up nearby). Seeking information, Death’s Head remains calm, though Cousin Bob is unconvinced and treats him to a large helping of flamethrower.

With slow menace, Death’s Head emerges from the fire, affixing his shottblaster, “You were doing fine for a while. Then you made the mistake. You got me mad, yes?”. He quickly executes the cousins, and is spotted by a heavily-armoured police transport. Without missing a beat, he attaches a missile and blows the craft to pieces. As he laments all this killing for free, he is approached by Death Nell, a member of the Evil Dead. Unlike the others, she sensibly wishes to hire him.

The scene switches to Dragon’s Claws and their London base. Dragon is suspicious about N.U.R.S.E., the organisation that reactivated his team, and presses Stenson, a N .U.R.S.E. executive, for answers. He is stopped by Deller, N.U.R.S.E.’s military liaison (and Dragon’s rival) who reports the disturbance in The ‘Pool and blames The Jones Boys. The whole team springs into action.

Back at The ‘Pool, The Jones Boys are raiding the Evil Dead’s stronghold for money, weapons and explosives. Their leader, Incinerator Jones, is motivated not by greed, but fear of punishment for their ‘non-payment’ to an unnamed agency. Death’s Head’s contract is to stop them and Death Nell reveals his payment: a room full of medicine, the most precious commodity in this diseased age. He picks up a rifle, ready to go to work.

Investigating the police wreckage, Dragon’s Claws hear a nearby explosion at the Evil Dead’s stronghold. They arrive to see Death’s Head taking on The Jones Boys and quickly join the battle. Using the distraction, Death Nell helps her injured leader, Slaughterhouse, to escape.

Viewing the Claws as competition, Death’s Head declares that he won’t ‘split the bounty’ with them. This initiates a debate with the righteous Dragon about how government enforcers are no different from himself. “All do someone else’s dirty work for them and pick up their pay cheque at the end of the week, huh?”.

The rest of the Claws finish off The Jones Boys, with Incinerator Jones dealt a mortal wound by the team’s martial artist, Mercy. His dying confession is that N.U.R.S.E. have been using Dragon’s Claws as hired killers. Mercy’s response is a cold, “Yeah … So what?!”.

The debate between Dragon and Death’s Head is cut short when Deller sneaks around and shoots the mechanoid in the back. Admiring the underhand tactics, Death’s Head returns fire, hitting Deller in the left shoulder (a popular spot – in ten issues, he gets wounded there three times). After a brief scuffle, Dragon orders the Claws to retreat and faces Death’s Head alone.

Dragon tricks Death’s Head by shooting at the crates of explosives directly behind him. In a massive detonation that blows off both his legs, Death’s Head is consumed by the inferno. Knocked to the ground, Dragon’s ankle is suddenly seized by an exoskeletal hand and what remains of Death’s Head drags itself out from the flames.

Steel, one of the Claws, returns to free Dragon and they both flee as the legless and one-handed Death’s Head calls them back to fight (shades of Monty Python’s Black Knight there). The building then collapses on the mechanoid, as he decides that he may just have to cut his losses on this contract…

Phew! Anyone who bought the issue because of Death’s Head (as I did) certainly got their money’s worth. From his first magnificent appearance, he dominates; driving forward the plot and hammering heroes and villains alike. Despite meeting an untimely end, this story really does show off Death’s Head at his finest: dumped in an unfamiliar and dangerous world, he immediately adapts to his surroundings. I like that he is polite and business-like when he needs to be; but when fighting begins, he goes all-out, destroying anything in his way without hesitation. The lawless, violent Greater Britain of 8162 is a good setting for him, especially as the Wild West bounty hunter that Furman originally envisaged.

As an interesting point: this defeat by Dragon makes it the second time in a row he’s been tricked by someone he underestimated. After hunting down Transformers, it seems that Death’s Head is having a hard time coping with humans.

It could be argued that Death’s Head actually occupies too much space for a guest. The reason the other Claws were hardly mentioned in the recap is because – with the exception of Dragon and Deller – they don’t really get much time. That said, one of the main threads of the series is whether Dragon’s Claws are a force for good, or just hired enforcers, so thematically it’s a good time to introduce a paid killer for some home truths. “Who decides who the deserving cases are, eh?”.

The plot goes at a breathtaking pace, almost all action, but barely a panel wasted. The series arc is further developed by some ominous portents from both Stenson and Slaughterhouse (as well as a great cliffhanger final page concerning Dragon’s family). It’s typical Furman that even a throwaway character like Incinerator Jones (barely a page’s worth of appearance in total) has a depth that goes beyond a cardboard goon. It was a nice touch that Jones’ dying breath was heard by Mercy – arguably the most cynical of the Claws – and so wasted. 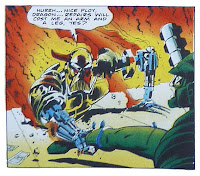 Senior’s artwork is always top-notch, and I’d rate this among the strongest in the whole series. The decaying ruins of The ‘Pool make a great post-apocalyptic backdrop, especially The Evil Dead’s Greyskull-like fortress. There’s a lot of fire depicted in this issue; it has a nice kinetic quality (rather than repeating squiggly lines) and the colours make a sharp contrast to the dark setting (the whole episode takes place at night).

There’s a good image of Mercy leaping against a blast of flames – but that’s really all the standout images the Claws get. In the same way as the writing, the artwork also centres on Death’s Head. As well as the full splash, there are two great images of him wreathed in fire: the first when he terrifies the Jones Boys; the second when he crawls out of the explosion like the Terminator (with James Bond’s sense of humour, “Repairs will cost me an arm and a leg, yes?”).

(I could quibble that having Death’s Head appear from flames on two occasions diminishes the impact of the second – more important – image. But it would be a shame to lose either.)

With such an energetic issue, there are some nice touches to be picked up on the second reading – a moment of subtle humour when Cousin Rob plunges a knife into Death’s Head’s chest, only for it to buckle and the mechanoid to look down on it, unimpressed. I also like the foreshadowing of the explosive crates being visible – but not obvious – before they became important to the plot.

In all, a classic issue – a bit more than the lion’s share of the story for a guest spot, but I think any Dragon Claw’s fan would be too busy enjoying the story to feel short-changed.

Next week, whatever’s left of the mechanoid begins his very own series as we recall his past adventures: Death’s Head Revisited!

I have never read this comic (only saw the scans you put up), but based off the pictures, Steve White's coloring (assuming its the same Steve) appears very different from his coloring on Transformers. It appears to use more gradient effects, both in the characters and backgrounds, something he refrained from doing in the TF works. Rather interesting coloring work on this one,

Dragons Claws was a fairly mixed bag, Death's Head was definitely a much stronger title. I liked both, but preferred Death's Head.

Sad that Marvel UK was closed down and the US side have pretty much forgotten the whole thing. I'd love to see a return to 8162.

The panel of Death's Head crawling out of the fire is incredibly striking and well rendered. A bit reminiscent of the Terminator.

No mistaking the angle of that fist on the cover... definitely Geoff Senior! This was a great story, I always loved it along with the whole Dragon's Claws series. Death's Head being in there was an unbelievable bonus.