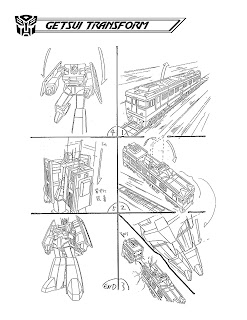 Sorry, took another week off there.  Was very busy last week with Comicon and, um, a project that I can't talk about yet but which will make some of my fans very happy.  What am I talking about?  Hmmmm.....


So, another Comicon has come and gone.  Mostly it's a chance for me to do professional networking, but I did get to do a few panels here and there: Kevin Smith and Young Justice.  Panels were nifty, networking was productive, but overall it's an exhausting experience.  But what makes it fun for me, mostly, is the costumes.  Sme fans do a terrific job.  Here were a few that caught my eye. Me and a poor sod from Dharma.  I wonder if he knows what fate awaits him. 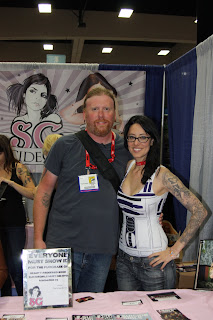 Bill with a Suicide Girl wearing an awesome shirt.  I picked up a nice SG hardcover book this year, my main souvenir. 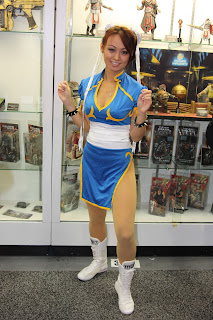 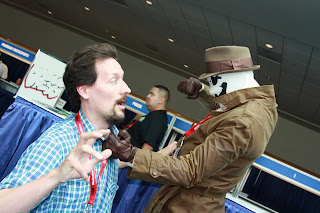 Me getting beaten up by a rather terrifyingly accurate Rorschach.


More to follow later!  Oh, and while I'm on the subject of SDCC, I wanted to mention Crave, a site I've blogged about before and occasionally sit down with for powwows on the collector marketplace.  They're running a SDCC give-away with some Transformers prizes, so if you're looking for a Masterpiece Convoy (and, let's face it, who isn't?) or some other nifty toys (Boba Fett, Amazon gift cards) then you might want to head over to www.crave.com/comicon.  You've got till the end of the month, so don't dally!
Posted by Jimtron at 8:53 AM

You guys had lots o fun, I'm jealous. Hope you have another Ark book in the works, I'd love that!