Bish's Review Space Above and Beyond Episode 12: Who Monitors The Birds?

"Who monitors the birds?" - Hawkes

sode of Space: Above and Beyond was written by series creators Glen Morgan and James Wong and directed by Winrich Kolbe.

Promised a discharge from his sentence to the marines,Hawkes is recruited for an assasination mission deep behind enemy lines. After his partner is killed he goes on the run. Alone in enemy territory he has to stay alive and evade capture, while having hallucinations and flashbacks to the In Vitro education program. When finally an extraction arrives, Hawkes destroys his discharge papers and prepares to rejoin his comrades.

The GoodWho Monitors The Birds? is structurally the most ambitious episode of Space: Above and Beyond to date. The dialogue is limited to only a few lines in only about three key flashback scenes, with the rest of the action following Hawkes as he struggles to stay one step ahead of the Chig patrols.

Rodney Rowland steps up to the challenge admirably. Just because he doesn't have much dialogue doesn't mean he doesn't have to carry the show and his physical performance is excellent. Hawkes' exhaustion, both physical and mental, is draining to watch and seeing a flashback to a younger version of Hawkes, stiff, emotionally stunted and naive, being brainwashed to fight for America, is deeply sinister.

Obviously, with dialogue scarcely a concern, it is the direction that must come to the fore, and Who Monitors The Birds? is a fascinating watch. My favourite bit of directorial craft is a moment where Hawkes, in desperation, leaps into a river to escape and the scene immediately cuts to a flashback of his birth, sliding out of the tube in a splash of fluid. It's an easy connection to make, maybe, but it's still a stylish choice.

Similar is a scene where Hawkes is distracted by a pteradactyl like creature in flight and flashes back to his similar amazement at seeing a bird in flight from the window of the education facility. The title is reflective of this, as he is amazed that the bird seems so fre 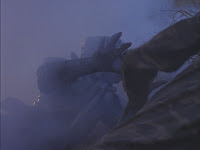 e while his life is controlled by the sinister "monitors", so he, quite innocently, asks that question, and gets into trouble for it. A Chig walks close by and Hawkes is about to fire before he sees that the alien, too, is fascinated by the creature, and lets it go on its way. I always appreciate the way Space tries to add layers of ambiguity to Chig behaviour and show common ground between the two sides. By this point in the series it is very clear that the Chigs are not by any means pure evil.

On this theme, there is a lovely scene where Hawkes has the better of a Chig and it surrenders, throwing up its four-fingered hands in a very human gesture. It offers Hawkes its dog-tag thing that it keeps on its chest-plate and he gives it a ring in exchange. In the next scene he is jumped by Chigs, kills them, and discovers this individual among them. Heartbroken he takes his ring back, returns the chest-panel and sinks to the ground.

Brave and effective are the moments where Hawkes, exhausted and dehydrated, starts hallucinating a sort of personification of death. This is represented by Vansen, but in a skimpy dress, with pale skin, yellow eyes, and bloody lips.

Almost no dialogue is exchanged in these scenes either, but the chemistry between the two is very well done, and Hawkes' obvious attraction to Vansen is perverted effectively by his dire circumstances and mental state. She really does look nightmarish, and her appearances are heralded by eerie guitar licks that jar brilliantly with the rest of the orchestral soundtrack.

She saves Hawkes by pointing out Chig patrols a couple of times but ultimately he rejects her, casts her aside, and goes to the extraction point. "Until we meet again." she says, mockingly. This is a great illustration of the way death is a constant part of a soldier's life, either aiding him, by taking his enemies, or finally coming for him at the end. Hawkes kills a lot of Chigs, sometimes with Death by his

side, but despite the near hopelessness of his situation he is able to ultimately reject her embrace and survive, for now.

The action is decent and we probably see more pyrotechnics here than in any other episode of Space thus far. There are extended sequences of Hawkes running from small arms fire, mortar fire, and fighting Chigs in hand to hand combat and all are tense and exciting.

The BadNot a lot to worry about here. The Chig costumes are a little stiff and clunky, and perhaps do not move as smoothly in hand to hand combat as might be desirable. In addition, the episode opens with a narration by Hawkes explaining what an In Vitro is and why he does what he does. It's written very clunkily and feels like a very late addition to the script, possibly in response to an executive, nervous about putting out a nearly wordless hour of television.

Other than that, with so little dialogue there are no cheesy lines to criticise, and no bad acting. The story is straightforward but well told and we get a good glimpse into the horror that is the In Vitro program.

Future HistoryA nice continuity nod: the Chig officer that Hawkes is tasked with assasinating was responsible for the attack on the Vesta colony.

Past HistoryThere wasn't enough dialogue for any historical or literary references this week.
Overall Who Monitors The Birds? was an excellent and daring piece of work. It is certainly in the top tier of the episodes I have reviewed so far and from what I recall is among the very best the series has to offer, not that it is entirely representative, breaking the usual ensemble format, as it does.
Space Above and Beyond - The Complete Series

is available in a very affordable boxset. And on the strength of my last two reviews you really should think about checking it out.