The rest of Anci 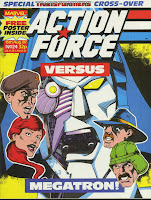 ent Relics took place within the pages of Marvel UK's Action Force book rather than Transformers. While there were Transformers comics still being published at the same time it makes the most sense to put this storyline to bed first, especially given that it's thoroughly in continuity, and with the return of Megatron, is actually pretty important. That's a pretty annoying stunt, but it's nothing like as bad as the tangle Marvel and DC make out of their superhero books to get you to buy them.

The cover to Part 2 was by Lee Sullivan and is a fairly good depiction of Megatron's damaged face with the rather uninspired idea of surrounding it with Action Force mugshots. It's not terrible but the smaller faces aren't integrated very well and really the cover would be more powerful without them.

Part 3's cover was by Jeff Anderson and ably depicts the moment where Wild Bill falls from his destroyed Dragonfly. It's much more dramatic than Part 2 and the anatomy of Wild Bill is pretty good. I don't rate this as a classic cover as it feels too much like a panel from the actual comic than a showcase piece but it is an arresting image.

Part 2 kicks off right where Part 1 left off giving us a little insight into Flint's mind as Megatron lunges into the attack and Action Force beat a swift retreat!

They hurtle out of the sewers only to be confronted by Grimlock (looking adorable with his tiny arms raised above his head) and Centurion. Grimlock is impatient to discover humans when he was expecting Transformers. Before he can say much more, however, Megatron bursts fists first out of the ground and immediately attacks. 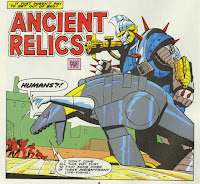 wo metal titans wrestle and hurl barbs at one another, Flint uses the opportunity to call in Wild Bill and a squadron of Dragonflies for an air strike. Wild Bill has a fun line here about Megatron having a bucket on his head but it doesn't save him as the rockets leave Megatron completely unscathed and he blasts Wild Bill's chopper out of the air. Things look bleak as we head for:

As this issue starts we find that Blades has made his own way out of the sewer, underwater. He leaps from the Thames just in time to save the crashing Wild Bill. There are some exciting action scenes here but not much story, so here's an excellent Geoff Senior splash page. 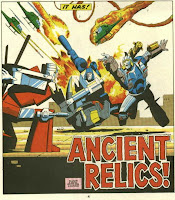 Flint does not see Blades' rescue of his friend so is wracked with guilt as the Dragonfly explodes. He steps up the battle, calling in Heavy Metal and his squad of Mauler tanks.

Megatron has the better of Grimlock before he is bombarded by their explosive shells just as Blades lands with Wild Bill safely inside his helicopter mode. Flint is shocked but spurred into action as Wild Bill tells him to call off the attack. Blades has told him that Megatron is virtually indestructible, and now he's mad!

So there you have it. Two issues of fairly frenetic action. The Action Force comic was comprised of very short UK originated stories and longer reprints of US GI-Joe material so this crossover was told in rather bite-sized chunks. It's exciting stuff, well-paced, and doesn't waste any time to get where it needs to go. I especially like the way Furman escalates the battle while showing off some Action Force hardware. It might not be super-realistic to have tanks so easily on hand in central London but it makes for a great moment and helps for Action Force to not be upstaged in their own comic by the Transformers, which would have been quite possible, especially given that Furman was writing it. 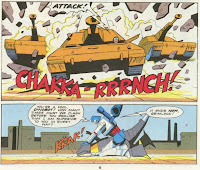 's not a whole lot of meat here. Action Force are given only cursory characterisation. Flint thinking Wild Bill is dead adds a little depth, but since he uses it as a reason to call in an armoured strike that was probably always going to be a good idea, it doesn't really go anywhere. Not to mention that Bill appears alive and well almost immediately. Megatron is still completely insane after blowing himself up (or did he?) and works fine as a berserker threat but there's no nuance, and it's a little too reminiscent of Galvatron's equally unhinged performance in the previous long arc. I do enjoy the impatience of Grimlock with puny humans and it's great that while being a pompous dictator in the US stories he still leaps straight into battle with Megatron without a second thought. He might be arrogant, misguided, and a liability as a leader, but he's still a hero.

Geoff Senior is at his best when drawing action and he really delivers here. His clean cut style gives the reader a really clear understanding of where characters are in relation to each other and exactly what they're doing. Call me shallow but he also draws excellent explosions. I enjoy battle scenes where humans get involved as more than just screaming bystanders because it adds a new dimension and a sense of scale to the comic. I might be in the minority here but I think if you remove the human elem

ent from Transformers completely then the Autobots and Decepticons might as well be humans themselves. Superheroes, probably, but their size and power would still largely be wasted. Michael Bay is guilty of many, many things, but I don't count pitting the US army against the Decepticons among them and we get a taste of that kind of action here, albeit with a rather more fantastical tone.

I'm really enjoying this storyline, and it's a shame it hasn't been reprinted anywhere. It's not the best Transformers story ever but it's clear, fast and exciting, and sometimes that's enough.
Posted by Bishbot at 11:46 AM

I enjoy this little crossover to absurd levels, far more than the rather thin story warrants. Perhaps it's the extra characterization for Grimlock, or the resolution of the Centurion plot, or maybe just Senior's awesome explosions, but these 31 pages really tickle me. I find it sad that they've not been reprinted and probably won't be reprinted in trade form.

(I'd love to get all the Marvel G.I. Joe / TF crossover material collected in one omnibus trade, and this story would fit right in.)

Action Force isn't the cleverest or deepest TF story around, but it sure is a heck load of fun. The fight scene is pure awesome, and drawn by Geoff no less (even if his work isn;t as good wihtout his own inks).

It's had one reprint but that was 23 years ago. When the weekly Action Force title ended Marvel UK launched Action Force Monthly, a smaller US sized book (similar to Dragon's Claws and Death's Head) that ran some reprints from the weekly title. "Ancient Relics" was run over the first six issues - I'm not sure whose idea it was to tell such a short and lightweight story over such a long time.

Action Force Monthly also went out in the US under the title "G.I. Joe European Missions" but I've no idea if Ancient Relics was a part of the marketing strategy. Still for some people the AFM/GIJEM issues may be easier to locate than the originals.