Bish's Review Space Above and Beyond Episode 11: The River Of Stars

"Iridanus: The River Of Stars - When I was kid, in the winter it'd get dark real early and on the way home from basketball practice I'd see Iridanus in the sky. It gave me comfort to see it return every year. To know some things never went away." - Wang

The River Of Stars was written by Marilyn Osborne and directed by Tucker Gates.

During a battle on

Christmas Eve, the 58th's ISSCV transport is disabled and left helpless - drifting towards Chig territory. While McQueen mounts a search mission the squadron discuss the meaning of the Christmas, give presents and argue about faith. When all hope seems lost, Wang receives a burst of morse code on the radio warning the 58th of an incoming comet. A further transmission gives the 58th the data they need to enter a stable orbit around the comet and hitch a ride away from enemy territory. The only snag is that Wang has to make a dangerous space walk in order to point the thruster in the right direction. McQueen, picking up the same transmission, sends his search team to rendervous with the comet and find the 58th alive and well.

The Good
That's right, Space: Above and Beyond did a Christmas episode. I bet you expected it to suck, didn't you? Well it didn't. While many TV shows crap out a seasonal episode that lacks anything other than empty sentiment (although that trend seems to be dying) Space manages a tense, interesting forty-five minutes that lays on the Christmas theme without losing track of the usual themes of the show.

In fact, I will go one further than this, and say that a Christmas episode is actually more appropriate for Space than many other TV shows. After all, who needs the spirit of Christmas more than a group of marines fighting a bitter war against an inhuman enemy in the cold of space? It is no surprise that many of the Wildcards are looking forward to one of the only breaks they are likely to get for a long time to come.

The show's determination to give the war with the Chigs some texture gets a major boost here as it is revealed (although never explicitly stated) that the aliens are behind the mysterious transmissions in broken morse code. A cynic might point out that this humanitarian gesture comes at a rather convenient time when it is highly unlikely that the Chigs have any idea of the significance of this particular date but Space has never really been above that kind of convenience in order to service a theme. The show tends to be more about broad sweeps of passion than nuts and bolts verisimilitude and comparing the Chig's act of mercy with the famous Christmas truce of January 1914, as the prologue to the episode does, is powerful stuff, if a little further from reality than a more modern show might attempt.

That aside, there's a lot more going on here. The most insistent arc of the episode is Wang's regaining of his faith after all the trauma he has been through since the war started. He cannot quite bring himself to mention the Silicates, but it is clearly what he means when he talks about "the things I've done." Dramatically I think this basically works but is a little disappointing in a couple of ways. I can understand how risking his life to save his friends would pull Wang out of the mire but in this arc the script drops the ball a little (for this atheist). There is an exellent scene early in the episode, where Damphouse and Wang explain Christmas to a genuinely clueless Hawkes:

"I kind of... took off... from the In Vitro educational facility before they taught us stuff like this, so all I know about Christmas is there was one day out of the year in Philadelphia that everything was closed and it was a headache... and it was lonelier than usual."

What really works is that the rest of the 58th gives the religious side, son of God, magical stars, etc and Wang gives a more grounded, scientific version, but they aren't competing with one another. They take the topic back and forth and give both sides without arguing or worrying about who says 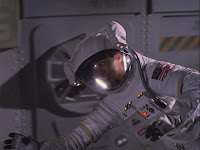 what. At this moment I felt that the show was being very even-handed, and explaining that Christmas has different meanings for different people, but in fact, the script goes on to equate Wang's beliefs with a loss of faith in himself, which I feel is a misstep, although a minor one, as the episode really doesn't dwell too much on the Christian side of Christmas.

More successful is the passing around of West's picture of Kylen as a more general symbol of faith and hope for the 58th. West gives it to Wang before his space walk and Wang eventually gives it to McQueen as a symbol of his faith that the 58th would be found alive. West's insistence on finding Kylen was always a little awkward in this show about broader themes of life and death but this is a nice evolution of the arc. Yes, West is still looking for her, but he has friends now, and comrades and they have their own symbols, rituals and belief in each other.

Vansen plays the role of the mum of the group, secretly packing Christmas presents into the transport and giving them out at a time of dire need. Kristen Cloke plays this scene beautifully, as Vansen is all too aware that this is detracting from her usual air of badassery but cannot help but be excited so she tries to rush the moment as much as possible in quite an adorable way.

McQueen and Ross on the Saratoga get a few great scenes. Most memorable is the silent shot from behind McQueen as he watches the transports return from the battle, silently counting each one back

with the fingers on one hand. A look of heartache and a clenched fist are all that's needed for James Morrison to convey the emotion in the moment. Once again Ross and McQueen spar over how big a search to conduct and whether the 58th are likely to be alive but Ross barely argues, even going as far as to play "I'll Be Home For Christmas" on his guitar over the radio in the hopes that the 58th will hear, but not before assuring them that he isn't drunk. McQueen's similar gesture is to play a recording of the Apollo 8 astronauts reading from the book of Genesis from when they orbited Earth for the first time. Perfectly in keeping with McQueen's character, his deep sense of history, and the themes of the episode. This is even better as it is contrasted with a funny moment earlier in the episode where the radio picks up an old transmission from Earth of the Batman theme and the Wildcards briefly wonder if McQueen has lost his mind.

Hawke, being the token outsider, gets the traditional "what is the meaning of Christmas?" arc. There's nothing original here but the sentiment is earned and sincere when he accidently gives Vansen a Christmas present she doesn't want, and then learns that is perfectly ok, because it's the thought that counts. It could have been cheesy but it's remarkable how Space avoids the cliches in moments like that merely because you believe that these gestures really do mean this much to the characters.

The Bad
For this episode, other than my slight criticisms of Wang's arc, any bad would really be reaching. I really think it's that good.

(Ok, fine - maybe the comet is moving improbably quickly. Either that or the boundaries between Chig and Human territory are REALLY precise)

Future History
I didn't catch any future history this episode but we did get a bumper helping of:

Past History
As mentioned, the episode opens with a prologue explaining the Christmas truce of 1914, in the First World War. It is narrated by Wang and features photographs and newsreel footage. It manages to be poetic, educational, and perfectly in keeping with the concerns of 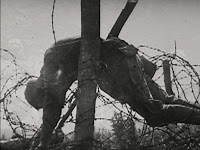 a science fiction show about people born in test tubes who fight aliens in interstellar space.

There is also a great deal of detail about the history of Christmas which is woven neatly into the narrative and, of course, McQueen's message from Apollo 8.

Wang's present from Wang is a copy of Romeo and Juliet and the following passage is read out:

And when I shall die,
Take him and cut him out in little stars
And he will make the face of heaven so fine
That all the world will be in love with night
And pay no worship to the garish sun
- Juliet

In a nice touch, the title of the book is never shown or read aloud, leaving the audience who know the speech feeling clever and the others intrigued enough to look it up.

A good forty-five minutes of Space: Above and Beyond and just a great episode of television in general. An exception to the rule that Christmas themed episodes are disposable and only work in the holidays. (See also Futurama, for equally triumphant yuletide stories, although in a completely different way).