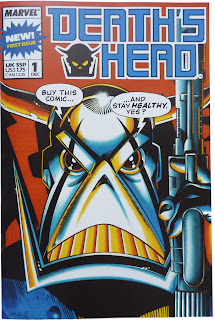 The cover is by Bryan Hitch, and it’s memorable: an extreme close-up of the mechanoid’s head, his metallic skin cold and flawless as he stares at the reader, gun raised close to his face . Underlighting adds to the sinister appearance, and the shadows cast from his tusks fall perfectly across each of his unblinking eyes. The dialogue softens the frightening visage with some to-the-audience humour, “Buy this comic … and stay healthy, yes?” It’s one of the best covers in the series.

The issue itself is made up of three 6-page stories – all occurring before Death’s Head’s encounter with Dragon’s Claws – and a framing story that continues after he got blown up and buried. In the same style as ‘High Noon Tex’, the captions are Death’s Head’s own narrative.

The first story is set on Sttudduj, a medieval-style world of simian-humanoids. Death’s Head is infiltrating a royal palace, hired by oppressed rebels to assassinate their king. He silently dispatches two guards (the first and only time he uses his arm attachment to shoot a blade) but gets suspicious at the lack of resistance. His verbal quirk makes for an amusing conversation with himself: “Would a king … leave himself unprotected like this, eh?” “No, yes?”.

Bursting into the throne room, cloak rakishly draped across his front, Death’s Head is confronted by the king and a roomful of palace guards – the same guards who, pretending to be rebels, had hired him (the king’s plan to snare potential assassins).

Disarmed, Death’s Head pulls his own trick: his shottblaster attachment was concealed under his cloak – the removed hand was poking out of the cloak only for show. Guards mown down, the defenceless king attempts to cancel the contract. Death’s Head replies with his mace, as the narrative gives us, “Rule One: Always honour a contract, but never trust a client!”

In the ‘real world’ of 8162, two men in a dim laboratory inspect an off-panel Death’s Head. A small man in a white coat, Spratt, has repaired him, but the mechanoid refuses to stir. As if he has a mind of his own…

Story two has Death’s Head on Furik, a world of Prohibition-era characters, right down to the Tommy guns, pinstripe suits and cod-gangster accents. He starts on the defensive, being chased into a nearby barber shop by a half-dozen hoods. The hoods follow and, none too bright, ignore the only customer with horns until he leaps from his chair, decapitates one of them with an axe, and seizes a gun to annihilate the rest (Death’s Head does all this while still wearing the curly blond wig that was his ‘disguise’).

Continuing with his contract on a boss named Dutch Malone, he invades a speakeasy and crashes into an upstairs room. Inside he finds a woman reading to a child and turns to leave with apologies. He is blasted off the balcony by the ‘child’, who reveals himself to be the diminutive Malone – aka ‘Babyface’ – teddy bear replaced with a huge blaster. Recovering, Death’s Head snatches up a bottle and lobs it at Malone’s head, bringing him crashing to the ground. “Rule Two: Make no concessions for age, size or gender.”

Back in 8162, the larger man, Sabre, is losing patience. We learn that ‘The Chain Gang’ want to use Death’s Head to hunt down one of their former members. Frustrated, Sabre punches the lifeless metal face. Two red pinpricks of light appear in the eyes…

Third story: the robot world of Scarvix. Death’s Head is sitting in his office (which may be the same one he blew up in ‘High Noon Tex’) and brooding about a lack of business. His only work has been to recover the memory circuits of a robot butler who then forgot he had hired him. “He’ll remember where I shoved his memory circuits forever, yes?”

He then sees a massive red robot – a bruiser named Backbreaker – tearing his way down the high street. Though he shrugs off the idea of playing the hero, an idea occurs. He confronts Backbreaker, claiming to have been hired by one of his victims, and shoots a little pellet into his forehead.

Taking the fight into the street – where there are plenty of onlookers – he pounds his opponent with a number of impressive attacks before the original acid pellet takes effect and eats away Backbreaker’s brain. He coolly gives his address to the cheering crowds, and is next seen dealing with long queues to his office. “Rule Three: Never kill for free, but it pays to advertise.”

Finishing in the real world, Sabre aims another kick, and is promptly clobbered as Death’s Head comes alive. He thanks Spratt for the repair job and, revealing his brand new uniform, declares himself, “open for business, yes?”

It’s a storming introduction. The short-story format really works here, giving us plenty of Death’s Head, in a variety of situations, without a main antagonist intruding on our attention. Using Death’s Head as the narrator – the same manner as the Punisher’s War Journal – is a great touch, giving some efficient exposition as well as showing off his dry humour. I’m really surprised this device was only ever used once again (briefly in the next issue, then dropped), as it seems a perfect fit for the character.

Added to this, in the opening pages for each story, we’re treated to some intriguing hints about Death’s Head origins: he killed his programmer ‘for fun’, a rare exception to his profit-only rule; he was created to be a ‘rich man’s deadly plaything’ but rebelled to rob and murder his owner. Most of this gets contradicted by his later origin story, but reading without that foresight, they seem like good foundations.

At an early stage in his career, Bryan Hitch’s artwork is good, but a little unrefined. Though he does a great job on the different characters and scenes, sometimes the action feels sluggish and framing choices a bit standard. The rendering of the characters, however, is splendid and the final, full-page of Death’s Head’s new uniform is outstanding. The tattered green body armour has been replaced with dark blue samurai plates. The whole effect is leaner; while the original design suggested a robotic version of clothes, this seems like actual armour he is wearing over a metallic body (more fitting, I suppose, for his adventures among humans). Spratt even got rid of the dent in his cranium.

Three stories mean Hitch gets to deliver three splash pages, which are done brilliantly. There is a stealthy menace as Death’s Head leaps through the rafters like some vast predatory bird (sorry, the Furmanism was screaming at me), but my favourite is the image of him brooding in his office (right down to the ‘DH’ coffee mug). For both these pages – and for distinguishing the flashback ‘dream’ stories against the sterile and moody framing story – credit should include inker Mark Farmer and colourist Nick Abadzis.

Each of these stories are riffs on familiar genres: fantasy, gangster and Western (there are no cowboys in the third one, but it has a ‘sheriff-cleaning-up-the-town’ feel). The first one is my favourite, having a couple of nice twists and requiring Death’s Head to use stealth and intellect – something he doesn’t get to do enough. The second story is cartoonish, mostly played for laughs (especially the wig!) and the third is a solid tale.

It’s a shame this ‘short-story’ style was never repeated in the series. I think it shows Death’s Head at his best: making him a devious and violent player in a random environment (the alien worlds are also a fun stretch of Furman’s imagination). As there’s little development for his amoral character, the narrative counts for a lot more and (looking ahead) a 22-page story can sag whereas these 6-page episodes stay brisk.

What I liked about the framing story is that it puts these tales in context: Death’s Head is going over his past cases to reboot himself, each one confirming a ‘rule’ of his profession. It has the same feel as the Dinobot story “Victory”, where Furman jumped between reality and mechanoid dreams to great effect.

I wasn’t so happy about the motives of his rescuers. We find out in the next issue that ‘The Chain Gang’ are the inhabitants of a ruined prison, so even if you accept they have the wherewithal to repair and improve an advanced mechanoid, Sabre’s talk about the ‘manpower and resources’ from Spratt’s ‘department’ sounds too corporate for a mob of convicts.

Perhaps Furman hadn’t properly settled on this part of the story. Indeed, the idea of an unscrupulous corporation repairing Death’s Head (in the manner of Robocop) has some dramatic potential, especially after his flashback admission that he kills anyone who tries to own him. The mechanoid’s friendly acknowledgment that he owes Spratt a debt undercuts any idea that things might turn nasty, which would have made a nice cliffhanger.

Next week, the new-look Death’s Head repays his new friends by taking on old enemies. Round 2 with Dragon’s Claws in ‘Contractual Obligations’!

Will you be doing a "Secrets of the Almanac REVEALED" for the second book?

Chuffer, surprised you liked this issue so much. I thought the short story format was a bit odd for a first issue. This almost felt like an issue zero to me - establishing the character but without really starting in on the plot.

I suspect this was originally written to be a backup perhaps in the Dragons claws book and they decided against it. Alternatively, they wanted new readers to know who deaths head was, and unless you had read transformers you probably wouldn't.

Again I'm slightly annoyed Marvel have pretty much forgotten about THIS incarnation of Deaths head. With all the retconning they are doing at the moment, maybe the time is right for a revisit to 8162? yes?

Hey chigger any thoughts on SDCC announcement of transformers 81 by Mr Furman and Mr Wildman?

Jimtron, this short story format actually seemed more in-keeping with the style of UK comics at the time. Even US-format titles, like Action Force Monthly, usually had three stories per issue. I agree that the plot doesn't really get started, but that could be said of the whole series.

Anonymous 2, this version of Death's Head reappeared in S.W.O.R.D. (and fought the Hulk in a Panini publication), so he's coming back on the radar. Apparently there is going to be a Death's Head panel (with Furman and Senior) at Auto Assembly in August (if anyone's attending, I'd love to know what their thoughts are for the character).

According to wiki (though by no means the ultimate infallible expert on any subject) the version of Death's Head seen during World War Hulk was actually Death's Head III, though Furman has confirmed in interviews this is the prototype of what will eventually become Death's Head 1 (the one featured in this article).

But DH3 doesn't look or act like DH1 (yet) so for now I'm still treating it as a totally different character.

I have this comic, and was wondering what was the price on it was, and it's in really good shape