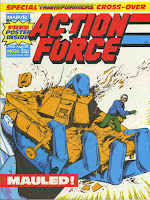 y Simon Furman finished off the story he started and wrote parts 4 and 5. Geoff Senior supplied the pencils, Dave Harwood the inks, Steve White the colours, Annie Halfacree the letters and Richard Starkings was the editor.

The cover for Part 4 is by Jeff Anderson and shows Megatron's hand crushing a Mauler tank while the driver escapes. Personally I don't think this is an especially great piece of art as there is no background detail and the driver is posed rather oddly. However, if a reader were primarily an Action Force, rather than Transformers fan, this cover with a familiar and powerful tank being crushed by a gigantic metal hand from off-panel might be very dramatic indeed.

Part 5, however, also by Jeff Anderson, is just poor. A lack of detail around Blades' eyes just makes him look lifeless and the three Action Force characters ar 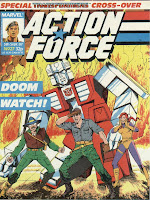 e posed and drawn very sloppily. They don't appear to have any spatial relationship with one another. And what does "Doom watch!" even mean?

Megatron, still somewhat mentally unstable, is smashing Action Force tanks as though they are toys while Flint looks on in horror. Scarlett pulls him away while they discuss how hopeless the fight seems to be. Grimlock is out for the count, Blades isn't powerful enough and Centurion doesn't seem to be doing anything.

We duck into Centurion's head as he thinks back to his last battle with Megatron, which ended in his near-destruction. He is powerless, and feeling like the "ancient relic" that Wheeljack accused him of being.

Grimlock regains consciousness and launches himself back into the attack, reconsidering his opinion on humans. He has never had any regard for them in the past but Action Force's heroic fight agains 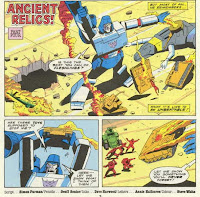 t impossible odds has saved his life and Grimlock pays his debts! Managing to relieve Megatron of his fusion cannon he lures the Decepticon towards some enormous gas silos...

The perspective shifts to Wild Bill, riding in Blades' cockpit with Flint. He remembers a mission from his past, having to leave a man behind in South East Asia. The memories are flooding back because the only logical plan from his position is an air strike on the gas tanks. Though stricken with horror he says nothing as Flint calls in the Sky Strikers...

As Grimlock and Megatron continue to struggle, Wild Bill gets his voice back and yells his concerns to Flint. Centurion looks on with interest. Wild Bill wants to tell Grimlock to get out of the way but Flint points out that Megatron will follow him out of the firing line.

Centurion comes to Blades with a suggestion. As Grimlock and Megatron duel Blades drops Centurion in to help Grimlock. The helicopter Autobot drags Grimlock to safety while Centurion keeps Megatron busy. As the Action Force planes release their payloads Centurion grins, pleased that he was still able to contribute.

The gas goes up in a tremendous fireball and the two burning, unrecognisable figures plunge into the Thames. Blades explains to Flint why Centurion did what he did and Flint says that Centurion was more "old soldier" than "ancient relic" and salutes his memory. 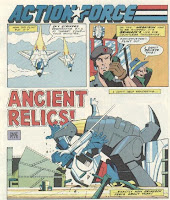 The story ends with more exciting action and a farewell (at least for now). The incoming airstrike is a well worn but often effective plot device and while Wild Bill's flashbacks feel a little tacked on I do appreciate the effort to give him a bit of characterisation as well as the reference to Vietnam.

Unfortunately the really emotional part of this story is rather less effective than it should have been because Furman makes the bizarre choice to not show the human intelligence behind Centurion. Anyone who didn't know his history would assume he was just an Autobot, or some other autonomous robot. Professor Morris isn't mentioned at all. If, after Wheeljack's repairs, Centurion is supposed to be autonomous then it certainly isn't made clear, and that seems unlikely, because then he would just be a new character, not Grimlock's old friend.

If poor old Professor Morris has now lost his only connection to the outside world then that is worthy of an emotional pay-off but we don't see anything of the sort. It's probably not strictly a continuity error because there is no way that Furman would forget the history of this character but it is a very strange approach to continuity.

That aside, I do like the story. I like the London setting and the escalating waves of Action Force reinforcements. It's big, loud and over-the-top but at least it shows that humans can do more than just be stomped underfoot. Of course, we could have seen that even better if Professor Morris had been used and I suspect his interractions with Action Force, and their reaction to Triple-I might have been very interesting indeed, but, admittedly, a completely different story from this exciting action piece. 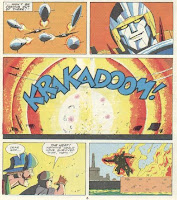 Geoff Senior continues to deliver on the artwork. When doesn't he? The explosion on the second to last page is particularly effective and accompanied by Furman's favourite large explosion sound-effect: "KRAKADOOM!" On a more emotional level the joy on Centurion's face as he realises that he has made a difference is dead on, and a really good argument for the redesign as he now has a face with which to express joy.

I enjoyed Ancient Relics immensely. It was a fast, exciting action storyline that knew how to escalate the situation with each passing issue. I wouldn't want every Transformers story to follow this exact model, but I would certainly have liked to have seen more of Action Force (or, as I can't help but think of them - GI-Joe) than we ultimately did.

Check back next week for a return to the actual Transformers book and a review of Kup's Story.
Posted by Bishbot at 9:57 AM

You know, as much as I enjoyed this story, and you know I enjoyed it, I can't help but feel that Furman missed a trick with the Professor Morris / Centurion thing.

This story doesn't acknowledge at all that Centurion was the avatar of a human, even as it moves him off the chessboard. That's bad storytelling in and of itself. But, with Morris being a fellow human, the Action Force angle ties thematically into his own history and backstory.

I think a bit of exposition earlier on about who and what Morris was, combined with a page of him waking up from the control chair and turning himself in to the authorities no doubt waiting outside of his bunker, would have made this a much stronger tale. I don't normally like to hold up "I'd have done it differently" as a flaw but to just not acknowledge what made Centurion unique in his swan song is an objective flaw. It's not so much a "could have been better" as it is a "really should have been better."

I agree that the omission of Professor Morris was a very strange decision. It seems ‘Ancient Relics’ was about Centurion’s survivor’s guilt (at being repaired ahead of the queue) and redemption. But that doesn’t really fit into Morris’ story arc and, with the exception of his history with Megatron, maybe one of the long-term deactivated Autobots would have been a better choice? It would have better suited Flint’s final salute to an ‘old soldier’.

Part #4 was my favourite of this series – I loved the ‘one page per character’ device, their thoughts matching the action with the “he remembers” motif. I love the idea that trashing Action Force was just the tonic Megatron needed after his previous setbacks.

Another point often overlooked is that Centurion had no power of speech before this story. Suddenly he's become an interactive character.

Rereading the story the main thing that struck me the most is that "veteran"/"ancient relic" aren't really the terms one would associate with Centurion. He's not an old soldier with his glory days seemingly long behind him, he's a human built machine operated by a human scientist who drifted into the conflict. It's almost as though he was distorted to fit the title them of "ancient relics".

The other thing I felt was that by and large Action Force's role in most of the story is limited to just bringing more hardware to the battle. Flint and Wild Bill get a little exposition but otherwise it's not really a good taste of what the Action Force comic was about which you'd expect from a crossover. (And it couldn't have helped that another third of each issue was taken up with a rather old Master of Kung Fu reprint.)

doom watch on the cover of part six may be a reference to a TV series in the UK of the same name. which was a Sci fi that ran in the early 70's. maybe...