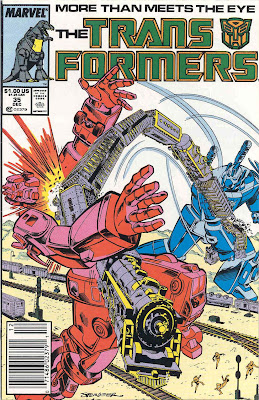 Child's Play is the 35th issue of the G1 Marvel US ongoing Transformers series. The creative lineup is largely unchanged from the previous issue - at least, the previous issue as it was intended to be read, issue #32. Budiansky continues to scrip, with Perlin pencils, Akin & Garvey inks and Yomtov colors. Only the lettering changes, with Jack Morelli joining the crew. The cover is a Frank Springer.

The cover is rather striking, pun intended, in an odd sort of way. Bruticus uses a freight train as a flail and smashes Defensor in the face. The train is mangled at the point where he grabbed it, with coal spewing everywhere. Four children look on in wonder and horror, even as they flee the scene. What makes it somewhat controversial is that the principals are block colored, with Bruticus in blue and Defensor in red. It's possible that this cover was rushed, necessitating this choice, but it actually works pretty well. The stark colors make for a dramatic contrast.

The issue itself begins with a child crashing dramatically to the ground, a toy gun clutched in his hand, while another kid atop a freight car points a weapon at him and yells POW! Nice lettering there, Morelli. Three boys, Sammy, Jed and Allan are playing some sort of game, though Jed's little sister Robin (and her teddy bear Daisy) aren't that keen. An argument about why she had to come (along with who's losing the game and who's maybe a little fat) is broken up when some emergency vehicles drive by. They hide from what they think are the police, but what are in fact the Protectobots.

The Protectobots are taking no chances with Blaster. He's clamped with a mode lock that prevents him from doing anything and keeps him stuck in cassette mode and attached to Groove, who is himself inside of First Aid. Grimlock is satisfied - he wants Blaster punished. Besides, the Ark is finally repaired, and Blaster's retrieval is holding up the launch. Wheeljack, though, is starting to have serious misgivings about Grimlock's leadership style. 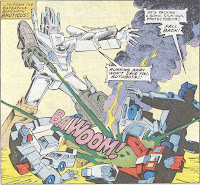 Blades, scouting ahead for his comrades, sees some tank treads ahead that match Brawl's vehicle mode. Blaster is hidden away inside a pipe so that they can engage, though Jed sees him d rive by. Not that his friends believe him, though. With the prisoner safely out of harm's way, the Protectobots engage the Combaticons. The kids hear the sound of battle even as Sammy locates Blaster. Blaster encourages them to evacuate the area, realizing how easy it would be for the battle to spill over. Soon five on five combat evolves into one-on-one as the combatants combine. Bask in the bountiful bombast of Bob Budiansky: behold, "the Barbarous Behemoth Bruticus!"

Grimlock, meanwhile, is getting impatient. The mode lock, which is trackable up to a range of 50,000 miles, has been stationary for some time, so Grimlock prepares the Ark for launch. The kids track the towering titans tangle with trepidation. (Sorry!) Blaster suggests that removing the mode lock on him will allow him to protect them. Allan goes ahead and does it, prompting Blaster to quickly Transform. When he sees the fear in their eyes, he kneels before them and swears to protect them.

Defensor, meanwhile, is running low on fuel as his force field fades against the awesome artillery of his adversary. (Sorry!) Blaster is soon forced to make good on his oath by knocking aside a falling electrical tower to safeguard his charges. Bruticus finishes off Defensor with the aforementioned train, then turns on Blaster. Without any power in his weapon (see issue #32), his options are limited. He tries to bluff Bruticus, saying that he was Defensor's prisoner. Bruticus demands he shoot one of the humans. Sammy steps forward, declaring that he's not afraid of the robot, prompting Blaster to shoot him. Down he goes, and his friends start to panic and cry. Bruticus leans forward to examine Blaster's handiwork, allowing the Autobot to fry him with the electrical dower downed earlier.

Sammy gets up. His acting has fooled the 'Con and allowed Blaster to save them all. Blaster helps the Protectobots recover, and Blaster promises not to give them any trouble provided the humans are shown to safety first. Hot Spot, though, realizes that Blaster has been doing a better job of protecting than he has and allows Blaster to go free. The kids spy Blast Off's unconscious shuttle form and express a desire to actually go into space, rather than just play at it. Thanks to the mode lock, they actually can do so. They fly off, feeling free fall and watching the world with wonder. (Sorry!) Unfortunately for them, there is another ship shooting at them. It's the Ark, and they longingly wish to go home now as the book ends. To Be Continued!!, it assures us.

Was it worth the wait of twelve weeks? (Sorry!) Eh, probably not. Even the month it took me to review this, following the previous chapter (thanks to Headmasters and, of course, Man of Iron) seemed pretty long. Timing aside, though, it's a decent story. There's nothing spectacular about it, really, but it hits the necessary beats. Blaster continues to be one of the more interesting Transformers. It seems that he's becoming a sort of defacto alternative to Grimlock's leadership. The Throttlebots, the Protectobots, and soon Wheeljack, all seem to be looking to him for guidance in the face of Grimlock's ineptitude. The kids, on the other hand, fail to compel. Sometimes Bob manages to craft truly interesting humans to view the conflict thorough, but this quartet fails to resonate, at least with me. We'll actually see quite a lot of them, comparatively.

Child's Play is collected as the kick-off chapter of IDW's Classic Transformers Volume 3. (Sorry!  But might still be worth your hard-earned dollars, better stories are to come.) Sadly, even here, it's split up from #32. Next week, we're promised that we "Hitch a ride through the solar system with the the Spacehikers! Plus Sky-Lynx!" Looks like we're back to introducing new characters. Joy!
Posted by Jimtron at 9:17 AM

I remember, when reading this issue way back when, how the fact that they actually fixed the Ark and had it spaceborne seemed to come pretty much out of nowhere. Perhaps I'd been conditioned too heavily by the cartoon, where the Autobot ship (never called the Ark in the cartoon) not only never moved, but had those large rock growths on the interior, making it pretty clear that the thing would never fly again.

I think your affinity for alliteration betrayed you. ;)

I remember this issue well. Following on from the Scraplets and Used Autobots, I really enjoyed seeing these combiners in comic action for the first time (for me). Loved me some combiners.

I remember this issue vividly since it brought Bruticus and Defensor into the spotlight other than their introduction in #24. They were rarely featured in TF media back then, even in the cartoon. Menasor and Superion got a lot more screen time.

I also remember this issue in that it was the last lssue that I liked consistently. After this issue, it was hit and miss; the writing seemed uninspired and Budiansky seemed not to care anymore about writing good Transformer stories. The fact that artist Perlin left the book around this time was either a coincidence or was a factor in the decline in storytelling quality.

Jim, The robots being red and blue are a throw-back to the 'Rock Em, Sock Em, Robots' toy. Just an FYI. ;-)