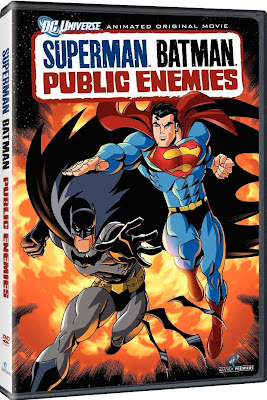 Today is Bish's birthday! Many happy returns to my intrepid co-blogger. That being the case, he probably won't have time to review Target: 2006 part 4 today. I figured I'd look through my recent purchases for a good review candidate. Lo and behold, there was one: Superman/Batman: Public Enemies (Two-Disc Special Edition)

In the interest of full disclosure, I have not read the comics on which this story is based. A friend of mine ran through some of the differences, but ultimately I'm just not knowledgeable enough to point out the differences in a coherent way. That said, any time an adaptation from one medium to another takes place, especially a serial medium to a stand-alone medium, changes have to be made. In some ways, that lets me more readily judge this DVD on its own merits. There will be spoilers ahead.

Superman/Batman: Public Enemies tells the story of Lex Luthor's presidency, and the clash that it precipitates. Luthor comes into office as a third party candidate, on the back of a massive economic collapse. These events are briefly summarized in a pre-opening credit montage, complete with a lampooning of the former supervillian by a Daily Show parody and an interview of Luthor conducted by a Larry King knock-off. After his victory, Luthor makes it clear that superheroes are subject to the same laws as everyone else. He's even taken the step of bringing several of them into the service of the government. It's a very slick way to introduce the story. The intersection of the political process and the media, juxtaposed with comic book characters, grounds the story nicely.

Events quickly spins out of control. A huge Kryptonite meteor is going to smash into Earth, wiping out most of civilization. Luthor thinks that he can handle it, but uses it as an opportunity to frame Superman anyway. A meeting, ostensibly to discuss working together, turns into a battle between Superman and Secret Service agent Metallo. Batman shows up to help, but eventually they're forced to flee. A mysterious figure, though, murders Metallo. The Metallo reveal was one of the best moments of the video, and the fight that followed was terrific.

Luthor pins the murder of Metallo, complete with video footage, on the Man of Steel and offers a one billion dollar reward for Superman's capture. We get some truly massive fights as a result of this. One highlight was Batman facing off against Mister Freeze, Captain Cold, Icicle and Killer Frost. Another was the reveal that many of the villains were acting under Grodd's control.

The fight is interrupted by the arrival of Luthor's goon squad of heroes. Power Girl reveals her doubts about Luthor, and Batman tricks Major Force into revealing that he was behind Metallo's death, turning the others against him. It's not quite as satisfying as the massive supervillain brawl, but it's still decent action. Batman proves again his worth, even when teamed with probably the world's most powerful superhero.

From here, though, the story gets weaker. Luthor's plan to destroy the meteor (remember that?) fails. Superman and Batman try to get at government data and run into Captain Marvel and Hawkman. We cut away from the battle with the antagonistic heroes winning. Waller finds out that Luthor has been injecting himself a Venom/Kryptonite mixture and it's driving him a little mad. He's willing to let the Earth burn and rebuild what's left. In the middle of his ranting, he unexpectedly kisses her, a nicely bizarre moment. Hawkman and Captain Marvel then show up at Luthor's anti-meteor base, but it turns out that they're actually Superman and Batman. Luthor tries to erase all government data on the impending calamity, but Waller hands them a jump drive filled with data.

While Superman and Batman go off to save the world, Waller attempts to arrest Luthor. Luthor, though, is ready for this and has prepared one of his probably-not-patented supervillain suits. He's going to prevent the heroes from saving the world. It's a shame that the story went in this direction. Luthor was working so well as the face of the government. While I appreciate where they were going with him injecting himself with Venom, from one of Batman's villains, and Kryptonite, Superman's Achilles heal, it seems like a massive step down from just being President. Him fighting to destroy the world, because chemicals have driven him crazy, just seem out of character for this monomaniacal titan. JLU had the same problem - him as President was much more menacing than him as a partner to Brainiac or, worse, a Brainiac junkie.

With the data in hand, Superman and Batman fly to Japan to meet Hiro, the Toyman. It's a WTF moment, to be sure; Hiro had been alluded to a grand total of twice in this story, and once was pretty late in the game while the other was extremely subtle. He's built a rocket to save the Earth based on an existing design from when he was seven, a massive half-Superman half-Batman behemoth. Luthor pursues them and smashes up the controls, forcing Batman to pilot it manually. While Batman flies into space and saves the world, Superman battles Luthor around the globe, eventually downing him in (where else?) Metropolis. As Luthor is carted away, much too abruptly really, there is much rejoicing in the street. The giant rocket is silly, but it's at least appropriately silly and the writers attempt to justify it by having Hiro bashfully state that he had a bad case of hero-worship when he designed it.

All told, it's an ambitious story that doesn't quite know what to do with itself. The idea of Luthor fighting to destroy the world seems so out of character that they needed to justify it by having him be out of his mind. A huge Superman / power-suit Luthor fight is just about the most pedestrian way this story could possibly end. The animation was beautiful, though I didn't care for Power Girl's design. She just seemed plastic somehow, not very real. The fight scenes, especially the Metallo fight and the Superman / Luthor fight, were amazing. The voice acting was great, and they got a bunch of the DCAU actors to reprise their roles. It's a good story, only suffering from not living up to its own potential. At $17 or so on Amazon, it's mildly recommended.
Posted by Jimtron at 9:37 AM

Probably because of gygantic boobs.

I've seen the first part of it at the Armageddon Expo on October 17th but I had to leave because I had a bad migraine that day.

But that was a very good review though I'm not sure if I'll watch the rest of it, I'm not particularly a fan of DC