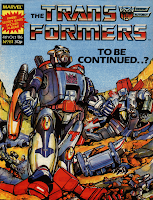 The cover was by Will Simpson and although I slammed his art last issue, I’ve got to say that I am a fan of this piece. Galvatron stands in triumph as the bodies of defeated Autobots lay all around. His foot is on Ironhide’s head. The only conscious Autobot is Jetfire and he is slumped in horrified capitulation as Galvatron roars a primal cry of triumph. Simpson’s style works very well for Galvatron here, because his tendency to make the Transformers look less human than usual makes the Decepticon look like an all-powerful monster, complete with demonically glowing mouth and eyes. The Autobots are not the focus of the piece and can’t be seen very well, so look good enough for the purpose. A very dramatic and intriguing cover, even without the rather unncecessary “TO BE CONTINUED?” caption.

This issue is told in flashback. We first see Ironhide on his knees, digging with his hands, but we do not know why. He is thinking about defeat and indeed, the very next image, and the focal point of the first page, is Ironhide’s unconscious form with Galvatron’s foot on his head, as the cover suggested.

Ironhide keeps digging and remembers a discussion in the Ark. Jetfire and Smokescreen are determined to get Jazz back from Galvatron as quickly as possible (he was captured last issue). Hound warns them about how powerful Galvatron is and urges them not to attempt anything without Ultra Magnus’ help, even though Jetfire doesn’t trust him (a bit hypocritical from an Autobot who started life as a Decepticon drone warrior, perhaps?).

It turns out that Ultra Magnus refuses to help anyway. This decision clearly pains him greatly, but he is seriously on the clock here, and as far as he is concerned finding Optimus Prime and the Creation Matrix takes priority over one captured Autobot.

The Autobots attack anyway. “We did need Magnus” remembers Ironhide as he recalls a battle that was more of a slaughter. Scourge and Cyclonus demonstrate their extraordinary expertise for a while as the Autobots weaken before finally going down, apparently. Jetfire gives the order to go after Galvatron.

Galvatron laughs at them. Arrogantly he points out that the Constructicons do nothing to protect him, because it would be unnecessary, and, even worse, that Scourge and Cyclonus are actually fine, their defeat merely a ruse to break the spirits of the Autobots. 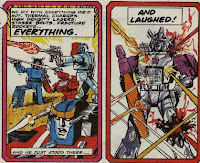 vites the Autobots to show what they can do and they oblige. Ironhide’s narration reaches an anguished pitch here as he recalls how Galvatron just stood there, took it, and LAUGHED as lasers and projectiles bounced off his armour. With the Autobots frozen from shock and energy-drain Galvatron makes short work of them with his bare hands. He tells Ironhide that they are "not even worth killing", and leaves them scattered around like burned out toaster ovens.

Ironhide has concluded, after coming around, that the Autobots are useless in a situation like this without someone to take charge, which is why he has been digging.

The final page of the issue shows us Ironhide’s target. He has taken the momentous decision to dig Megatron out from under the rock pile that Galvatron buried him in. Clearly desperate times have called for very desperate measures indeed.

And, as a final intriguing coda, we cut back to the Ark. Grapple walks past, unnoticing, as a red light flashes on a console and a blue coloured fist smashes its way out of some kind of stasis pod.

I love this issue. Ironhide is not usually the sort to get a chance at a tortured soliloquy but we really feel for what the character has been through. Clearly his ultimate decision does not come easily but we can really feel his and understand desperation here, even if it is impossible to shake the "this cannot possibly end well" feeling.

I am not sure I like this version of Jetfire very much. He appears very hot headed but his anguish at Jazz’s ordeal is raw and very real so his rashness is understandable.

It is perhaps a slight contrivance that Ultra Magnus is a bot of few words when it comes to his mission and while the other Autobots know why his is on Earth, he does not waste time in diplomacy with them, leaving them angry and resentful. Still, this creates some excellent soul-searching in the few panels we get to see Magnus this issue.

By the end of the issue the gloves are really off; with Optimus Prime gone and the Autobots turning to their greatest enemy for aid. This is one of the finest cliff-hanger endings that Marvel UK managed to produce.

If the script has a flaw it’s the blatant authorial device of having the villain defeat the heroes but not dismantle them because they are “not even worth killing.” It could be convincingly argued that Galvatron is trying hard not to disrupt the timeline - that is, after all, why he buried rather than destroyed Megatron - but no hint of it is given within this particular issue. It would not have been difficult, we the readers have access to Galvatron’s thoughts if necessary, so although it makes sense that he would not have wanted to disclose this potential weakness to the Autobots reminding the audience might have stopped the story from being quite so convenient.

Anderson’s art is always solid and this issue is no exception. The detail on Ir 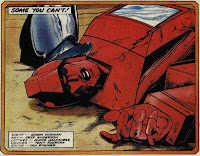 onhide’s unconscious form on the first page is exquisite. When the light in a Transformer’s eyes goes off it is always a very bad thing. This is probably blatant fanboyish projection but it seems to me that a good artist, like Anderson, can reduce a Transformer to a lifeless metal husk just by colouring those two hexagons in black. Ironhide no longer looks like a being that can move under his own power, or indeed anything alive. The rest of this issue is certainly up to this standard and a marked improvement over the last one.

The best issue of the saga so far and with plot twists that promise much bigger things to come.  IDW's trade of  Transformers: Target: 2006

is available from Amazon.com.
Posted by Bishbot at 3:08 PM