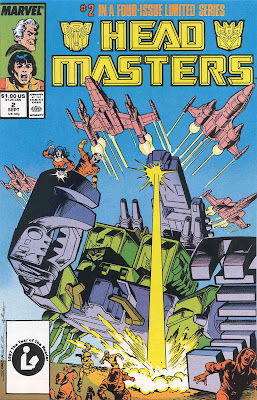 Broken Glass! is the second issue in the four issue limited series, Headmasters. The creative lineup is largely unchanged. Bob Budiansky continues to write the script (and, indeed, the story treatment for the gimmick that would inform both packaging and The Rebirth.) Frank Springer stays on as artist, for both the interior and the cover. Nel Yomtov, as always, colors the book, and inks are by Garvey and Akin. Pat Brosseau picks up lettering duties.

The cover is just about all you could want from an 80's cover. Scorponok dominates the cover, crawling along like some kind of movie monster. He has a brace of Nebulons in one claw and reaches menacingly forward with another. His stinger fires a blast at the ground, and many civillians flee from him. Over his head streaks four members of the Decepticon airforce, giving the sense that the bad guys are well and truly dominating things. In the Marvel box, Galan looks on with horror but Zarak has a knowing smirk. It's not quite the semiotic triumph of issue #1, but it's a solid piece that sells the book well.

Inside, we open on a splash of chaos in the streets of Koraja, capital city of Nebulos. Protestors burn effigies and wave anti-robot slogans around. Galan's decision to allow the Autobots safe-haven on Nebulos is not a popular one, or so it seems. The ruling elite of Nebulos look down. Duros wants to break up the demonstration before it becomes a riot, but Zarak insists that the people have a right to vent their anger. When fists start flying, Galen jumps into the thick of things to break it up, and receives a shiner for his trouble. This prompts the guards to disperse the crowd and arrest both men, though Galen insists that they be allowed to go free. This is, after all, all his fault. However, all is not as it seems. Zarak himself arranged the demonstration. We also meet Llyra, daughter of Zarak and lover of Galen. She doesn't share her father's assessment of Galen's motives, namely, that Galen wants the power of the Autobots for himself.

The opening works moderately well. The decision to allow aliens to live among one's society can't be an easy one, so it's not hard to imagine Zarak (and co-conspirators Spasma, Krunk, Grax and Vorath) stirring up trouble. Adding in a woman with a strong relationship to both Galen and Zarak was a deft touch. It gives more depth to their rivalry. She's also easy on the eyes; you gotta love alien fashion sense. Ironically, Zarak's prediction about Galen coveting the power of the Autobots won't be far from the truth.

Outside the city, Galen confers with the head of Fortress Maximus. They both want so much to preserve the peace, though again the Autobot proves the better 'man.' Galen admits that he may not be able to keep his people from going to war with the Autobots. Maximus, after recapping the events of the last issue, gives him his blessings to destroy them if necessary. The next day, the Council of Peers debates what to do next, prompted by continuing protests. Zarak eloquently advocates violence, which Galen tries to quell not by arguing the underlying facts but by pointing out the costs of total war. However, Gort, the first 'victim' of the Autobots, admits that his injures were an accident, not caused by aggression. This forces Zarak to back down ... for now.

Zarak hasn't quit his instigating yet, though. While on a tour of the new city being built by the Autobots, Vorath manages to clone the frequency to the Autobot headquarters on Cybertron. He then attempts to contact Cybertron to plead for help. Scorponok has by this point found the Autobot base and intercepts the signal. He plays along with Zarak's concerns, telling him that the Autobots will be plundering Nebulos and gets coordinates to a new world to conquer.

This part of the story falls flat to me. While I can pretty much accept Zarak rejecting the Autobots, I have a hard time believing that he would be so reckless as to summon random, unseen robots to fight them off.

Days later, Scorponok's forces arrive at Zarak's location. Scorponok wastes no time in showing his true colors, demanding from Zarak the location of the Autobots. Zarak tries to steer them to the Autobots in the forest, but Scorponok has his spark set on Fortress Maximus. Despite Zarak's protests that Fort Max is too close to a city full of civilians, Scorponok presses on. He launches an assault on the city walls, one which the Nebulons valiantly attempt to repulse.

Galen turns to the one group who can help, the Autobots. Maximus recommends that his head be reattached to his body, but Galen refuses on the grounds that if he broke his word on this, he'd lose all credibility. He attempts to use remote controls to operate the bodies, but this proves ineffectual. Fortress Maximus proposes a radical surgery, a way to blend Nebulon and Cybertron together. LLyra, having heard (somehow) of this, begs Galen not to go through with it, but he and four others go through with it. They give themselves the ability to transform into the heads of the five Autobots, though the original heads still exist and are in fact in radio contact with their bodies.

This is the crux of the story, at least from a marketing perspective. This is the moment when Transformers merge their consciousness with other beings, beings who form their heads. This basic concept would be examined from many different angles. In The Rebirth, we get a very similar origin, though there the Nebulons transform into the original heads of the Transformers, with the Transformer's personality and memories co-habitating the bodies. In the Japanese Headmasters series, the heads were independent robots, sort of proto-micromasters, who operated larger bodies like mecha. Masterforce would expand this idea to allow humans to operate non-sentient mechs. Not until IDW would another continuity return to the idea of an organic controlling a body with the original head still in existence and in contact with the body. It's curious to see all these different takes on the same idea. But I digress. 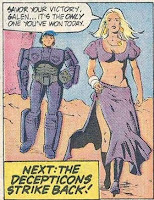 The Aubotot/Nebulon partnership makes itself known to the Decepticons with a bang. On the two-heads-are-better-than-one principle, the Autobots quickly rout their adversaries. The people of Nebulos are still nervous, though, as they're not sure the Autobots are any better than the Decepticons. They remove their heads and reveal their true selves, which calms the crowds and even produces outbursts of adulation from those that know the heroes of the hour. Llyra, though, is having none of it. She rightly points out that Galen has become everything that he despises, having traded his beliefs for expediency. Perhaps her father's prophecy is still ringing in her ears. In any event, she rejects him, leaving him to savor his victory.

This story isn't quite as strong as the one that proceeded it. There are a few logical inconsistencies which bring it down. Besides Zarak's actions, it seems odd that the Nebulons could hold off the Decepticons long enough to perform five intensive surgical operations.

Regarding Zarak's actions, I understand why Bob wanted to have Zarak contact the Decepticons. It makes him more complicit in his ultimate fate. That said, it strains credulity. He should either have given him different motives, or had Scorponok find his own way to Nebulos. If Scorponok had somehow contacted Zarak first and deceived him, playing on his existing fears, that would have worked better.

That said, the underlying emotional current of balancing idealism with practicality remains strong. Structurally, Llyra should have been introduced last issue, though better late than never. I like the idea that at least some of Zarak's relationship with Galen is colored by unwillingness to let his daughter go. Again, the irony is that his actions actually do push Llyra away from Galen, though not in the way that he would probably want.

Next issue, we're promised "The Decepticons Strike Back!." After the thrashing they received this issue, that'd be pretty necessary, though interestingly we're two issues in and they're still not the real antagonists of the piece. Presumably, that will change. Broken Glass! is available from Titan books in the anthology  Transformers: Trial By Fire from Amazon.com.
Posted by Jimtron at 7:24 AM