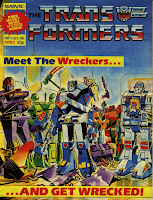 The cover was also by Ron Smith and it’s something of a mixed bag. I don’t mind the idea of the picture - the Wreckers standing around happily while the remains of Blitzwing lie scattered all around but the execution is far from perfect. The characterisation isn’t bad. Witness Impactor casually cleaning his harpoon after the battle while the Jumpstarters grin like maniacs. Rack and Ruin just kind of stand there, but they never exactly emote. Whirl and Roadbuster appear to still be throwing bits of Blitzwing around which is... well actually kind of sick if you think about... he’s definitely offline by this point. Of course, in the context of the story, “Blitzwing” is just a facsimile construct, which probably explains a lot of the callousness on display here, but it’s still a weird image, especially as the whole point of the first few pages is that this is not at all clear.

Anyway, this is one of those misleading jokey type covers that comics used to love, so it’s best not to take it too seriously. What I can take seriously, however, are the flaws in composition. Why, for example, does Topspin appear to be floating centimetres above the debris of Blitzwing and why is he clutching the Decepticon’s horribly out of scale leg like a teddy-bear while smiling like a psychopath? Impactor’s body does not seem to quite fit his giant legs and Rack (or is that Ruin)’s hammer is bent at an odd angle in order to not be hidden in the picture.

Strangely, when I first saw this, I thought it was a great cover, but unfortunately the flaws began to shine through and I ended up not very fond of it at all. The actual issue, on the other hand, is another matter.

We open with The Wreckers in mid combat. “WRECK AND RULE!” yells Impactor as he jets dramatically through the air brandishing his harpoon. This same harpoon plunges straight through the head of Shrapnel who dies instantly, his electrical systems overloading and allowing him to be hurled at Octane as a novel weapon. Both explode.

Whirl distracts Thrust while Rack and Ruin sneak up and disassemble him with extreme prejudice. Twin Twist rescues Topspin in the nick of time while Roadbuster takes out the remaining Decepticons, leaving the Wreckers...

“To be annihilated by the Decepticon reinforcements that’ll be pouring through that arch.” Yes, that’s right, this whole battle was a training exercise, and it’s just demonstrated Impactor’s greatest fear: that Operation Volcano cannot go ahead without Ultra Magnus. Impactor recaps this dilemma for those just joining the story and the other Wreckers find themselves in agreement with him. They must tell Xaaron and call off the offensive.

Impactor lets the Wreckers have some time off and they head to Maccadam’s Old Oil House - a Transformer pub. This establishment is special in that Autobots and Decepticons are each allowed in provided they leave the war outside. The Wreckers sit around mo 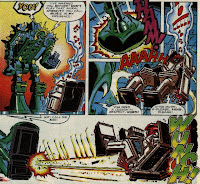 ping that they gave up, even though they know it was the right choice until a gigantic Decepticon by the name of Fang storms in and complains about the noise.

The source of this is the Transformer with one of the most off the wall alternate modes ever - some kind of Cybertronian piano. Fang is unimpressed with his musical stylings and starts to kick him around. Twin Twist gets up to help, but Roadbuster holds him back. This isn’t their fight.

Meanwhile, Impactor is telling Xaaron why they cannot go ahead with Operation Volcano. The Emirate says he understands and that he has made the right decision but puts a different spin on it, suggesting that if Ultra Magnus does not get back then Impactor will be praised for not attacking but if Magnus does return in time, and the Wreckers are not ready, then the criticism will be far more memorable. Impactor realises that Xaaron has him over a barrel.

Back at the bar Fang is still beating up the little piano guy, until, with a cry of “wreck and rule!” Twin Twist leaps from his seat and removes Fang’s leg with a single punch. Avenging this injustice has done the trick. The wreckers are fired up again and ready for Operation Volcano!

Back at Autobase Impactor turns up to ask for volunteers and is pleased to see that the Wreckers have all changed their minds too. Operation

volcano is back on. Wreck and rule!

This is the first issue set completely on Cyberton since the smelting pool arc and it’s a great one, if relatively simple. The exuberant carnage of the first few pages is well written and adequately pencilled, although if Furman really wanted to fool us he probably shouldn’t have wrecked quite so many prominent Decepticons.

The little arc that the Wreckers go through isn’t particularly original and it is reasonably predictable, but it is just fun to spend some time with some Autobots who aren’t from the Ark and I always welcome the opportunity to see a bit more of Cybertron during wartime. Xaaron is probably the standout character here with his ability to scheme for the good of all. A “wily old buzzard” as Impactor calls him. Not a “Robo-buzzard” or something, incidently, but just a plain old buzzard. I wonder where Impactor has seen one of those.

Smith does not distinguish himself on his only issue of Transformers. He is not very practised at drawing robotic anatomy and it shows in a good many awkward poses and s

ome down right strange inconsistencies. Cases in point, Impactor’s weirdly screwed up face while he’s talking to Xaaron and Twin Twist’s strange hopping motion that almost ruins the dramatic impact of his standing up to Fang. Credit where it's due however, I absolutely love the composition of this panel of Impactor, striding over burning Decepticon corpses.

Still, it’s nice to get away from Earth once in a while and this continues the larger story of “Target: 2006” without yet answering the cliffhangers from last week. A great an essential read, with slightly iffy art.  IDW's trade of  Transformers: Target: 2006

is available from Amazon.com.
Posted by Bishbot at 2:35 PM

It's a good issue but at the time it must have been incredibly frustrating to readers that the previous issues ends with not one but two intriguing cliffhangers that take two weeks to be followed up on. The Transformations page even acknowledges this - was this issue (which is rather redundant to the plot) an emergency fill-in?

I'm afraid I don't know one way or another whether it was an emergency fill-in issue, but I would suggest that it probably wasn't. For a start, it was written by Simon Furman, so there is no question of a writer's delay. I suppose art might have been held up on the next issue, but to be honest, it's not like Furman hadn't set this up. I think he just loves Cybertron and decided to set an entire issue there.

I hadn't considered that the wait would be frustrating, as I've only ever read it in collected form. I think it is a good enough issue to forgive this, especially in a weekly book. If fans had had to wait a month, it would have been more extreme.

I would suggest that Furman was intentionally using this episode to draw out the suspense set up in part 3.

Possibly, though the tone of the intro page does suggest the author of that felt the delay was something that needed to be apologised for.

That said it seems not to have created too much of a fuss and did start a mini-trend of plotlines being left dangling or even completely ignored for a few issues (or held over until annuals), culminating in the 1988 run when the comic regularly jumps between casts & settings with strands left dangling for ages at a time (admittedly not helped by the US material but the UK pacing is worse).