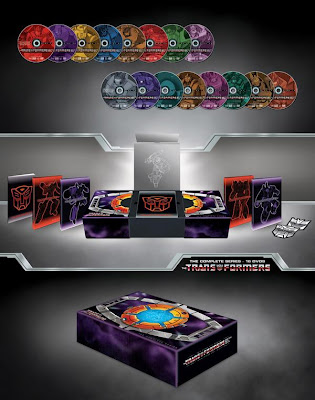 This summer, Shout! Factory came out with their impressive Transformers: The Complete Series (25th Anniversary Matrix of Leadership Edition)

. This 16 disk set is far and away the definitive Transformers G1 television series collection.

Where to start. Well, how about the packaging. You can see how much love was put into this set just from that. The box looks like the Autobot Matrix of Leadership, and even opens in a similar manner. You pull it open, then lift up a flap. Inside you see the booklet, plus the four cases for the disk. Each one features lovely artwork of Optimus, Megatron, Galvatron and Rodimus. The backs list which episodes are contained within, making finding the right episode trivially easy.

The disks themselves were quite nice, and the booklet is a well-designed episode guide with a few important bios scattered throughout. Oh, and there is some nice line art of Optimus on the inside raised flap, counterbalanced by Megatron at the bottom of the well containing the guidebook and the disks.

Of course, the real meat of the set is contained in the disks themselves. All 98 episodes are present, though we don't get the movie. (If there's a flaw in the set, it's the lack of a place for the movie, but then there have been some great releases of that in the not-too-distant past so it's no big deal.) The episodes have been cleaned up, so we get something a lot closer to the original broadcast version. The Rhino version unfortunately had some errors not contained in the original broadcast, and Shout! Factor was quite diligent about cleaning those up. No added sound effects either. It's nice to be able to watch them as they were intended to be seen - episodes like Heavy Metal War, in particular, do well by comparison to the Rhino version.

There are plenty of extras, too. There are some great interviews and retrospectives. All the Transformers PSAs are present. A few commercials are here, but they're basically youtube quality. In my view, if they were willing to settle for sub-broadcast quality, they should just have gone ahead and shown ALL the commercials instead of just the few they had. There is a fan-art gallery, which is pretty nifty. Finally, there are two galleries of character models, supplied by yours truly. They didn't use everything I supplied - not even close! - but there are quite a few character models present, which makes me all tingly! Anything which promotes character artwork is OK by me. (You can see my name on the last page of the booklet ... bitchin'!)

So, there you have it. Beautiful, absolutely gorgeous packaging. A solid job on the episodes. Chock-a-block with extras. This is everything you could possibly want in a Transformers DVD box set. You can really see how much they cared about every aspect of the production. It's available for preorder on amazon.com, so buy one if you haven't already. You won't regret it.
Posted by Jimtron at 12:53 AM