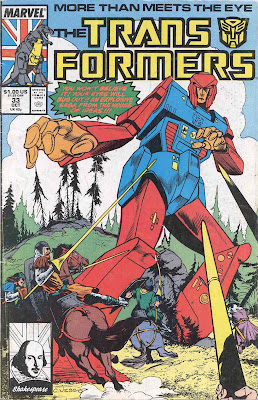 Man of Iron is the thirty-third and thirty-fourth issues of the G1 Marvel US Transformers story. It was originally published in the UK and imported to the US to fill in a hole in the production schedule. In fact, it is the very first original UK Transformers comic. In that context, it has already been reviewed by my colleague Bish. You can read his reviews of parts one and two here, and parts three and four here.

The cover of issue 33 features an oddly-colored Transformer battling some medieval knights. The robot shares many design elements with Megatron, including his chest and his legs, though the arm and head are very different. The colors are very different, all blues and reds. From context, it would make sense for this to be the eponymous Man of Iron, but the colors are all wrong and he's sporting a Decepticon symbol. Megatron, though, isn't in this story at all, so he doesn't make much sense either. It doesn't make much literal sense, though thematically it does rather capture the flavor of the book. The blurb sells the story thusly, "You won't believe it! Your eyes will bug out!! An explosive saga from the house of ideas!!!" Note the gradual accumulation of exclamation marks, perhaps to compensate for the lack of them in the title. Oddly, nothing is said about this being a UK story, though the Marvel box features a Union flag (with the current Autobot leader, Grimlock) and the subscription box includes a portrait of Shakespeare! That's all a bit much, really. The cover is somewhat interesting - who wouldn't want to know who this strange bot is battling the warriors of yore, but the strange perspective and over-the-top Britishness don't really work for me.

The first page, specifically the text above the image, explains that this is an old British story, thus the presence of Optimus Prime. We then move into the story. Decepticons bomb a sleepy English castle, though they're really just launching a probe. The curator goes to investigate, though not before telling his boy to leave the woods near the castle. His son, Sammy, ignores this missive and runs smack-dab into Jazz. Naturally, the boy is panicked and runs off. His father draws a connection between Sammy's story and an old legend, the story of the Man of Iron. It seems that a metal man of great height and girth has visited these parts thrice before. Sammy recognizes a drawing of this being as looking more or less like what he had seen that day.

Sammy then has a fitful dream of starships and Skywarp and Mirage, a surreal experience of a floating bed and a tumultuous wind. It's not clear how much is real and how much is a dream, but his father witnesses Mirage walk off with the drawing of the Man of Iron. The next day, while his father learns about a massive object buried under the castle, Jazz introduces himself to Sammy while in car mode and asks Sammy to get inside. 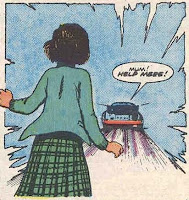 Sammy is leery about accepting a ride from strangers, but Jazz convinces him to get in and just pretend to drive. Some light interrogation follows, interrupted when Sammy's mother sees him in the car. Jazz slams the door and drives off, as Sammy cries to her for help.

Thus ends part one. Easily the most compelling part of the book are the two pages of historical record. We don't often get to see men on horseback squaring off against Autobots, so it's a nice image to explore. The dream sequence is appropriately bizarre, but unfortunately the mix of fantasy and reality is a bit too blurred. The ending, with Jazz driving off while his mum watches helplessly, is well executed, but suffers from thirty-odd prior issues of good behavior on the part of the Autobots. Anyone who's got an even passing familiarity with the comics knows, beyond a shadow of a doubt, that Jazz has benign intentions. It undercuts what is otherwise a powerful image. 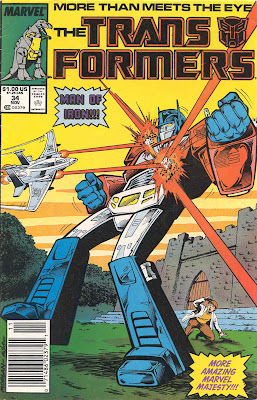 Morgan's cover is much more literal than Vess'. Optimus Prime stand before a boy, probably Sammy, protecting him from the twin blasts of a generic Decepticon seeker. Prime is staggered by the blow. A castle is in the background. While it connects more directly to the story inside, it's somehow much less inspired than the previous cover. No elements really stand out as compelling, so the overall effect is underwhelming. "More amazing marvel majesty!!!" the cover declares. It seems really odd that both covers would specifically call out that these issues are from Marvel ... what was it precisely about the UK stories that made the editors think the Marvel-ness specificaly needed to be emphasized?

Inside the book, we start off with more UKisms. "Tally-Ho, Faithful ones! Here it is, straight from Marvel U.K., Man of Iron! Get a hold of yer wig-hat! Dear old Aunt Petunia never read anything like: Man of Iron." It's a pretty funny way to start things off, I have to admit. Way over the top, but clearly intentionally so. At least they stayed off the cover this time. 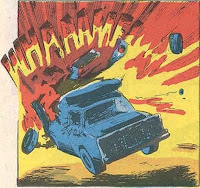 Sammy, inside Jazz, is being driven to meet the Autobots. Mirage and Trailbreaker join them, but the unlikely convoy is attacked by Thundercracker and Skywarp. An uncharacteristically brutal battle follows. A direct hit on Trailbreaker slags him. We get some great dialogue as he sits there, on fire. "It's no good. Everything's gone ... just plain ... ruined ..." Mirage's electro-disruptor disorients Skywarp, prompting the 'Con to smash into an overpass and keep on coming. Bluestreak takes out the sneaky Seeker, prompting him to crash violently into the ground.

Having defeated their adversaries, the Autobots bring Sammy to meet their leader. Sammy tells Optimus Prime about the Man of Iron, confirming their suspicions. The Man of Iron is an Autobot, part of the crew of a rescue craft. Prime knows that the Decepticons will do anything to keep the ship out of Autobot hands, making it imperative that the Autobots get there first.

Of course, why the Autobots wasted a whole day and a half mucking around with Sammy when they could have been securing the ship is open to interpretation. It seems to me that a bit of literal digging on their part would have unearthed the Man of Iron just as sure as an explanation of the drawing, but then we'd have had no story. It's a narrative flaw. Again, earlier in the run, characters like Sammy may have been necessary to frame the Autobot/Decepticon conflict in human terms, but after almost three years, it feels superfluous.

Back at the castle, humans continue to excavate. This causes the Man of Iron to reveal himself and begin to attack. This is clearly not an Autobot of the Optimus Prime 'all humans are sacred' scool. He's got a ship to protect, and he's not about to let these scurrying creatures jeopardize his mission. Unfortunately for him, Starscream shows up and vaporizes him.

Half a mile to the north, the Autobot shuttle is under attack. Traveling at speed, Jazz has Sammy jump out, then rams Starscream. Four miles up, the
battle goes well for the Autobots, who drive off Laserbeak, Buzzsaw and Thundercracker. Having won, the Autobots are in a position to claim their prize ... but decide not to. Instead, they blow up the rescue craft. Inside, an Autobot named Navigator sleeps, never to awaken. Life around the castle slowly returned to normal. Sammy would never see Jazz again, though the Man of Iron would walk through his dreams.

This issue is marred by logical inconsistencies. If the escape craft was such an important military objective, why would the Autobots blow it up? Certainly, why would they blow it up without at least checking for occupants first, along with usable equipment. As noted earlier, Sammy is more or less completely unnecessary to the plot.

The artwork tends to be very toy-inspired, which makes for some awkward poses. That said, the battles really were top-shelf. Lots of bots blowing up and smashing into things.

There is another factor to these issues. Where we last left our heroes, Blaster was under arrest by the Protectobots. We are promised a showdown between Bruticus and Defensor. Instead, we get this. It's certainly not a bad story, but it's so different from what we were expecting that the already jarring tonal-shift is exacerbated. Had it been placed at a natural break-point in Budiansky's run, say one issue earlier, I reckon it would be a more fondly remembered outing.

Man of Iron is worth checking out. That said, it can be difficult to do so. It hasn't been reprinted in modern times, meaning that you can either hunt down the original issues or look for the UK Collected Comics #3.