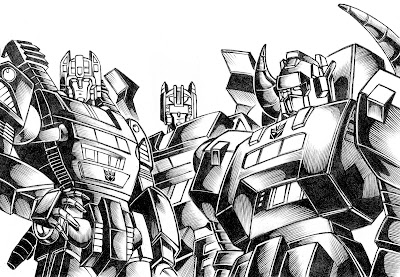 Wow, almost a week with no posts. I'm slipping. The truth is, I've had a super-busy week, with a board meeting for the dot com where I work, some Transformers stuff, and some personal stuff. I'll try to keep the updates flowing, though things might not get a whole lot better till next week.

It's times like this, though, that I'm blessed with some other excellent contributors. Case in point, another edition of Iván's Gallery. This week, Iván brings us the Destron Headmaster Jrs, no doubt to tie into their weapons from last week's Ark Addendum. Here's what the artist has to say about the piece:

Rare,for this era there was exists the Headmasters, but the Japanese have rejected the initial idea.
These characters were renamed Transtectors, so the robots functioned as armor for the human who happened to be the pilot,
transformers while dormant.
Here they are: Cancer (Squezeeplay in North American version) Wilder (Fangry) and Bullhorn (Horrie - bull).
But unlike Siren - Nightbeat and company, these are not repainted.
In any case I personally prefer the Japanese version, the characters have more character, are better defined and differ more between them, apart from having its own history.

On the figures ..... if I can, also try to always buy the Japanese version, the human component has a picture, and are the originals ... second, those letters have niponas ... magic.

That's it from him! Catch you on the flip-side.
Posted by Jimtron at 9:22 AM