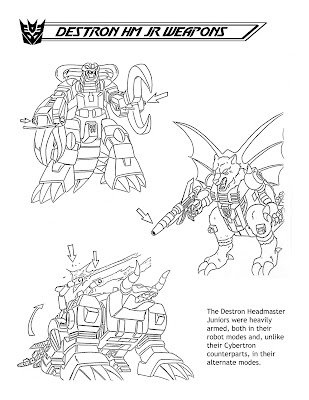 Another week, another set of models. This week I bring you the weapons of the Destron Headmaster Juniors.

Unlike the Cybertron Headmaster Juniors, this trio remains armed to the teeth, even in their alternate modes. No namby-pamby rescue vehicles these, instead we get vicious crab/cobra monsters, a winged wolf thing, and mighty bull. While Cancer and Bullhorn get pretty cool weapons, Wilder just holds his regular gun. Boo! And yet they made him the leader.

Meanwhile, I'm trying to convince the good folks over at tfwiki.net that we really should be cataloging GoBots material. Maybe I'm just psyched now that I've got the series on DVD and most of the animation models. It's an uphill battle, but I feel like I'm winning over some supporters. I'll keep you posted.
Posted by Jimtron at 10:04 AM

No need to convince me about the GoBots, I'm already with you on this one. :)

I'd buy a book of GoBots animation models.

I would prefer a book of Machine Robo: Revenge of Cronos models, mind you.

Hell, why can't they finish releasing that series on DVD?

And I think GoBots is already one foot in to the TF Wiki, they may as well go all the way.

I support a GoBot wing on the TFWiki. Bring it on!

Is there are subtitled version of Cronos anywhere?

I'm aboard for the GoBots all the way. David Oxford is right; they already acknowledge GoBots elements on the tfwiki already; if those characters that have been cameo'ed and used as eHobby repaints are from the Challenge of the Gobots as intended and referenced as such from official TF sources, then that world should be a part of the TF universe in some shape or form as well, right?

The Challenge of the GoBots series will most likely never be released on DVD in an official capacity, unfortunately.

Please add me to the list of people that would love to see the GoBot animation models.