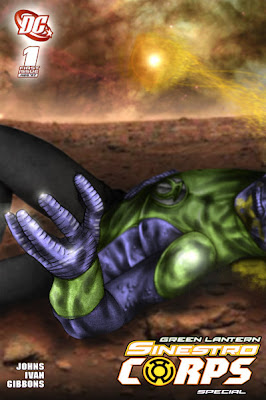 This week, Iván continues his exploration of the Sinestro Corps. This cover features one of the most unique villains in Green Lantern's rogues gallery: the sentient pathogen Despotellis! Here's what the artist has to say about it:

Well.... quick drawing I did in a couple of hours about a microscopic sentient bio-virus, Despotellis is likely the smallest as well as one of the deadliest members of the Sinestro corps.
Who is not afraid of a virus? who is free from the threat of a virus? anyone.
The earliest activities of Despotellis as a member of the Sinestro Corps were chronicled in the Book of Parallax. As read by Lyssa Drak of Talok IV, Despotellis first infected the homeworld of Green Lantern Reemuz. When the Green Lantern returned to his homeworld, he found thousands dead in the streets. The Green Lantern quickly surmised the cause of their deaths was related the yellow power battery he found. Reemuz took the power battery across the continents of his homeworld. He was searching for survivors as well as their attacker, but finding neither. He grew tired and ill, and just moments before his death realized his attacker had infected him. Despotellis revealed his presence as he took the power battery and headed out amongst the stars. Before returning to Qward, Despotellis infected 85% of the 714 inhabited worlds in space sector 119.
Despotellis next appeared on and in orbit of the planetform Green Lantern Mogo in Green Lantern Corps....