Review: War of the Worlds, the series ep 8 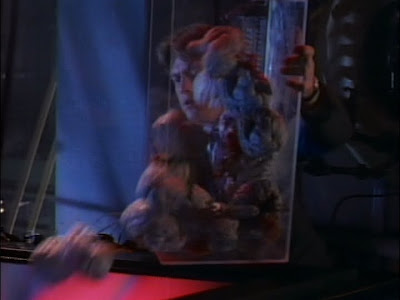 The eight episode of War of the Worlds, the series is called To Heal the Leper. It features the desperate measures taken by the Advocacy when one of the trio is stricken with the chicken pox, and with the confusion the disruption in their routine causes for the Blackwood team. The aliens steal human brains to attempt the cure, first from cadavers, then from living victims. When the resources in their cavern prove insufficient, the Advocacy leaves the safety of their lair and travel to a human city. Meanwhile, the complete cessation of alien signals baffles the heroes. Ironhorse thinks it might mean the aliens have left, but Harrison can't accept this. Even when Sylvia van Buren confirms that she can no longer hear aliens, he cannot bring himself to believe it's all over. He connects the missing brains (from a morgue and from a hair salon named 'Out of Your Mind') to the aliens, then, fed up with his doubting teammates, tracks the aliens to a power plant. He witnesses the revival of the third Advocate, then is forced to barricade himself in an office when they realize he saw their procedure. As he records his last thoughts, the barricade is breached ... by Ironhorse and McCullough. The aliens have gotten away, though they left their medical device behind. The two scientists examine it with glee, but it disintegrates the moment they lay a finger at it. Some oddly triumphant music plays as the credits roll.

The Good: Ironhorse likens the strangeness in alien signal patterns to the barking of the Coyote; apparently random, but concealing sophisticated meaning. When Suzanne states that science hasn't found evidence that Coyotes communicate like that, his simple replies that his people, the native Americans, know better. He underplays the scene, which makes it more real than the many over-the-top performances to be found elsewhere in this episode. 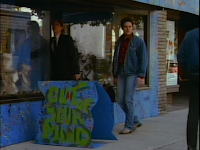 Despite myself, I'm putting the "Out of Your Mind" hair salon in the good column. The pun is SO over the top that I'm forced to applaud it.

Ann Robinson as Sylvian van Buren. Always nice to see her back, and letting her play the character as sane, however briefly, allows her to give some more depth than the usual rantings that she does.

The indecisive Advocacy, down a member. It's nice to see what they're like down a member, and how helpless their followers are without them. The makeshift alien tech is, as always, pretty cool.

The Bad: The whole brain-snatch thing seems more torn from horror than from science fiction. The whole thing is pretty hard to believe. Also, the brains are pretty obviously props, lacking the right texture or gore. 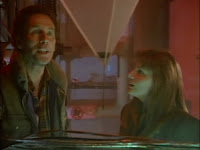 Harrison, going to the power plant half-cocked and alone. I understand he was frustrated with the team, but they were the ones who pointed him in the direction of the power plant. If he'd gone in with Ironhorse, they could have eliminated the threat of the Advocacy once and for all.

And in that vein, why did the Advocacy grab new human bodies and go out alone? What stopped them from bringing extra troopers with them?

Finally, Harrison should have known better than to touch the device. What if it had been boobytrapped? Bye bye Blackwood team. 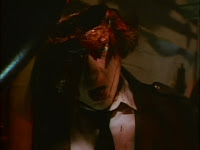 The Ugly: How about all those ripped-open skulls?

An interesting episode. The Advocates are a lot more hands-on than one would expect, which doesn't work all that well. The disease angle feels played out and redundant here, since that was what the movie and pilot were about. It's all a bit too contrived for me. The good character moments aren't really worth shifting through the logical weakness to get to. After the strong previous episode, this is something of a disappointment.  War of the Worlds - The Complete First Season

is available for purchase on DVD.
Posted by Jimtron at 10:56 PM