In the shadow of the biggest Transformers event since ... well, since the last huge Transformers movie, I finished dotting the jays and crossing the cues on these two books and uploaded the final image files to IDW over the weekend. Obviously, the vast bulk of the work was done months and months ago, but last week I got the copy edits back and had to go in and make sure that all my quotation marks faced the right way and that I never used a dash when I meant to use a hyphen. I have to say, I'm really impressed with how IDW's stepped up its editorial process. They've always been good, now they're hitting excellence. At BotCon, we shared some pages that will be appearing in the book - I figured I'd post a few of them here, along with some impressions of each book.

is a fun book. Character models remain one of my strong loves, and this book is chock-a-block with them. If you have either volume, you've got a pretty good idea what this will be like. If you have both volumes, well, I like to think that the more compact size and the extra material I managed to cram in makes it worth your while. This is probably old news by now, but by removing material that was duplicated across both volumes, I had enough space to expand on the Masterforce section of the book. Now the Godmasters get just as much love as the Headmasters and Pretenders before them, something that always bothered me about The Ark II. I also added in a few other pages here and there, like the Decepticon's underwater headquarters as shown off at BotCon this year. Finally, there were quite a lot of pages where I had some extra model appropriate to a character, like say Motormaster's heads, so I added those in when I could. I even got the chance to speak to a few of the original series designers and get their input. But extras aside, I think that a combined volume is the ideal way to consume this material. This book puts models together from every Generation One Transformers season and show, and is as comprehensive as I could make it. I hope you enjoy it. 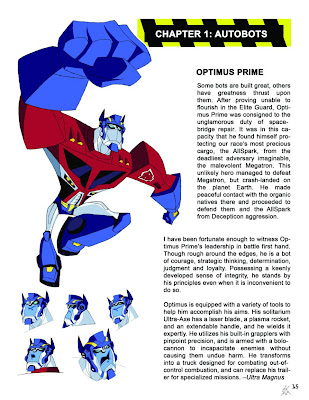 As fun as The Ark is, my magnum opus (that sounds vaguely like a Transformers name, doesn't it?) is definitely  The Allspark Almanac

. So many things made that book fun to put together. Just getting the chance to work with people like Derrick Wyatt and Marty Isenberg was an amazing experience. We were also fortunate enough that other stakeholders in the Animated universe, like Hasbro, Takara-Tomy, Titan Magazines, even the writers of Bee in the City, were willing to lend us their time to make sure that every aspect of this amazing universe got its due.

But the big difference was the availability of material. With The Ark, I had to hunt down old models, most of which required restoration. Even today, many models from G1 have eluded me, like the episode-specific fembots or the main characters from 1989 and 1990. With the Almanac, I had access to the entire Cartoon Network archives. Color or black&white, characters or props, background paintings, scripts and storyboards .... having this much material to work with was a sheer delight. It shifted the focus of the book from the acquisition of material to the disposition of material. As much as I love the b&w designs, getting to lay out color models and write up bios and character histories is much more creatively satisfying. Some of the pages we got quite experimental with, but given the whimsy that is Animated I think it all works. The decision to do the whole book from an in-universe perspective, while challenging in some spots (I'm looking at you, episode guides!), helped make this an absolute joy to write. I hope you find it as entertaining to read.

Big couple of weeks for Transformers in general and me in particular. Next week, once it's calmed down a bit, the blog will most likely return to its regularly scheduled program of Ark Addendums on Tuesdays. See you there!
Posted by Jimtron at 9:31 AM

Seriously though, I can't wait until the complete Ark arrives on my doorstep and I'm seriously considering adding the AllSpark to my order. Is it all inclusive (all 3 seasons) or does it just cover S1 and S2?

When we did the bulk of the work, Season 3 was just starting, so we opted to just cover seasons 1 and 2. We have a pitch in to IDW to do a volume 2, covering the third season as well as the toys, so keep your fingers crossed!

Looks promising! I do have one question about the Almanac - Does it feature most of, or all of the models of the bots? I mean, it sounds like you had access to them, but I'd just like to have confirmation. Either way I think I'll love it. :)

Hey, Malunis. It features most of the models. Basically, it features the daylight models of the bots from every angle that they had, as well as all their gear and any headshots. What it doesn't feature is every different lighting condition, since that quickly became redundant. Injuries I sometimes included and sometimes did not, depending on how interesting they were and what other models I had for that episode. I think it's as much as anyone would actually want, though I could probably post some alternate lighting condition pages as an AllSpark Addendum if there is demand.

Glad to hear it's a wrap on the books. Can't wait what the finish product looks like. Especially with the Almanac. I'm for sure getting them both!

Hey, is that a flip-page action pocket-bot in the corner?

YES! I can't wait for this - very much looking forward to it, a little bummed that season 3 is not covered - as I think it was the best one so far, but much of the characters had already shown up in season 1 and 2.

I have a question - apart from the multiple angles and head shot for the bots - will we be seeing their alt modes in various angles? That'd be great.

I'm eager to get this as I'm hoping it'll be somewhat of a 'bible' for all things TFA. Weeee!

Kurisama, there were a surprisingly large amount of models for season three ... more than we could fit in the book and still have room for the other material that we wanted to. The upside is, it'll make a terrific 2nd book, assuming that Hasbro and IDW are interested. As for alt modes, yes, generally we'll see them from multiple angles.

Thanks for the speedy reply - It is my sincere hope that there will be more TFA material, 2nd almanac or other wise! Too good of a series to die!

IDW and Hasbro would be fools not to want this to continue :D Again, can't wait to get my greasy little hands on it - lol.

Hi Jim. I am Fantom.The Ark looks friggin' awesome, man. Would love to get it. Hey, do you know how I can put that TF Wiki article link thing on my blog? Would be really helpful if you could. Thanks. Love your blog, is awesome.

Howdy, Fantom. Glad you like the books and the blog.

This page can walk you through adding your own TF Wiki Go Box. http://tfwiki.net/wiki/Transformers_Wiki:A_GoBox_of_your_own!

I am getting the Almanac as soon as it comes out. There should be a volume two!

I have both volumes of the Ark. Is it possible to have the extra material posted on a website?

Hey, Anonymous. The reason that that's not really viable is that there are very few strictly new pages in the book. Most of the new material is integrated into the book.

For instance, I got a lot of new material for Godmasters, which allowed me to greatly expand those pages. Take Ranger. In the first book, I had the front of his human front, a headshot or two, the front of him armored form, the front of his car, and the front of his robot mode. In this book, I got a lot of extra material that's appropriate for him. I'm not going to put all the backs on a second page, that'd look awful. Instead, I give one page to his human models (front and back of his armored and unarmored form, some head shots, him as a mountie, and the RCMP logo. One page is for his transtector; 3 angles on the car, 3 angles on his robot, two head shots, two gun angles, and his interior.

All told, more than 80 pages got something new on them. Most were not as extreme as Ranger, but still, it wouldn't really be possible for me to go through the book and pull out only the new models. Understand that I just want to make the best book possible, and that I've gotten a lot of new material since I did the first two books. I'm not trying to punish people who bought the first two books, just reward the people who buy this one. I hope you can appreciate that.

I'm very excited about this new book! When will it be released?

How about dropping us some of the art that didn't make it into the Allspark Almanac?

Or are you keeping it for Volume 2???

Razorfire: I have it on good authority (ie, Jim) that both books will be released in August.

I can't wait to put my hands on both books. I hope IDW give you the greenlight for a second volume of TF Animated :)

I just bought the Ark Vol 1 the other day. As an artist and writer its an invaluable resource for inspiration. THank you for your hard work.

Caitlin: After the Almanac comes out, I may post some material from S1&2 that didn't make it in, though to be honest there really isn't very much of that besides the lighting. S3 stuff I'm going to hold off on in the hopes of doing a 2nd volume.

Carlos: I sure hope so too!

I have a question about your co-author. Is Bill Forster a professional model? Because he could be one. I mean WOW! Sexy!

I can't beileve nobody mentioned it, but maybe I'm out of the loop. On the Decepticon Headquarters page it states the name of the ship as Victory. I never knew that, I mean I know the fan continuity has always unofficially called it the Nemesis based on BW.

I guess my question is, where does that information come from- model-sheet, writer, or some other source (cool model-sheet by the way)?

That name (and a couple of other ships that get named in the book) comes from one of the original series designers who was kind enough to lend some insights for this project. I believe on the model sheet it was just Decepticon ship.