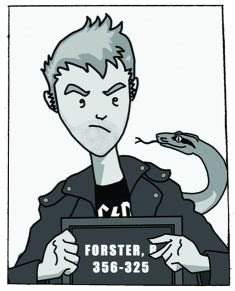 I think a quick introduction is in order. My co-author and partner in crime Bill Forster has graciously agreed to drop in from time to time and post about his various escapades.

Some notes about Bill: he's the more artistic half of our team. If there is an original picture in one of our books, it's about 10:1 that he drew it. He used to be the Art Director over at the Intrepid Sea Air Space Museum in New York City, before he moved out to LA to pursue more creatively satisfying endeavors.

He's also quite the adventurer. He's gone to some interesting environments and done odd things, so I thought it'd be neat for him to share some of his experiences here.

This first tale is quite relevant to Transformers - it's about him getting a Transformers tattoo on national television, on the program LA Ink on the Discovery Channel. If you don't know, that's actually quite an impressive feat. While pretty much anyone can walk into any tattoo parlor and get a Transformers tattoo, if you want to get one on TV you need to get Hasbro's permission. Still, Bill can be both persistent and persuasive. Much to my surprise (and thanks to a lot of support from IDW), Hasbro licensed LA Ink to use their intellectual property.

But why should I get all the fun? Without further ado, Bill Forster and his first adventure.
Posted by Jimtron at 12:04 AM