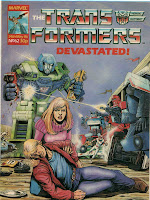 “Devastation Derby!” Part 2 was written by Simon Furman, drawn, once again, by Will Simpson, coloured by John Burns, lettered by Mike Scott and edited by Ian Rimmer.

The cover was probably by Will Simpson - www.tfwiki.net is somewhat unclear on the matter, crediting it to Robin Smith on one page and Simpson on another - however it looks a lot more like Simpson’s work than Smith’s so I tend to assume it’s by him. It depicts Jesse cradling an unconscious Buster in the foreground while Devastator crushes a demolition derby car in each hand and the Autobots fire on him. The caption is simply “Devastated!” which seems appropriate. I like the idea behind this cover more than I like it’s execution. Jesse and Buster look very good, and the grief and panic on Jesse’s face is very well rendered. The problem is the Transformers themselves, and unfortunately this comes from the interior art. Simpson draws the robots in a very stiff style, clearly derived largely from the toys, and it just feels out of place compared to most of the issues surrounding this story. Simpson brings a fundamental lifelessness to these robots that I really do not enjoy. Other artists make them feel like people, Simpson’s robots feel like things especially compared to his very naturalistic human characters. When the UK book started, this approach did not feel so out of place, but the style has moved on, and, in my opinion, largely improved since then, and Simpson’s work feels like a throwback.

The story opens with two small boys trying to climb over the fence of the demolition derby in order to get in without paying. They are excited by the deafening sounds of clashing metal from within, unaware that they are actually about to bear witness to a clash between giant robots! As they scale the wooden fence, they just manage to avoid the wreck of a car as it bursts out of the arena, hurled by an unseen force. Their eyes grow wide as they realise what is happening...

A splash page depicts Devastator fighting Ironhide and Tracks, and, considering I don’t really like Simpson’s art, it’s a good piece: “Welcome to the Devastation Derby!” I did notice, when comparing them, that Devastator is somewhat larger in this panel than in Simpson’s splash from the previous issue, based on the size of the cars he is smashing, but to quibble about Transformers scale issues is to drive any normally mild-mannered reviewer completely insane, so I do not worry...

“That hurts!” says Devastator, as Tracks shoots him in the chest plate. He reacts by knocking the Autobot down with a car and bringing his Mixmaster foot down to try to stamp on him. Smokescreen, in vehicle mode, seeing this, and still with Sparkplug aboard, decides to help out with one of his “stock-in-trade diversions!” As Sparkplug complains that he needs to get to

Buster, Smokescreen yells to Tracks that he has the human the Decepticons are looking for. Devastator, falling for this, turns sharply and, the Constructicons still not completely comfortable in their combined form, trips, plunging to the ground.

Against this somewhat compelling evidence, Ironhide, although pleased with Smokescreen’s gambit, worries that Devastator seems more fluid in his movements than the last time they faced him. “I just hope Brawn has got Buster to safety” he thinks, as he prepares to move in on the giant Decepticon once more. Unfortunately, Brawn, in robot mode, in the middle of the crowd, has been unable to find Buster, and is succeeding only in sewing more panic.

Devastator is back on his feet, and Ironhide and Tracks now move in. Tracks shoots the giant Decepticon squ

are in the face with his “black light gun” which is something from his tech specs which was used at least once in the cartoon, but proves underwhelming here. I’d imagine that it was a fun concept to make up, but it is really difficult to draw a convincing beam of black light and it looks much more like Devastator has been shot with oil or something. Nevertheless, it works, he is temporarily blinded! Smokescreen prepares to strike, but out of his window, Sparkplug spots Soundwave in the stands, and deduces that must be where Buster is! Smokescreen breaks off his attack, going after Soundwave. This action distracts Ironhide, and he is smashed to the ground by Devastator’s mighty fist.

Nearby, Jesse pleads with the panicking crowd to help her get Buster to a hospital, not realising that Soundwave is bearing down on them. She takes the time to explain how they got into that situation for anyone who didn’t read the previous issue, and then tries to drag him to safety herself. She is offered help, but unfortunately for her, it is from Furman’s much wittier than average Soundwave.

Jesse manages an impressively spirited protest but of course she is unable to prevent Soundwave from reading Buster’s mind. What he discovers is not revealed, but his surprise is evident from the exclamation: “By the matrix! Literally! This changes everything.” The Decepticon notices Brawn sneaking up on him and shoots him square in the chest, Smokescreen’s shouted warning coming too late. Smokescreen transforms (Sparkplug presumably having jumped out at some point) and holds his gun on Soundwave, who says that there is no need for threats as “this whole episode is a sad mistake on our part.” He asks them to “Allow us to leave in peace and no harm will come to those you seek to protect.” The Autobots are thoroughly confused as Devastator separates and the Decepticons retreat. Soundwave drops his simpering polite act, which wasn’t fooling anyone, and tells the Autobots that they will not be so fortunate when they meet again - transforming to tape-deck mode and riding off in the back of Long Haul. Smokescreen is convinced that whatever Soundwave discovered about Buster, Prime is going to want to look into it personally.

Later, Ratchet heads a column of Autobots, all in vehicle mode, as they head back to the Ark. Sparkplug is raging, furious with the Autobots for tricking him into putting Buster in the wrong ambulance and effectively kidnapping him. Ratchet, however, is convinced that whatever is wrong with Buster is not something a human doctor will be able to help with. Buster is convulsing in his vivid nightmare, muttering about having to run...

Back at the Decepticon base, Shockwave is furious with Soundwave for failing to secure the Witwicky boy. Soundwave staves off his own destruction, however, by telling Shockwave that his mind-scan of Buster revealed that locking inside his mind are the secrets to the future of the Transformer race! And on that bombshell, the issue ends, leaving us hungrily awaiting the beginning of the next story: “Second Generation!”

Part 2 was, in general, a lot better than Part 1, mostly because there was a great deal more action. The fight with Devastator was fast-paced and well designed without being confusing and the demolition derby was a great setting for such a set-piece. I thought that beginning with the calm of the two boys trying to scale the fence was a very good decision, as showing epic Transformer conflict from the perspective of the poor humans caught in the middle is often a very effective device. None of the Autobots really get much time to shine. This is pretty much all we’re going to see of Smokescreen for a while now, and while we now know that he is young and impetuous, at least compared to Ironhide, this story has not really been about him. Nor has this part been about Buster, really, since he spends the entire time unconscious. Sparkplug is probably the character with the most to say in this issue, although his worried father act is 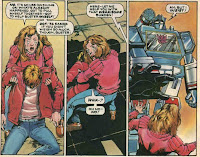 nothing new, and perfectly understandable. I really enjoyed Jesse standing up, impotently, to Soundwave, who, as always, gets the best lines. One really gets the impression that Furman really enjoyed writing for Soundwave, during this time, and, while I tend to prefer my Soundwaves closer to the mono-tone menace from the cartoon, I cannot deny that Furman makes him a very fun character, always running his own agenda, while, unlike Shockwave or Megatron, certainly not after power for it’s own sake. His frequent villainous utterances are about as subtle as a brick to the face-plate but they do have a certain camp value, although there is nothing to top “my beauties” from “Dinobot Hunt!”

The mystery about what is happening to Buster continues to intrigue, and the setup for “Second Generation!” is suitably teasing, although it is a little strange that Soundwave does not explain to Shockwave (or the audience) why what he discovered in Buster’s mind caused him to release him to the Autobots’ care, which is the most obvious question that I came away with, given how jealously the Decepticons have coveted the creation matrix in the past. This feels like writing for a plot that Furman wants to tell, rather than a logical progression, but I am willing to give him the benefit of the doubt to explain it in the next issue.

I won’t keep reiterating that I do not enjoy Will Simpson’s art in this story, but I don’t. He’s technically a perfectly accomplished artist, as his humans demonstrate, but he has a vision of the Transformer race that I do not enjoy at all. Oddly, this has not been a problem in previous stories that I have actually praised, such as two issues of “Dinobot Hunt!” and “Christmas Breaker!” so I’m not sure whether he has changed his style or the different colourists have highlighted the aspects of it that I like the least. However, I will add that Simpson's

robots look a lot better when they aren't supposed to have humanoid facial features and his versions of Shockwave and Soundwave are perfectly decent, as shown in this last panel of the story. The colouring is pretty good throughout, but if I may be permitted to make a tiny nitpick I’d have to say that people need to stop colouring Ironhide’s face red! It looks awful!

As a two-parter, “Devastation Derby!” is not completely thrilling, but manages to entertain, especially in the second half, and is very effective as a lead-in to “Second Generation!” as such, it has been collected in the Titan UK book of the same name, which is still available on amazon.com: Transformers: Second Generation