Zob's Thoughts on Revenge of the Fallen Ravage 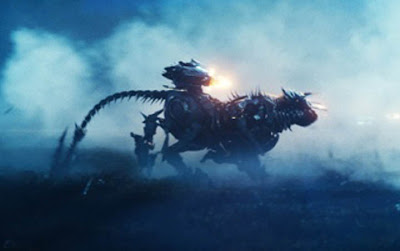 Ravage has become something of a staple character in the Transformers mythos—since his appearance at the beginning of G1, various incarnations of him have popped up in the Beast Wars, Transformers: Energon, Alternators, Robot Heroes, and Transformers Universe toy lines. While other characters have been reimagined multiple times to accommodate the whims of designers and to fit within a specific toy gimmick, Ravage remains, and has always been, a black cat. The latest version of the Ravage character is paired with Soundwave, appropriately enough, and Ravage is sent by Soundwave into the ocean's depths to locate the remains of Megatron.

As a robotic panther, Ravage is around five inches in length at the haunches and nearly nine inches in length from nose to tail. He's covered in dangerous-looking spikes that are actually totally kid-safe due to their rubbery vinyl construction. The juxtaposition of an alien styling mixed with a familiar animal form is not a new one, and his overall aesthetic is decidedly Zoids-like—especially the purple lightpipe in the top of his head that looks a great deal like a cockpit. (This resemblance is particularly appropriate given Tomy's acquisition of the Takara brands.) He's predominantly a muted black with faint traces of metallic flecks embedded within the plastic, accented with silver and metallic blue. In a movie franchise where multiple characters have been completely redesigned, bearing little or no resemblance to their original G1 counterparts, Ravage is surprisingly close to the 1984 version. The original toy was almost perfectly flat, of course, because he transformed into a cassette tape, so the new version is decidedly more round and three-dimensional. That said, all the basic elements are here—he's a mechanical-looking black-and-grey kitty cat with guns on his hips. The only thing that really seems out of place is his single eye, which gives him an H.R. Gigeresque vibe. 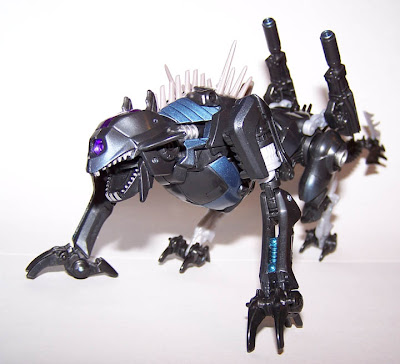 Ravage has around 24 points of articulation, depending on how you want to tally them up, with many of them in his legs to achieve a wide range of poseability. His front shoulders, for example, can move on an axis in three different directions, which is particularly rare for Transformers that turn into cats, most of whom have had limbs that simply swivel. His waist has a ball joint that provides some surprisingly limited movement, but due to his built-in gimmick his neck doesn't move at all. It's the lack of a neck joint that prevents this toy from standing upright and assuming an unofficial humanoid configuration, which otherwise would have looked an awful lot like Beast Machines Cheetor. His tail also moves in five different ways, though the swivel joint at about the halfway point is weak, and the tail tends to pop off regularly. This is, for what it's worth, the only major design flaw I think the toy has. Pushing the lever down on the toy's back causes his head to jut forward a little , his ears to lower, and his jaw to spring open; flipping it up returns the head and ears and jaw to their original position. (The packaging identifies this as his Mech Alive gimmick, but I don't think this is right. When you rotate his forelegs, you can see the gears turning in his upper legs; this is more consistent with the other Mech Alive designs and I believe this is the gimmick in question.)

Ravage may have posed a problem for Hasbro because, much like Scorponok from the 2007 movie, he doesn't have an overt vehicular transformation. When Hasbro produced a toy based on the Scorponok character, they invented a robot mode for him so that the toy would be marketable as part of the Transformers toy line, despite the fact that he never used this robot configuration on film. It seems a similar approach was taken with Ravage. In the movie, Ravage does assume a space travel configuration when he is dispatched by the orbiting Soundwave to the Earth below. Clearly, the focus for Hasbro was on the accuracy of Ravage's panther mode, since the toy's transformation—described as a "reentry mode" on the packaging—is a half-hearted reconfiguring of limbs rather than a true transformation. The skill level assigned to his transformation is three, an "advanced conversion," which is a reflection of the toy's price point only, and certainly not its complexity. The upshot of this is that while his alternate mode is fairly lame, his panther mode is very good, without any of the usual design limitations imposed on toys because of the way they transform. 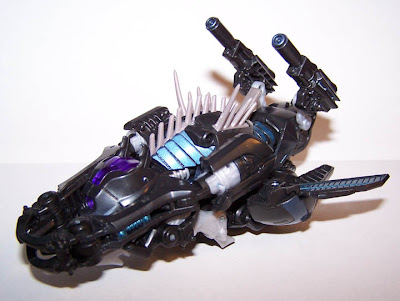 Transforming him essentially involves clasping his front paws together in front of his head to partly hide his face, folding his back legs and tail underneath him, and swinging out his chest panels to reveal some tiny little wings. The swing-open chest components are the only moving parts of the toy that seem to be there specifically for the transformation process; if it weren't for these parts I'd swear the toy wasn't actually designed to transform into anything at all. There are no landing struts or anything on which to balance the toy in vehicle mode, though at least it does hold together fairly well due to some strategically-placed pegs. His guns are independently positionable, with each of them attached to a pivoting mount that allows for a few different options. Just as Scorponok is pretty obviously a robot scorpion that's standing upright, though, Ravage is still pretty obviously a folded-up kitty cat.

Overall, Ravage is a pretty cool toy, particularly if you're a fan of the movie and want to own physical representations of the characters. He's arguably one of the all-time cutest incarnations of the character to date, with his one little puppy dog eye and adorable little chipmunk teeth. If you enjoy transformable robot toys because they're like miniature puzzles, though, Ravage will present absolutely no challenge; he's barely a Transformer in his own right. (Then again, he's still more complex than half the stand-me-up-and-swap-head toys that Hasbro has produced for Beast Wars and Beast Machines over the years, so I guess it's a give-and-take.)

Cute is not the word I would have used to describe RotF Ravage.

Also, the first Alternator Ravage, along with the Takara Beast Wars version, were primarily robots (admittedly with a panther mode in the case of the second example).

All said, a better transformation than TF Movie: Scorponok.

I was pretty disappointed with this toy. Even if he doesn't have a transformation in the movie, like Scorponok, giving him one would have made the toy much more interesting (turning his legs forward and pretending that's another mode does not count. At all.) I think the Action Masters proved that while not bothering with transformation means more accuracy fans of Transformers (the series about giant transforming robots, right?) do in fact prefer their Transformers action figures to, you know, transform. I honestly thought they'd gotten the point.

And while his legs are very articulated, that's about all that is. Can't move the head, can't raise the tail (though if you trust yourself enough, you can probably do a little trimming to the part of the tail that gets in the way... I say probably 'cause I *don't* trust myself enough.)

Transformers toys aren't supposed to be incapable of doing anything but sitting there looking pretty. It's the reason I buy them, out of all the things that have action figures.

However, if your master plan is to (someday when you can afford it) have one of every Ravage ever, well... one more down.