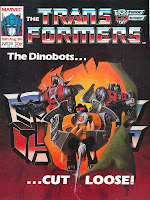 “In The National Interest” Part 1 was written by Simon Furman, penciled by Will Simpson, lettered by Annie Halfacree, coloured by John Burns and edited by Ian Rimmer.

The cover was by Alistair Pearson and is one of the more stylized efforts. The caption reads “The Dinobots ... cut loose!” (the exclamation point here making up for the lack of one in the title of the story) and the cover features Grimlock slicing through an Autobot logo that is drawn to look like part of the cover with his energo-sword. This gives the effect of the Dinobots slicing their way out of the very book itself! Grimlock is backed up by Slag and Sludge and all three are rendered with fairly close adherence to their toys, but sufficient liberties have been taken to make them lifelike and the resultant depictions are quite dramatic, although the main plot point of Part 1, that is, the Dinobots get bored of hanging around the Ark and wander off, doesn’t quite live up to the drama of the cover.

The issue opens with Joy Meadows, the journalist who found Sludge during the “Dinobot Hunt”, being interviewed on television. She tells the interviewer that she is going to expose the terrorist known as Robot-Master as a fraud. The television is being watched by the sinister operatives of Triple-I who, of course, are backing Donny Finkleberg as Robot-Master in order to conceal the fact that the there is an alien war going on in America that the government has no control over. If Meadows has filmed evidence their whole plan will be in jeopardy. With this in mind, Walter Barnett mentions that something called “Project Centurion” is nearing completion and that “one way or another, Joy Meadows must be silenced, permanently if necessary” this will be “In the national interest” of course, which marks the first in-story use of this extremely ominous justification.

The scene moves to a courtroom where Professor Morris is currently on trial for the murder of the security guard that he killed while in control of Swoop, way back in Issue #45. His lawyer is arguing his innocence, which is a bit strange, since Morris accepted his own guilt and turned himself in. Morris himself looks downcast and guilty at this, but for some reason does nothing to stop it. What does stop it, however, is a mob of balaclava-clad heavies bursting in with guns and kidnapping the professor.

Meanwhile, in the Ark, the Dinobots are growing tired of training in the confines of the spaceship. They have been ordered to remain there, after coming out of their comas in the previous issue, because their dinosaur forms are too conspicuous for them to roam about the countryside - an admittedly raw deal. Sludge bursts in, very excited, because he has seen Joy Meadows’ broadcast on TV.

The reporter is herself now driving along a cliff-road listening to a tape of a phone call that G.B Blackrock made to her, saying that he can’t point her at Robot-Master’s actual backers, but some “friends” at Mount St. Hilary will confirm her story. At that moment a blue car speeds up behinds her and shunts her vehicle towards the cliff leaving it teetering dangerously over the edge.

“Talk about your basic cliff-hanger” quips Joy to herself, calling out for help from the other driver. Unfortunately the other car turns out to be full of the same overalled thugs who snatched Morris, and they don’t look interested in helping, as they accuse her of “saying naughty things.”

Luckily, at that moment, the Dinobots are on the same road, having decided (shock!) to ignore their orders and go out on a jolly. They mean to look for Joy in order to help her with the story. Sludge is carrying an Olympic sized torch for the reporter, who looked after him while he was temp 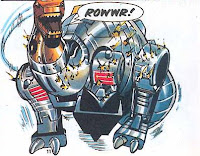 orarily mindless. Grimlock, however, decides to be uncharacteristically British and calls him a “great twerp”. The argument is cut short, however, when they sport Joy’s distress. Sludge immediately charges into action as machine-gun bullets bounce harmlessly off him. The men flee, but one manages to give Joy’s car the final shove. Sludge is dismayed, but luckily Swoop had anticipated the danger and managed to save Joy from certain death. Sludge pledges to defend her, nuzzling her hair, while Grimlock and Swoop look on in disgust.

Elsewhere, Professor Morris has been brought to a secret Triple-I laboratory where they have need of his expertise. He realizes they mean his robot-control machine and immediately refuses, although he is left speechless when he sees the towering figure of the new government-built robot - Centurion.

“In The National Interest” Part 1 is a great start to the story. Unusually for Furman, this one is a little more human-focussed, with the Dinobots being the only Cybertronians on display. I really like the way the threads come together here, both with the US book and with Furman’s previous stories. The idea that a reporter might have some evidence to embarrass Triple-I is a good story concept, and bringing back Joy Meadows as the object of Sludge’s affections is even more fun.

For a fun toy tie- in comic, “Transformers” is extraordinarily cynical about the way the American government manipulates its people and the media - although that is not a political statement - you get the impression that, with these writers, the same thing would happen anywhere in the world. It is not as immediately apparent as it might be, because the Transformers are, of course, the focus characters, but the whole Robot-Master plotline is thematically, if not tonally, a dark one and Furman kicks it into a higher-gear here with the government sponsored attempted murder of Joy Meadows. This, I could not help feeling, was a far cry from the Autobots teaming up with the United States’ military from Michael Bay’s movies.

The plot is fairly full for the eleven pages. It is very nice to see both Joy Meadows and Professor Morris again and the giant looming figure of Centurion makes for an excellent cliff-hanger. One thing that doesn’t appear to make sense, as well as Morris’ innocent plea, is why Triple-I need him to operate his machine. They have rebuilt it without him, but need him to use it. Presumably it is somehow keyed to his mind. but this is not mentioned in the script.

The characterization is very good throughout. Joy Meadows is instantly likeable and Sludge’s crush on her is very endearing, as is Grimlock’s disgusted reaction. This is all very much in character for the highly idiosyncratic Dinobots and somehow all the more adorable when they’re talking about it in their dinosaur modes. Morris gets little to say, but is a haunted man, looking grim as he appears to be about to be acquitted and is distraught at the idea that he might become addicted to his machine again. The Triple-I brass are suitably shadowy and evil, which is paradoxical, because they are SO evil that in some ways it takes some of the sting out of the storyline, whereas it should really make it all the more terrifying. Their anonymous boiler-suited thugs are more sinister than any Decepticons because they are clearly men, acting in secret against their own kind. At least the Decepticons are clear (despite their group-name) about their intentions, and are alien enough for us to not take them as seriously. “In The National Interest” should not be a sinister title, but in this case, it shows us a world, probably not too far from the truth, where people make decisions for the “National Interest” at the cost of innocent lives, and, perhaps even more frighteningly, seemingly accountable to nobody. The really scary thing is that, as readers, we do not find this the least bit unbelievable.

While I have made no secret of disliking Will Simpson’s art in the past, I have also never denied the fact that he excels at drawing believable humans, and, since this issue is full of humans, the art is pretty decent. Particularly striking, aside from the humans, is the design of Centurion, who is big and powerful enough to make an effective image, but, to a regular reader, obviously not a Cybertronian. This is very important, because he will obviously get involved in 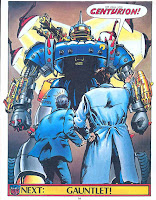 the robot fights in future issues, but has to stand apart. It’s a difficult balance to strike - a design that’s not Cybertronian, but that a panic-stricken Earthling would not differentiate, and I think Simpson has managed it very effectively. His Autobots do not bug me as much as usual, either, because the only ones on display are the Dinobots, who are often in dinosaur mode anyway, and Grimlock, who does much of the talking, does not have a mouth. For some reason it is robots with humanoid facial features that Simpson cannot easily do and he does not have to here.

I really like "In The National Interest" and I highly recommend that people seek it out. It's available for purchase from IDW as part of  Transformers: Best of the UK - Dinobots

s. I very much look forward to reviewing the final three parts of this mini-epic.
Posted by Bishbot at 3:55 PM

I'd say this story begins the golden run of the UK comic - lasting until The Legacy of Unicron or thereabouts. Looking forward to re-living all those issues.

Although I find the cover a bit strange - Grimlock looks like he's anointing someone with his sword, rather than cutting loose from the page. I think the same conceit was much better executed when the comic took on G.I. Joe (around issue 150), with Hawk and Snake Eyes bursting from the cover.

I did love this storyline, but i must confess, to my tween mind, i found Joy Meadows EXTREMELY attractive as a kid, so that's probably why this storyline stood out to me. The part where she is trying to get on the other side of the crashed car and the gunmen saying she said naughty things always seemed...interesting to me. But i really digress-i did find it odd that Sludge had a crush on a human though-that never seemed to ring true to me