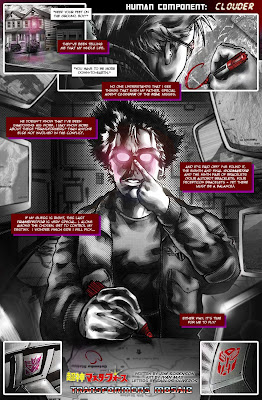 My first Mosaic piece went out today. As long-time readers of this blog no doubt know, I'm a big fan of the art of fan artist Iván Mas. That's why I decided to collaborate with Iván and Synapse (AKA Carlos Oliveros) on their ongoing 'Human Component' series of mosaics. The first piece in the series was Minerva; look for more in the future.

Basically, 'Human Component' seeks to get into the heads of the 15 men and women of the Masterforce conflict. With Clouder, I felt that the core of his character was his moral dilemma and wanted to touch on why he might choose, initially, to side with the Destrons without hitting the reader over the head.

It's also interesting that, of the folks in Masterforce, he's the only character who actively seeks to get involved in the conflict. Everyone else was recruited by outside forces. I think there is a reason for that, too. Note that the Masterforce Bracelets come pre-adorned with a faction sigil on them. Basically, the Road King transtector was always destined to fall into the hands of someone noble of heart and pure of spirit. Likewise, the Overlord transtector, a pair of Destron bodies, needed to find people ruthless enough to use it. But the Clouder transtector has within it the potential to serve with either side. I think, in a sense, this Transtector needed to fall into the hands of someone outside of the conflict, someone who could approach both sides and then choose for himself.

On a side note, I've seen some evidence recently that suggests that early drafts of Masterforce had TWO humans for Doubleclouder, just as Overlord does. Certainly, with two Godmaster figures, that would have been the more obvious direction to go. I suppose that the human Godmaster components would have battled it out for Doubleclouder's spark. That could have been fun, but putting both sets of armor in one person's hands I think allowed them to tell some interesting stories and explore some interesting themes.

Let me know what you think! If you like it, I've got a few more one-page stories to tell ...
Posted by Jimtron at 7:46 AM

The third paragraph of this post was an interesting and PLEASANT read. I had never thought of that :)

Also, when you talk about "evidence"... you evil man! Did you find early concept art, a script draft, anything???

And of course we're both more than willing to work with you again ;)
Best,