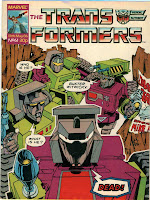 “Devastation Derby!” Part 1 was scripted by Simon Furman, drawn by Will Simpson, coloured by John Burns, lettered by Mike Scott and edited by Ian Rimmer. The cover was by Will Simpson.

I like this cover for the simple reason that the Constructions are rarely highlighted in their individual forms. There have lots of Devastator covers and splash pages over the years, but few that star his component parts. In all, the cover shows four of the six Constructicons, Scrapper, Bonecrusher, Mixmaster and Long Haul. Scrapper, in particular, looks very threatening and shadowy. Simpson, as is still his way, even after most of the other artists have moved onto using the animation models, has based these characters very much on the toys that represent them, but he manages to prevent them from looking stiff or unnatural, and in fact imbues them quite effectively with menace. My two complaints are that the colouring is rather flat and uninspiring, I am used to better from the UK comic, and that the speech bubbles are unnecessary and rather spoil a pretty cool image. A fairly decent cover, but not a classic.

We start off with Devastator smashing some derelict cars, as part of a training exercise devised by Soundwave. As they separate, Soundwave tells the Constructicons that they are improving, and that they will soon smash the Autobots. As he is talking, Longhaul spots Shockwave heading towards them in Space-Gun mode. Soundwave immediately goes into cringing subordinate mode, but Shockwave is not interested, order

ing him to send the Constructicons to the nearest human settlement in order to grab a particular human. Soundwave is aghast that Devastator be used for such a trivial task, but Shockwave silences him, telling him that this human can be used against the Autobots. This human is Buster Witwicky!

We cut to night at the Witwicky residence. Buster wakes, screaming, from a nightmare. Sparkplug goes in to see if he is ok and is surprised to discover that his son has drawn a picture of a giant robot on the back of his door, seemingly in his sleep.

The next day Buster is distracted and moody but is eventually persuaded to go to the annual demolition derby with his girlfriend, Jessie. As they leave, Sparkplug has a thought and decides to take Buster’s robot drawing to the Autobots. Optimus Prime muses that while the drawing is crude, the design of the robot is of “great sophistication”. Wheeljack concludes that it is an “amalgam model” something he has been trying to perfect for some time, and something that the Decepticons already have, in the form of Devastator. No-one can explain why Buster would have drawn this in his sleep, however, and his recent encounter with Shockwave seems by-the-by.

Sparkplug, however, is concerned that Shockwave might try to hurt Buster again, and, while Optimus Prime thinks it is unlikely that the Decepticon would bother with one human, agrees to send Smokescreen and three other Autobots to the demolition derby in order to keep and eye on him.

Meanwhile, Buster and Jessie are enjoying the event. Smokescreen, too, seems fascinated by this form of “gladiatorial combat.” There is a cute bit of slapstick comedy as Sparkplug asks who the “quiet” guys driving the other Autobots are. Smokescreen tells him that they are “facsimile constructs” hidden in their seats, and that he has one too, offering to show Sparkplug. The human gives a grunt of pain, obviously having been hit in the back by Smokescreen’s driver.

Smokescreen, meanwhile, apologises to Sparkplug for forgetting that he had climbed back into his seat, but then, without a second thought, or listening to Sparkplug, decides that he ought to take part in the derby! Ironhide calls him an “impetuous youngster” as they were trying to keep a low profile and Tracks gets a fun bit of characterisation as the very thought of risking his bodywork in such an event horrifies him. While they complain, however, Brawn has spotted something more important - Decepticons! 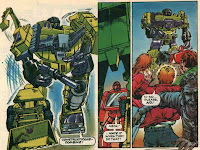 The Constructicons are terrorising the local humans, looking for Buster. Ironhide orders Brawn to protect the boy while he transforms and charges into battle, calling for Tracks and Smokescreen. It turns out that the Constructicons have standing orders should any Autobots interfere - they immediately unite into Devastator. Ironhide, understandably, hates it when they do that. On seeing the gigantic merged robot, Buster cries out, clutches his head, and suffers some kind of fit, while Jessie cries over his unconscious form.

This wasn’t a bad outing for Part 1 of a story. Certainly Buster’s dreams and the mysterious robot that he has drawn are the most interesting part of the plot, while the return of Devastator provides a bit of action at the issue’s close. I have never really thought of Smokescreen as an “impetuous youngster” but he doesn’t feature very heavily in the comics in general, so it is difficult to say that he is mis-characterised here.

I have got to say, at this stage, that I’m not really a fan of Will Simpson’s art in this i

ssue. It really feels like something of a throwback to the earlier parts of the UK comic, especially with Prime looking so stiff and toy-like and Smokescreen so gangly. The Devastator splash page that opens the issue is, however, pretty good, although would have been even better if it had used the far superior cartoon model over that of the toy. The colouring is a bit different as well - Devastator is a much murkier green than he should be - the Constructicons on the cover are a much better example, although I do like the jumbly image of Devastator coming together on the last page.

All in all, there’s not a lot to say. “Devastation Derby!“ appears, so far, to be an average story with average art. However, Part 1 was always going to be set up, and given that, to a fan, the identity of the robot in Buster’s drawing is obvious, Part 2 looks like it might get interesting. As a sidenote, it appears, from trailers at least, that revisiting this Buster scenario just before the release of “Revenge Of The Fallen” might make for interesting reading, as there definitely appear to be some parallels to Sam’s arc in the new movie.

Devastation Derby! is available from Amazon as a part of the Titan book: Transformers: Second Generation

I liked the story, but never liked the cover of this issue. The eyes on the Constructicons always looked weird and cartoony (in a bad way) to me