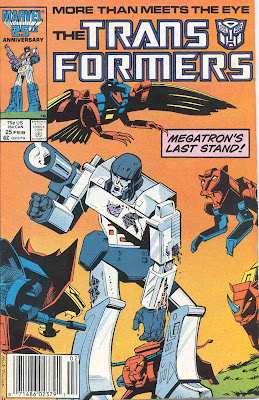 Gone but Not Forgotten! is the twenty-fifth issue of the US G1 Marvel comics run. It was penned by Bob Budiansky, drawn by Don Perlin, Inked by Ian Akin & Brian Garvey, colored by Nel Yomtov and lettered by Janice Chiang. The cover was a Herb Trimpe.

It's a decent cover, all told. Megatron, battered and
beaten, faces off against the Predacons. There's just a bit of grass to suggest the ground, but mostly it's a plain orange background. "Megatron's Last Stand", we're promised. Rampage is a little off. Megatron has some weird perspective things going on with him, but the injuries are pretty neat.

The book starts out with some soldiers advancing on the Decepticon's coal-mine base. Walter Barnett helps to guide the attack, having finally sanctioned it. The Decepticons, meanwhile, are preparing to abandon the base. With the Hydrothermocline in their posession, they need a coastal base. With a nod to the G.I. Joe series, Shockwave and Soundwave prepare to transport the device to the Florida Keys. However, when Laserbeak arrives with news of the impending assault by the U.S. Army, they have to stop preparation to inform Megatron of the news.

Megatron sits despondently in a throne made of some destroyed cars. He's not interested in fleshlings, only Optimus Prime. Brawl makes the mistake of pointing out that Prime died in the last issue and gets his head crushed for the trouble. Witnessing this, Shockwave realizes that he has no choice but to remove Megatron from command. He begins by needling Megatron, suggesting that perhaps Prime's death was in fact a computer simulation. This prompts Megatron to fly into such a rage as to begin hurtling firepower all over the place. In fact, this random barrage prompts the army to retreat. As the Decepticons embark on their journey to their new base, Shockwave contacts Razorclaw with a disk of instructions. Phase two of Shockwave's plan is for the Predacons to hunt Megatron. 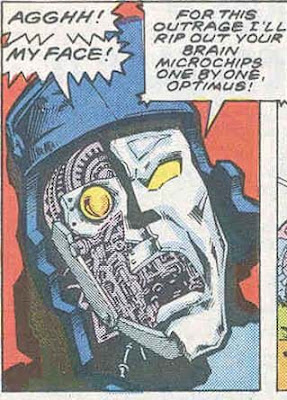 Megatron seems to be getting worse. When he spots a human truck, he mistakes it for Optimus Prime and blasts it to pieces. Sensing the presence of his nemesis, Megatron sends his ride, Dead End, away and awaits Optimus. What he gets is a face full of Predacons! They're wearing Autobot symbols, to prey on Megatron's sense that Optimus Prime is behind it all.

Buckethead takes some great injuries, including getting his gun barrel torn off by Divebomb, his side punctured by Headstrong, and half his face torn off by Razorclaw. Still, he survives their initial assault and rallies. Realizing that their quarry had seized the initiative, the Predacons unite and attempt to face off against Megatron one-on-one. Megatron triumphs, barely, and soon Soundwave finds the disk containing Shockwave's instructions. As Megatron prepares to blast the traitor for giving Predaking those orders, Shockwave points out that he did not merely give orders, he encoded major portions of his personality onto that disk. Megatron, pushed to the edge, makes a final, fatal inference. He realizes that Optimus Prime himself survives, albeit as a computer disk, and freaks out. While on the space bridge, he fires his fusion cannon and hits the structure. There is a huge explosion, and when the dust settles bridge and Megatron are nowhere to be seen. Soundwave congratulates Shockwave for destroying Megatron, though Shockwave clarrifies that it was in fact a memory that destroyed his rival.

The book was somewhat disappointing. Issue 24 featured the demise of Optimus Prime (as well as the introduction of the Protectabots and Combaticons), this issue features the death of Megatron (and the introduction of the Predacons). For the exit of such major characters to be diluted by the introduction of new ones seems like quite a shame. I can see what Bob was going for - he wanted the characteristics that make Prime and Megatron great to bring about their downfall. For Optimus, it was his sense of self-sacrifice, even for characters in a video game; For Megatron, it was his madness and obsession. Despite that, it's not very satisfying. Having seen Optimus and Megatron battle to the death in The Transformers: The Movie earlier in the same year, this exit seems anticlimactic.

There were some strong points in this issue as well. Shockwave was in top form, pulling the strings to bring about Megatron's suicide. The artwork was some of Perlin's best. In addition to the aforementioned injures that Megatron sustained, it was fun to see Perlin's depiction of him cutting loose with his firepower. The Predacons were nicely fluid, and Brawl's apparent death (don't worry, he'll be back) was terrific.

All said, it's quite necessary to the Marvel comics continuity, and readable, but underwhelming given the potential emotional weight of what happens. Gone but Not Forgotten! is available for sale from IDW Publishing as part of  Classic Transformers Volume 2

What i remember about this issue is that it has the most dialogue changes in the UK issue to the US one. Since Megatron met the Predacons before in the UK, this had to be explained, as well as the GI Joe references were replaced