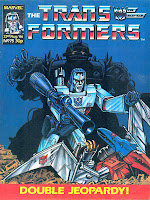 “In The National Interest” Part 2 was written by Simon Furman, pencilled by Will Simpson, inked by Dave Hine, lettered by Anne Halfacree, coloured by John Burns and edited by Ian Rimmer.

The cover was by John Stokes and is a mixed bag. It depicts Megatron menacing a downed Swoop with his fusion cannon while the menacing form of Centurion lurks in the background. Swoop’s panic in Pterodactyl mode is well realised and I really like the hulking Centurion silhouette, but by this point artists should really have stopped looking to Megatron’s really rather awkward toy version for inspiration. Stokes stops short of drawing a trigger in Megatron’s crotch but his fusion canon is still very obviously his sight in gun-mode and his body is needlessly blocky. His head is certainly a Megatron type design, but far flatter and less elegant than the cartoon model. Shortly after this story Geoff Senior would give us a Megatron we can believe in in “Victory!” and we have seen good examples prior to this but in general, Megatron’s aesthetic appearance in the UK comic has so far been very disappointing.

The issue begins in the middle of a news report from Portland, Oregon. The reporter talks of an outbreak of robotic violence and how the country appears to be in the middle of a full-scale war. There are wrecked cars in the background and police officers standing around.

We cut to four hours earlier where Grimlock is telling Joy Meadows about the Autobot/Decepticon conflict. The Dinobots make it clear to her that Robot Master is not affiliated with either side and that Optimus Prime thinks he might be a puppet of the government. It does not take Joy long to see the plausibility of this scenario, although she doesn’t express the enormity of it quite as much as one might expect. Then again, she has taken meeting robot-dinosaur-aliens in her stride with remarkable aplomb. Joy Meadows is a strong woman and Sludge has a strong crush on her. Simpson do 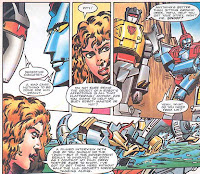 es some lovely character work here in depicting Sludge’s dopey adoring stare. Grimlock and Swoop are thoroughly amused by their comrade’s behaviour (after all, Grimlock not kisser, he king!). Joy is a little ungrateful here, saying that she’s “not sure being the object of a robot’s affections is all that flattering.” I think it’s very flattering indeed. He’s got a crush on her and they aren’t even the same species! While they all agree to break the story of Robot Master’s fakery there is another cute little vignette showing Slag and Snarl playfully frolicking in the surf. Will Simpson’s Dinobots are adorable! Joy needs her camera crew so Swoop agrees to air-lift them to her, evading U.S. security on the way.

Meanwhile, the Decepticons are still looking for Meadows. They need the Robot Master con to continue as long as possible to prevent the public finding out the truth behind the war and siding wit

h the Autobots. Megatron rants for a bit before Soundwave reports that contact has been made. Since this is Will Simpson and Megatron is a robot with eyes, a nose and a mouth, it goes without saying that he looks awful in these and subsequent panels.

Elsewhere, Triple-I have somehow forced Professor Morris back into his robot-controlling chair. He doesn’t want to, but the man with him, Grady, insists. He tells Morris that they removed evidence of his guilt from the crime-scene, explaining why he was about to be acquitted. Except, this doesn’t explain that at all. Morris killed the security guard with Swoop, who is clearly long gone, and it still went to trial. He also presumably entered a guilty plea, and would have been at the very least charged with “filing a false police report” long before it ever became a murder trial. Once at the murder trial he would certainly have either been either charged with the murder or, if he was not believed, institutionalised. If the latter had occurred he would have remained in confinement for a long time, constantly pleading his guilt, even in the face of no admissible evidence. If Morris was not planning to do this, and in fact was going to let the court let him go with no charge, then his contrition at the end of “Icarus Theory” was entirely false and he is not the noble character that the story wants him to be. Since the point of the character is his inherent goodness following the events of “Icarus Theory” then I am forced to conclude that the legal proceedings on display here are unfortunately ludicrous. Why Furman did not simply have Triple-I kidnap Morris in order to save him from a guilty verdict is anyone’s guess. It would have been simpler and given what happens to the character, worked just as well.

Anyway, that aside, Morris looks up partly in awe and partly in terror as his mind makes contact with the metal colossus that is Centurion.
Joy’s camera team are waiting to meet her “contact” in Portland. The more perceptive of the two looks out of their van windscreen at Mixmaster, in vehicle mode, and mentions that they are being watched. Mixmaster spots them and tells Megatron, who is laying on his seat in gun mode. Megatron flies from the vehicle and transforms, straddling the TV van. One of the men flees the van and Megatron grabs hold of him.

Swoop watches this from the top of a building. Wryly observing that he did want some excitement, he plunges into the fray. Megatron drops the human, but manages to wrestle the Dinobot to the ground, smashing him into a building.

The Triple-I agent on the scene calls frantically for Centurion in case the film crew get away in the confusion. Centurion bursts from the ground as we see Professor Morris once more in the rapture of robot control. “The fear is gone“, we are told, “He is Professor Morris no longer, he is Centurion!” He strikes Megatron just as he Decepticon leader is about to finish off Swoop and the two of them fall to fighting. The film crew cower behind their van, figuring out that Swoop was Joy’s ally, and aghast at seeing him unconscious in a pile of bricks. “Main Street, Portland, 4:29pm, and the city SCREAMS!”

This issue does not quite have the thematic heft of Part 1 but this is out of necessity. Part 1 put the pieces into place and now Furman has to begin knocking them over. The characterisation of the Dinobots is, as ever, spot on and Megatron is certainly suitably megalomaniacal. It is left to later issues to determine whether Morris’ control of Centurion is a triumph or a sad tale of his mental breakdown, but the reader can certainly thrill to his robotic avatar’s raw power - having him burst from the ground in the middle of the street is a master-stroke of staging and we see the battle with Megatron from the perspective of the tiny humans, which is something I always approve of. After all, since a lot of Transformer battles take place in urban settings, we need to see the people they affect. In this case the camera crew are front and centre. Next issue we are promised “Holocaust!” I certainly cannot wait to see what happens to Portland as these two titans continue to clash.

Simpson’s art is as good and bad as ever. Humans and Dinobots are rendered excellently, but Megatron is really quite poor, although this is not

a problem limited to Simpson’s work. The colouring is absolutely fine, with no mistakes, although Megatron is more silver than he usually is (the toy again), but there are no standout choices.

A decent issue with a goodly amount of plot and exciting action. The cliffhanger is a good one and appears to set up an exciting back half for this story. In the National Interest is available for sale from IDW as part of  Transformers: Best of the UK - Dinobots

Hello, I am really enjoying reading this blog since finding it a couple of weeks ago. I agree that Will Simpson's robot Dinobots were great, but I hated when he tried to draw robot faces - they alwasy had bizarre mouths!!

I'm very much a G1 fan and don't care much for the Beast Wars etc, and I think the live action movies have been dreadful!

I am hoping I could get some advice about the best place on the internet to buy/sell original Transformers comic art?

A few years ago my sister gave me a couple of the original pages from UK issue No 64 as a birthday present.

It was a very thoughtful gift, but I would ideally really like to acquire pages drawn by either Andy Wildman or Geoff Senior instead.

Is there a trading forum or similar which I can visit? (From reading his blog I know Andy has already sold most of his G1 pages.)

Any tips would be great

Keep up the great work

Hi jim. Cool review. You got any tips on how I can do more Transformers stuff on my blog? Am doing comic reviews and the movie but need something more. Can't review old comics cos' i don't have any. Any ideas?

John D - I'm not sure about any trading forums for original art. I've got quite a few pieces myself, but most I've gotten from ebay or at conventions. Sorry I can't be more help.

Fantom - Actually, this review was from guest-blogger Bish, so you should be congratulating him. As for transformers content, the first thing that leaps to mind is reviews. You can review television episodes, toys, merchandise ... whatever strikes your fancy and you have relatively easy access to. If you have any creative talents (writing, drawing, whatever) you can also put up some regular unique content. Of course, if you want to do something regular (once a week), you're welcome to do it here. Feel free to drop me an email if you're interested in discussing some ideas.