Review: War of the Worlds, the series ep 2 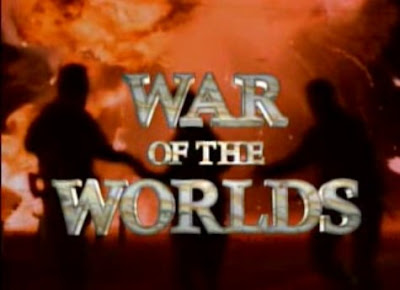 War of the Worlds, the series began with a two hour pilot that gave a broad sketch of the world. It falls to the second episode, though, to set the pace for the average episode. The Walls of Jericho, in essence, establishes the formula for the series.

For the first time, we see the opening credits for season one. "In 1953 Earth experienced a War of the Worlds. Common bacteria stopped the aliens, but it didn't kill them. Instead, the aliens lapsed into a deep state of hibernation. Now the aliens have been resurrected, more terrifying than before. In 1953, aliens started taking over the world; today, they're taking over our bodies!" Appropriate images are juxtaposed with this dialogue, showing some carnage from the movie before moving on to images from the pilot. We then get a very 80's montage of our main characters being vaguely actionish. Except for poor Norton Drake, he's pretty much sedentary. In a bit of a cheat, they climax with the heroes running away from the war machines from the end of the pilot. It's undoubtedly a highlight of the season, though a bit misleading since we'll never see them again. The credits get the job done, but they aren't particularly inventive.

The episode itself isn't 100% in-line with the formula for the episodes yet to come, but it's pretty close. It's been six weeks since the defeat of the aliens at Hanger 15, and the team hasn't heard a peep from them. This prompts General Wilson to contemplate a declaration of "Mission Accomplished" and sending our team home. The Colonel doesn't seem unhappy with this prospect, though the rest of the team thinks the call premature. They feel betrayed that Ironhorse shared with Wilson data indicating that the radiation that kills off alien-incapacitating bacteria is ultimately fatal to them. 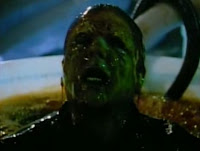 The aliens, meanwhile, attempt to deal with the killing heat of the radiation. The Advocacy is literally rotting away, as are many of their minions. Blood baths (literally, baths of bovine blood) help slow the process, but not reverse it. A plan to steal special plastics to build cooling suits is successfully executed, though an initial attempt to steal liquid nitrogen from a rocket base results in an alien fatality. The team, in the process of packing, puts together the attempted theft of the liquid nitrogen and the plastic and the radiation heat and realizes a probable alien target - Jericho Refrigeration, Inc.

Blackwood and Ironhorse go undercover to the plant, posing as members of the Department of Health and Safety. They quickly realize that folks are acting strange and that radiation levels are way too high. They return that night, with Wilson and McCullough, to plant a homing beacon on a delivery truck and trace the aliens back to their lair. Unfortunately, they are spotted and engage the aliens in a pitched battle. Things go well for our heroes, partially because only three of the twelve aliens spotted actually fight. What happened to the other nine isn't clear. The General blows up the truck as it flees, which kind of defeats the purpose of the mission, but convinces him to allow our heroes to continue their mission.

The Advocacy, now ensconced in their coolant suits, laments the loss of the plant, but observe that they've already got enough coolant to see their invasion through to the end. "TO LIFE IMMORTAL" they declare as the credits roll. 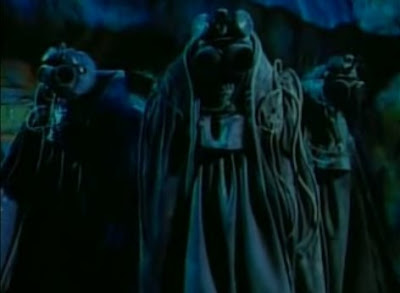 The Good: The Advocacy. The leadership of the aliens continues to prove one of the most interesting aspects of the show. They refuse to contact the council until they have good news to report, wishing to report only of victory. When one of the three succumbs to the radiation heat and must be submerged in the tanks, they lament that there may not be three other worthy candidates to take their place. This is also the first episode that they will mutter the alien's memorable catch phrase, "to life immortal," though in the pilot they do express a longing "to live life immortal."

The use of the alien's hand as a third appendage with which to fight. This would be used many times in the first season, but it's first used in the fight at Jericho Refrigeration. I love the imagery of the alien arm bursting from the stomach of the hapless hosts.

A scene in the Jericho Refrigeration plant when a woman comes to ask her husband why he hasn't been home in days. "I've been working," he calmly replies. "Who is she," she hysterically demands. "I've been working," he reiterates. She then demands a divorce, which prompts another alien to move to her and assure her that, "he's been working." The alien workers stare at her and Ironhorse and Blackwood realize that things here are very wrong. It was a nicely creepy scene.

Biblical allusions (but see below). The title of the episode, The Walls of Jericho, references the book of Joshua, sixth book of the Old Testament of the Bible. The story is of the conquest of the city of Jericho by Joshua and the Israeli army, wherein the walls of the besieged city crumble allowing the slaughter of the inhabitants within. The imagery involves a mighty fortress crumbling due to divine intervention, though it's difficult to see exactly how that applies to the episode. After seeing this title, one can't help but revisit the title of the pilot (The Resurrection) with new eyes.

John Vernon's performance as General Wilson. Certainly, any genre fan has seen or heard him in numerous roles including Doctor Strange, Rupert Thorne, General 'Thunderbolt' Ross and Doctor Doom. He's wonderfully charming as he subtly brings around the idea of evicting the team from The Cottage, and almost manages to sell the very shaky 'selective amnesia' theory. Almost.

The Bad: The very shaky 'selective amnesia' theory. It is mentioned for the first time here that many people who have encounters with aliens simply forget, possibly because of something mesmerizing about them, possibly because of our own subconscious desire to not experience these kind of horrors, most likely a mixture of both. It's a weak explanation for allowing the extras to be incredulous about the existence of aliens and smacks of lazing writing. Which brings us to ...

The writer of the episode, one 'Forrest van Buren.' The pseudonym indicates that this episode was written by a scab during the writer's strike of 1988. Bad, scab, bad! 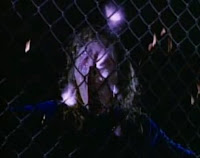 Reusing a scene from the pilot. Specifically, when an alien runs into an electric fence at a facility making rocket fuel and melts, the shot of her remains is the exact same shot as the image I used of an alien body from the pilot. Her face melting against the fence was a pretty cool and gruesome image, though.

The acting. Leaving aside Philip Akin (I'm not going to blast him week after week), the extras playing the cops who investigate the plastic factory and the farmer and sheriff discussing the cows drained of blood were really off.

Our heroes going undercover. While this would be a standard device throughout the series, it never quite gelled for me. They are legitimate government operatives, so they shouldn't have to engage in this level of subterfuge. It's a bit overlookable for now, since they were on the verge of having their funding cut, but it's a trope that would be employed time and again.

Forced Biblical allusions. Don't get me wrong, I like the Bible-inspired titles. But to justify this title, both the refrigeration plant and the rocket base have the name Jericho in them. Also, the fort where alien bodies were stored in the pilot was Fort Jericho. It's a bit much. 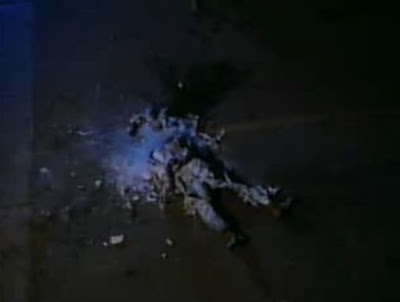 The Ugly: If ever there was a show that lends itself to this style of analysis, War of the Worlds is it. I'm tempted to go with the scab-covered Advocates, especially once one of their numbers is immersed in cow blood. The face-melting electric-fence killed alien is another good candidate. But the real ugliness of the episode would probably be the alien who gets sprayed with two canisters of liquid nitrogen and shattered. Aliens normally dissolve into a gooey mess, but this takes things up a notch - bam!

Overall, a fairly representative episode, one that fits the last few pieces of the puzzle left over from the pilot in place. Both the virtues and the flaws of the series are apparent. I'd say the virtues outweigh the flaws ... but not by a huge margin.  War of the Worlds - The Complete First Season

remains readily available on DVD from Amazon.com.
Posted by Jimtron at 6:36 PM

I remember loving "The Resurrection" when it aired, and then being really worried when I watched this episode.

I like the early relationship between Ironhorse and Blackwood. In this episode in particular, it seems to be what may have even inspired the Mulder / Skully dynamic (in fact, I think it can be argued that the X-Files owes a lot to S1 of WOTW). Harrison is the "believer" and Ironhorse is just in a hurry to debunk the whole thing and get out of Dodge.

I think this show has the biggest collection of weird-looking extras ever. I mean, unless the person was a primary guest star, the guest actors are the most unattractive, weird looking bunch of people ever.

2/5 stars for this episode.

The amnesia thing was a can of worms they didn't need to open or call attention to, and it makes no sense for them to have done so. In the novelization of the pilot, people remember the invasion but it's so scary that they don't want to even mention it. The best example of that is someone says to Ironhorse, "Ever since 53 all the drunks see aliens instead of pink elephants" On top of that, General Wilson has very clear memories of Clayton Forrester and what the military did with the alien remains. Suzanne also is able to perform an autopsy on an alien that was frozen and kept in a freezer. This frozen alien was carted out on Halloween to scare neighborhood children. Norton's parents were killed in the invasion as well as Harrison's, and they were specifically looking for the aliens before the resurrection. By making an issue of this "memory loss" so early on in the series the writers really planted an unnecessary seed that hurt the first season.