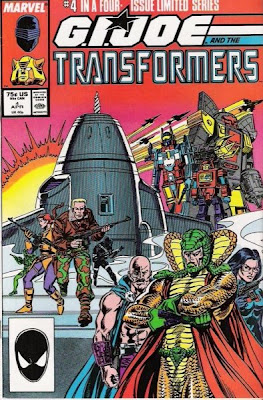 ...All Fall Down! (HUZZAH!! EXCLAMATION POINT CITY!) is the fourth and final part of the G.I. Joe and the Transformers limited series. It is not to be confused with
issue #66 of the Marvel ongoing G1 series, All Fall Down. (You gotta love comic titles that are only differentiated by punctuation.)

The series had a consistent creative team throughout. Michael Higgins was the writer, Herb Trimpe the penciler, Vince Colletta the inker, Nel Yomtov the colorist, and Joe Rosen the Letterer. I'm not sure who did the cover, since it's not signed.

The cover is a bit busy for my tastes. There is no real focus - Alpha sits in the middle of the page, with the Autobots to the upper left, Cobra to the lower right, and the Joe team to the lower left. There are some jets flying, having perhaps just finished bombing something, but it's not clear to me if they're Cobra, Joe, Decepticon or even Aerialbot. OK, probably not Aerialbot, Superion is among the Autobots. The Decepticons are only really represented by Alpha, which might have worked better if there was a mighty Decepticon symbol on it. On a symbolic level it doesn't work either, since these three teams are nominal allies for the span of this issue, but that doesn't come across either.

The issue is only slightly less muddled. Power Station Alpha begins to execute Shockwave's plan to destabilize the structure of the Earth, allowing the Decepticons to collect the enormous energies released by its destruction. The Autobots, Cobra and G.I. Joe aren't too happy about this, huddled up inside the Ark. They begin to devise a plan, but it's obvious from the beginning that this alliance is not meant to last. The Autobots are concerned that Alpha has been modified enough to be considered a sentient being, hampering their effectiveness. Neither the Joes nor the Cobras are too impressed by this argument, but the Joes worry about the consequences of blowing up a nuclear power plant over a populated area. Quite pragmatically, Cobra points out that if they don't act soon, these concerns will be moot.

I like this exchange, actually. The Joes live in a world with more shades-of-gray than the Autobots seem to inhabit. I'm sure the Autobots aren't keen to spread radioactive fallout around, but they naively don't even seem to realize that this might be a problem. I suppose Transformers have better shielding. The Joes, on the other hand, are perfectly willing to sacrifice a possible sentient being to save billions, which really is quite sensible. The ever-Machiavellian Cobra will take any steps necessary to save the Earth.

Shockwave, meanwhile, has sprung his plan and sees no reason to keep Mindbender around. Bombshell is dispatched to take out the human, but the Baroness shows up with a bazooka and takes out the Insecticon. As the pair of terrorists flee, Mindbender stops to pick up Bombshell, now in tiny insect form. After 25-odd issues of Transformers being virtually impervious to anything a human can dish out, Circuit Breaker excepted, this is the third time that we've seen a Transformer defeated by a human in four issues. It's a bit jarring, all told. Moreover, Bumblebee was taken down by an army and Dirge had his own weapon turned against him. Bombshell here is defeated by a mere hand-held cannon.

Speaking of Transformers defeated by humans, Bumblebee is in the final phase of his resurrection. Ratchet arrives at the Joe base in time to help finish the job. The Joe team, though, didn't quite know Bumblebee's original specs; consequently, he is now in his Goldbug character model. He requests a name upgrade, to be taken more seriously. It's a decent explanation for his new body, though I prefer the alternate explanation that the UK folks would get. (Since they didn't get the Joe / TF crossover till years later, an alternate explanation involving Death's Head and Wreck-Gar was concocted.)

The final offensive begins! The Autobots, G.I. Joe and Cobra launch an all-out offensive on the Decepticon base to keep the Decepticons occupied. Meanwhile, Goldbug, the Baroness and Scarlett are to plant explosives on Alpha to be used if necessary. We get a nice gestalt battle between Superion and Devastator as the battle rages. Mindbender uses the captured Cerebro-shell and his own mind-control gear to seize control of Alpha and direct it into a low orbit. This prompts the Baroness to activate the explosives without authorization. With their mutual enemy defeated, Cobra wastes no time in withdrawing. The Baroness, though, has another mission.

I like that Cobra was the real savior of the human race here. Thematically, it wasn't the force of their arms that they brought to the table, it was their ruthlessness. I do think that the idea of holding off on Alpha's destruction because it might be sentient was pretty silly, but it's the sort of silliness that the Autobots love. I also like the idea of the same cerebro-shell that helped Bombshell take control of Alpha in the first place being used to wrest control away from the Decepticons.

Hawk watches regretfully as Barbara Larkin is arrested. He then gets to witness the Senator's assassination by a Cobra operative. The Baroness has tied up the last loose end. Anthony Duranti, though, seems to have fully recovered. Even brain surgery is no match for the resilliancy of youth. The Autobots direct the Joes to leave the Decepticons to them in the future, with Blaster not quite sure if the Joes were in on the destruction of Alpha or not.

The Duranti plot works for me, the Larkin one does not. Larkin's plan was, build a powerstation cheaply to funnel funds to her state, then have Cobra blow it up. Cobra tries to steal it instead, but the Decepticons actually DO steal it. So ... why did Larkin have to die exactly? Because she could, what, identify the Baroness? They had photos of the Baroness. This whole emotional arc sufferes from being poorly planned. Anthony, though, seems like a good proxy for the collateral damage in the Autobot-Decepticon war. To me, he represents one of Higgins' most sucessful contributions to the Transformers mythos.

Trimpe's art continues to work moderately well. His battle royale was a high point of the episode, and he drew Bombshell's convulsions (when the Cerebro-shell was prodded) convincingly. His expressive humans helped sell some of the Joe / Cobra conflict, and gave Duke some genuine sorrow.

As a four issue story, G.I. Joe and the Transformers offers up what it promises. We get to see most reasonable permutations of alliances played out, which was probably the real point. (The Autobots as Cobra allies though, wouldn't be seen until the first Devil's Due Joe / TF crossover almost 20 years later.) Higgins decision to focus on just a few characters from each team was a good one, grounding the conflict. The stakes were raised suitably high to justify the Decepticons-vs-everyone-else climax - this marks the only time in the U.S. G1 run when the Decepticons would attempt to actually destroy the Earth.

It also suffers from attempting to shoehorn it into continuity. Things like the transitions in leadership for three of the four teams is a distraction. The destruction of Dirge and Bombshell wouldn't quite take - Dirge would show up in G2, presumably rescued from Autobot incarceration in issue #41. Bombshell would cameo in that same issue, though I don't believe he shows up again, possibly making that an error. The origin of Goldbug is the main contribution to the actual G1 Marvel Transformers continuity, and even that is bypassable.

All told, a decent story but not worth going out of your way for. That it isn't readily available isn't such a tragedy then. If you have access, give it a whirl, if not, you're not missing so much.
Posted by Jimtron at 8:33 AM

I'd guess the cover was done by Herb Trimpe, as he did most TF covers at the time (and interiors on this series as well), and Blaster sports his cartoon-model head. He probably inked it himself, which is a good thing. Vince Coletta is a notorious inker. He got the job done when Marvel was in a hurry, but pencilers were never happy with the quality of the finished art when he embellished it. That's the reason why Trimpe's art looks so bad in this series compared to his Transformers issues, where he was inked by the likes of Tom Palmer and Ian Akin & Brian Garvey.