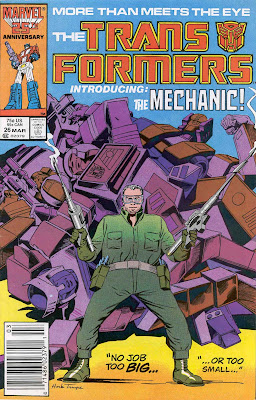 Funeral For a Friend! is the twenty-sixth issue of the G1 Marvel Transformers series. It was penned by long-term Transformers scribe Bob Budiansky. Pencils are by Don Perlin, backed up with Brett Breeding inks, Nel Yomtov colors and Janice Chiang's letters. The cover is a Herb Trimpe.

The cover mostly does its job well. The Mechanic stands in the middle of the picture, making an aesthetically pleasing X with his wide stance and his two smoking guns. The Autobots, block colored, are in a heap in the background. "Introducing: the MECHANIC!" it promises us, which works well. It lets us know that we're in for another Supervillain themed issue. The odd part, though, is the "No job too big ..." ".. or too small..." caption on the bottom. I don't get at all why that's there. It adds nothing to the visuals, and isn't particularly menacing.

Once inside the book, we're given an interesting tale. The first two and a quarter pages are devoted to Ratchet's frantic efforts to repair Optimus Prime, blown up two issues prior. He's spent 238 straight hours at the task, and he's nearly finished. All of the other operational Autobots watch on. Bob's prose is in top form here. "Ratchet waits as monitors scan Optimus for that spark -- one billionth of a volt would register."

Perlin and Breeding together do a fine job of conveying the somber mood with body language, facial expressions and plenty of dark hues. When Ratchet announces that Optimus Prime is beyond repair, one wants to cry. This is the sense of mourning that we didn't get back in 24, when Prime unexpectedly blew himself up. We'll get plenty more.

But for now, the plot has to march on. Omega Supreme has been busy since his creation. He's built massive artillery batteries into the mountain where the Ark has crashed, and has a radio activated power booster rod to control it. In theory, this allows the Autobots to safely leave their base without fear of finding it under Decepticon Dominion. In theory. All of the Autobots prepare to leave for Prime's funeral, but Ratchet can't bear to face another one of his failures. He has a great exchange with First Aid, where the younger Autobot advises Ratchet about the need to persevere, but Ratchet wants to grieve in his own way. The exchange rings true - a young bot saying the technically correct words to an older, more experienced bot, but without the emotional weight of experience behind it.

After his comrades depart, Ratchet laments how little he was able to do for his fellow Autobots. All he can do is keep them alive on life support, but he lacks the parts to return them to working order. Looking at Prowl's body, though, gives Ratchet an idea. He remembers seeing a place that might have parts - a junkyard. At first he finds it macabre, until he reminds himself that Earth machines are not alive. Soon he's finding part after part that might help his fellows, but he's interrupted by some humans doing illicit business. Ratchet transforms to lay low, observing The Mechanic and his henchman, Juan, attempting to sell stolen cars to what turns out to be an under cover cop. The thieves bolt and quickly discover Ratchet. Juan drives, while the Mechanic positively quivers in fear. He seems to have an unnatural phobia regarding the police. Ratchet quite rightly reasons that winding up in police custody is probably not a good thing for him, and so aids their pursuit with his cryogenic sprayer and his laser scalpel. With the cops no longer in pursuit, though, the Mechanic recovers his wits and begins to remove Prowl's weapons. The whole thing is a little contrived. Ratchet should have had the presence of mind to keep the thieves locked out of his interior, and probably should have ejected them long before they could start removing his innards. The Mechanic's astynomiaphobia is also a bit contrived, but then I suppose every supervillain needs an Achilles heel. 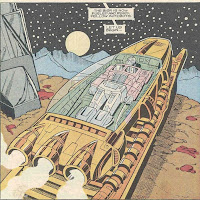 As Ratchet futzes about with humans, Omega Supreme officiates at Optimus Prime's funeral. He somehow looks positively gentle as he lays Optimus in his casket. I love the design of the casket - while I'm sure it's a Perlin original, it looks perfectly in keeping with Floro Dery's style. Yomtov's colors help add to the effect. We cut away from the actual body of the funeral, though some of that is depicted in G.I. Joe and the Transformers #3. We come back in time for the ending. Perceptor has the last word, and again, Bob's writing style has a great mix of expressiveness and slightly alien diction. "His courage was the beacon that guided us through the dark wilderness of this alien world. His love and kindness inspired us when our prospects seemed most bleak. His wisdom washed over us in unending waves. If we each retained but a drop we would each be immeasurably the better for it." Powerful stuff - Bob kills at eulogies. This is the real emotional heart of the issue, and it couldn't have been handled better.

There's also some most likely coincidental resonance with issue #74, which Furman was destined to scribe several years later. As Prime blasts off, Perceptor finishes with, "we send you to join with the universe -- to return to the cosmic dust from which all life began and from which it will begin again." #74 would reveal the origins of the Universe as we know it was tiny bits of cosmic dust that Unicron missed on his first pass through the universe interacting and forming the big bang.

But meanwhile, the Mechanic has big plans for the alien weaponry he's captured, and for the strange ambulance that contained it. Ratchet's heard enough, and prepares to retrieve his tools and return to base. The Mechanic, though, is as overconfident with machines as he is underconfident with the police. He dives for the cryogenic sprayer and ices Ratchet down. When Ratchet thaws out he decides the make his way back to the Ark, not realizing that he's being tailed. Undaunted at the site of an alien spacecraft surrounded by autoguns, The Mechanic makes his way into the base and uses Ratchet's own weaponry to defeat the Autobot. When the other Autobots return to base, he observes the power booster rod in action and reactivates the defenses. He also deduces its strength-amplifying powers and decides to add it to his arsenal.

Ratchet tries to save his companions, but gets both his knees blasted and is forced to retreat in Ambulance mode. The Autobots, meanwhile, are reluctant to fire on their own guns for fear of damaging their spacecraft and losing their best chance to go home. Ratchet gets too weak to drive and props himself up against the life support chambers. He's not depressed that he's going to die - he's depressed that he'll never get the chance to save his fellow Autobots. This, really, was his fear all along, triggered by his failure to save Optimus. It was clear that Ratchet gave everything he had to the task of reviving his leader and his friend, and it was not enough. All the emotional threads are together, and Bob bundles them up skillfully when First Aid's words of wisdom inspire a plan. 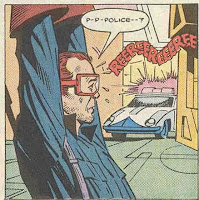 Using the parts from the junkyard, Ratchet takes the few minutes he has to get Prowl into some semblance of a working order. As the Mechanic prepares to crush Ratchet with the power booster rod, Prowl shows up ... in vehicle mode, sirens blaring and lights flashing. The Mechanic immediately turns tail and runs, allowing Ratchet to deactivate the defenses. The Autobots are battered, but still alive. First Aid thinks that they can all be fixed in a week, but Ratchet thinks that it can be done in two days. His confidence has returned. While he's still grieving for his friend, he realizes how much good he can do for the living.

While I don't find the Mechanic to be a compelling villain, the story is structured perfectly. Emotionally, everything fits together. Plotwise, everything is set up in advance and then ties up neatly. It's an almost textbook example of how to write a good Transformers story. Having Prime's funeral gives it an extra level of gravitas that the A-plot lacks. The artwork was unusually good in spots, which was a nice touch. Overall, I'd give this one an A minus despite myself. Funeral For a Friend! is available for sale from IDW Publishing as part of  Classic Transformers Volume 2.
Posted by Jimtron at 8:39 AM

This was one of my first TF issues, along with #6 and #7 (and Headmaster #1.) The overall plot and villain for this issue are kinda doofy, I think, but Bob's writing is just so dang powerful that it almost doesn't matter. I've always been a huge Marvel Ratchet fan, but just that single scene made me add First Aid to my list of favorite characters. Too bad he never got any more characterization in the comic.

I have no problem with the Mechanic here, and am just glad that they didn't overuse him because seriously after a while a regular human menace would become...blah

The one thing that always bothered me about this story was why build a power booster anyway. If they said something like, if we are all incapacitated and Buster was the only one to trip the defences, it would make some sense, but barring that (and Buster hasn't been seen at Autobot headquarters for awhile, so that would seem lame to me even if they did try to say that), it would make NO sense to make a device that could allow weaker beings to flip a switch. That is like having a computer tech make a device to allow insects to be strong enough to press the keys on your keyboard. Why would anyone want to do that? I mean, yes, Omega Supreme is STRONG, but i imagine even Bumblebee could flip a switch on the Ark's computer without straining?!?!? Does no one else think that is a SERIOUS flaw in the story?