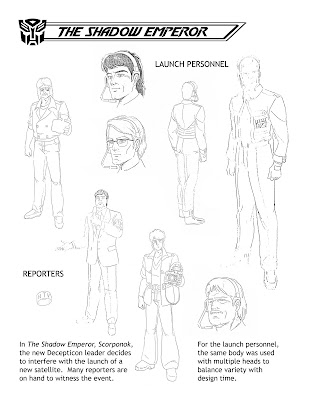 I thought I'd get an early start on the day, since poor Iván is still having computer problems. This week's edition of The Ark Addendum features about half of the models from The Shadow Emperor, Scorponok. This episode features Scroponok's first action as leader of the Destrons, the theft of the Solar-1 satellite.

I like the technique that the designers employed to give a bit more variety to the extras, having one body but multiple heads. Note how the head is blurred out to make clear what's going on with the heads. Each reporter, though, gets his own model, though note how they declined to draw the same camera twice.

Also, these models are a bit worse off than I'd normally use in a finished product. I hope you'll forgive me for not redrawing the feet and hands that trail off, I think it's pretty clear what's going on.