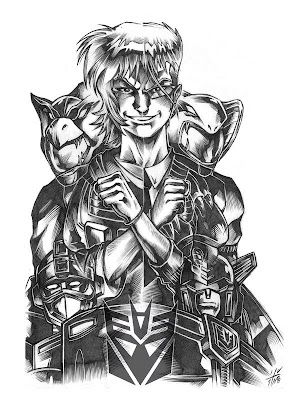 Hope everyone had a great weekend. I certainly enjoyed a lazy summer weekend of reading and swimming and watching War of the Worlds. Now it's time for another edition of Ivan's Gallery. This week, Iván brings us the Darkwing brothers. Here's what the artist has to say about them:

Great characters, the intention of this Pin-up is clear... play with the duality of this brothers. Interestingly these characters appears in Marvel series... but a very uninteresting.

Buster (left) and Hydra (right) are repainted and darkwing of Dreadwing in Masterforce version, and like all human components has its power bracelets. Buster is a DJ, has a certain effeminate appearance, the very era of the eighties, reminds me a little of David Bowie in Labyrinth movie, I think it is the younger brother.
Both are German, Hydra, for his part is an actor, and uses this chip in occasions in the series to lay a trap to Autobots. Is the boss in the group.
They are Transtectors, are different to the rest, are not Headmasters, they are transformed into engines, so it is assumed that are more fearsome. And also could be combined in airplane mode and form a rare aircraft... very funny... It is not very clear, but it seems to have been adopted by Giga and Mega and have special training.
The figures, the prices are very high, and more at the Japanese version, and even more if we look for a pack showing both. I think around 500 dollars.
Why, despite that I like a lot, are two of the figures that I have not yet, and certainly make me more enthusiasm in its Japanese version, although I think the American version in its colors are better.
In any case, the picture we see the characters, the human form with armor, and some of his robot form. Then I played a little with the composition, to make the arms of both species together in a single body to display his mechanical gadgets as they do in the series.
Then got to finish the composition Decepticon logo. I enjoy with this picture that even I did a quick version to color, play with the color range of each.
Then I have done a better version of the brothers .. giving a more serious and realistic, which I hope soon you will see in a mosaic.

That is really good artwork. I have always loved those two.