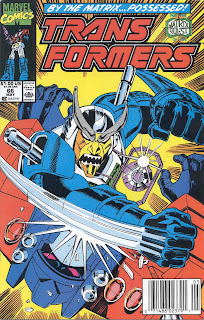 All Fall Down is the sixty-sixth issue of the US G1 Marvel Comics run of Transformers, and the fifth and final issue of the Matrix Quest mini-series.  (Note, All Fall Down is not to be confused with ...All Fall Down!, the fourth issue of the G.I. Joe and Transformers crossover.  It's slightly clumsy to reuse a title like this, but it works very well for the story so I'll forgive it.)  The creative lineup is virtually unchanged from the last issue; only the cover artist has changed.  That means that it was written by Furman, drawn by Senior, lettered by Massara, and colored by Yomtov.  Ian Akin produces another cover.

The cover is perfectly serviceable, but uninspired.  Thunderwing decks Optimus Prime, while wearing the Matrix around his neck.  That's about it.  The anatomy seems a bit off, if you try to extrapolate where their bodies have to be to make it work, but that may be nitpicking.  I think the real issue is that it's just a big boring.  It's perhaps too literal for my tastes, after the rather more abstract covers we've been getting recently.  Yomtov's (presumably Yomtov, anyway) bright yellow background contrasts with Thunderwing's blue limbs, making it at least pop. 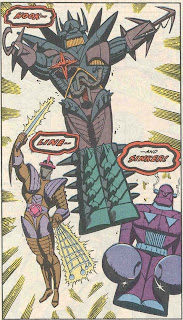 Thankfully, the issue itself is anything but uninspired.  Furman is clearly becoming more comfortable steering the ship, elegantly mixing in elements from future stories.  He rather shrewdly opens this book in an unexpected quarter of the galaxy; the planet Ghennix, currently being consumed by Unicron.  He destroys three inhabitants attempting to flee, and rebuilds them into new agents (Hook, Line, and Sinker) to do his bidding.  They are to be dispatched to one of Unicron's possible futures to secure an agent.  The silhouette on the monitor makes it clear to the Transformers-savvy that that agent is Galvatron.  It's a great way to open the issue, as it simultaneously lays groundwork for future stories AND ratchets up the tension.  After all, we know from last issue, and from the cover, that there's going to be a massive fight on board the Ark... delaying it for three pages only makes me want to get to it all the more.  Senior's designs on Unicron's latest agents are flippin' awesome, by the way.  I'd love to get toys of these bad-boys.  There actually are toys that name-check them, at least... Astro-Hook, Astro-Line, and Astro-Sinker were repaints of the Giant Planet Mini-Con team that came with the Fun Publications Astrotrain toy.  Finally, props to Jim Massara for his excellent lettering work on Unicron's mind-speak.  It's bold, it's powerful, and it makes it easy for me to hear Orson Welles in my head while reading it.

Unicron sets up the transition back to the main plot, by observing that his preparations may be unnecessary, with the Matrix turned to "the ways of evil."  From here-on out, we're mostly treated to gigantic battle.  At first, Optimus orders his warriors to hold back, lest they destroy the Matrix.  Prime wants to rescue the Matrix, cleanse it of its taint.  Thunderwing and the Matrix are having little of that, though.  I love how much motion is implied by Senior's relatively simple drawings.  There's great economy in panels like this one.

To break things up and keep the pacing from becoming overwhelming, Furman has two interludes. One is a brief flashback, showing Thunderwing's acquisition of the Matrix.  The other is another intriguing scene of Shockwave staking out the Decepticon base on Earth, and observing Starscream skulking out into the night.  He hypothesizes that Starscream could be just the tool he needs to wrest command of the Decepticons from Shockwave.  While the flashback was fairly unnecessary, at least from a plot point of view, the latter flashback proves that even while gods and demons are duking it out, life goes on.  How petty the machinations of Shockwave and Starscream seem when held against the tapestry that is the Matrix Quest. 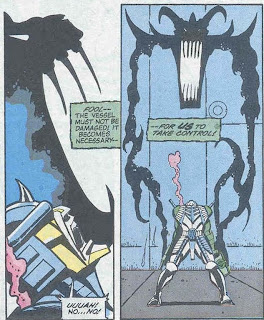 Inevitably, Thunderwing is possessed by the Matrix.  The words (if not the image) on the cover told us t'would happen, even.  His own men try to save him from this fate, imploring him to shake off control of the Matrix.  For Spinister's efforts, he takes a chest full of blaster.  This temporarily shocks Thunderwing free of his reverie, an opportunity that Optimus uses to clock him one.  Thus distracted, Thunderwing falls prey to a plan hatched by Nightbeat, who had revived and snuck aboard the Autobot shuttle.  Thunderwing is grappled, the landing bay doors opened, the landing clamps released, the shuttle set to self destruct, and the gravity turned off.  Thunderwing and the Matrix are pulled into space and hit with a massive explosion, saving the day.  It's a very slick ending, though I think Furman missed a trick.  Deadly Obsession would have been the perfect time to introduce the grappling hook as gear used by Autobot shuttles.  That's a minor quibble, though.  It's rather elegant, both the plot and the pathos.

The denouement is brief.  Nightbeat is saved from the sucking vacuum of  space by Siren, the Decepticons surrender to Hot Rod, and Optimus Prime sees the silver lining of the day.  Despite three Autobots deactivated and ten or so injured, and of course the loss of the Matrix, the Autobots faced their own dark side and triumphed.  Optimus is more determined than ever to face the future, 'bonded as one.' That phrase will help foreshadow upcoming events rather niftily. 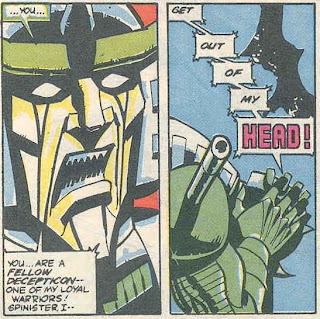 And thus ends the issue, and the Matrix Quest.  As I pointed out in an earlier review, this story arc was more about Thunderwing's journey than just about any other character.  Optimus and Nightbeat get some good moments in here and there, but Thunderwing steals the show.  It's a sad journey for him; by getting what he wanted, he destroyed all he was.  Thus, it's a somewhat cautionary tale on some level.  I loved him shooting his own trooper, then briefly recovering.  (Oh, and again, Massara did great work here.)  One gets the strong sense that, had Optimus Prime reached out to Thunderwing in his moment of clarity rather than punching him in the face, the Matrix might have been recovered.  Alas, he didn't, and the Matrix was lost.  Deviate from your ideals at your peril, Optimus!

It was also a bold choice, to end the Matrix Quest with a failure.  The Matrix is lost, and remains corrupted by darkness.  The Autobots are, at least physically, worse off than when they started.  I like the idea that Unicron may have to be defeated without the rather literal deus ex machina that is usually employed.  Nightbeat, as mentioned earlier, stood out as a new Autobot worth watching.  And the various seeds planted for future stories, well, they seem like avenues well worth exploring.  All told, Furman seems to have hit his stride, and this issue seems to herald great things for the future.

The next issue plays with Optimus' final "We shall win!" speech. "Don't be too sure, Optimus Prime," the blurb rebuts,  "because the future holds... " Umm... squee?  All Fall Down is available in IDW Publishing's  Classic Transformers, Vol. 5 at Amazon.com.
Posted by Jimtron at 9:58 AM

They say things only get better in time, right? Well, re-reading this issue makes it painfully obvious (to me, at least) that the present day Transformers comics (IDW Ongoing... I'm looking at you) are very shallow and pathetic attempts compared to what was done in the late 1980's by Furman and crew. There is so much more fire, suspense, build-up, teasing, and action in these issues, it's insane. I highly doubt that in 20 years time we will be talking whith such reverence about the current Transformers comics as we do about the old Marvel issues.

What's even worse, is that comics on the whole have been much more decompressed, and written for a trade format (usually 6 issues). It's an across-the-board kind of thing.

Thankfully, one IDW series has already become an instant classic: Last Stand of the Wreckers. That one we WILL remember 20 years from now, I think :)