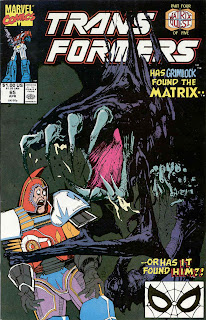 Dark Creation is the sixty-fifth issue of the US G1 Marvel Comics series of Transformers, and the fourth part of the five-issue Matrix Quest series.  It was written by Simon Furman, drawn and inked by Geoff Senior, lettered by Jim Massara, and colored by Nel Yomtov.  The legendary Bill Sienkiewicz returns to provide a second cover to the series; if you remember, he did the rather abstract first issue cover as well.

Once again, Sienkiewicz produces a memorable cover.  Grimlock, in his pretender shell, is gripped by a bizarre monster with enormous angled teeth.  The monster is rather amazing, though Grimlock seems just a bit flat.  His face, though, is shattered in horror.  The inking, especially on the monster, emphasizes the irregular and terrifying nature of the encounter taking place.  This is indeed a creature that has crawled out of our nightmares and onto the page.  "Has Grimlock found the matrix -- or has IT found HIM?"  It's a cover that promises a lot, and fortunately the issue delivers.

The story is brisk, action-packed, and very exciting.  It frankly raises the bar from the rest of the Matrix Quest, which after a strong first chapter had been meandering around somewhat aimlessly.  Once again, Furman riffs on a movie, this time Alien / Aliens.  There are several nods to that, especially the name of the moon (VsQs, for Vasquez) and planet (Cameron, obviously named for Jim Cameron.) 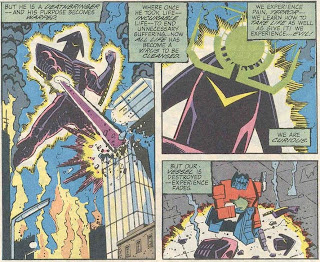 It opens with a brief interlude, showing the funeral barge for Optimus Prime crashing here from the perspective of the Matrix itself.  We're treated to a rather inexplicable scene of the Matrix rebuilding a dying euthanizing robot and rebuilding it into a Deathbringer, which is apparently destroyed by Optimus Prime.  (Years later, I would discover that these events had been depicted a few months earlier, in the UK Story Deathbringer, which ran from issues 235-236 and has been collected by Titan Books in their Aspects of Evil trade paperback.  It's a rather good ten page black & white story, and the only UK story directly referenced in the US run.)  The Matrix misses the experience that its vessel provided, and creates another one from a native critter.  This creature exists only to hunt and kill, though it's prey is "neither food nor enemy." It rebuilds the creature into something dark, and horrible.  Time passes... 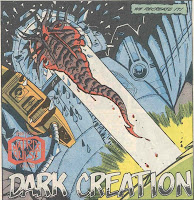 The interlude, despite the rather odd inclusion of the Deathbringer material, is very strong.  Even that isn't bad, it's just slightly odd.  An editorial note saying where these events were from might have been a welcome addition, given the inclusion of Optimus Prime.  Had he been left out of that part of the tale, I think as a kid I'd have just assumed the creature was eventually stopped off-screen.  The slow corruption of the matrix, though, is potent stuff.  Every aspect of the story, from the coloring (dark) to the lettering (irregular green) to the prose to the art is very strong.  And boy oh boy, does the alien facehugger look familiar or what? 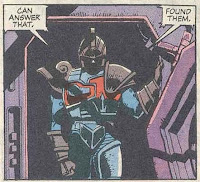 As I said, time passes, and the Autobots arrive.  After four months of second-stringers, we're treated to an a-list team of Grimlock, Jazz, and Bumblebee.  They've arrived at the VsQs base, set up to investigate an object that crashed on this moon.  The object, they're sure, can only be the funeral barge, but the entire base looks like a war zone.  They know they're close to the Matrix, but given the apparent horror it precipitated, they wonder if finding it is actually a good thing.  Grimlock rather darkly informs them that he's found the team, though they won't be telling anyone anything ever again.  It's all dark, moody stuff, and the image of the creature watching the team from the shadows and twitching only enhances the horror.  We the audience are on edge, just waiting for everything to fall apart. 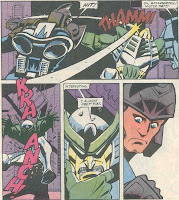 And fall apart it does, though from a slightly unexpected quarter.  Thunderwing smashes through a window and confronts the Autobots.  Furman deftly cuts to his ship, showing Ruckus on guard duty.  Rather cleverly, we see that the computers that he had been punched into last issue are, in fact, connected to the three captured Autobots... and the wire is starting to smoke.  But the main action is on the base, where a brief attempt at dialogue is interrupted by Grimlock, who's efforts against Thunderwing are singularly unimpressive.  Senior takes advantage of his human form to make him rather more emotive than usual, though there is something weird going on with Thunderwing's helmet in the bottom middle panel to the left.

The battle is joined in earnest when Thunderwing sics Spinister, Needlenose, and Windsweeper on the Autobots.  It's an exciting fight that Thunderwing rather handily dominates.  He shakes off Grimlock rather effortlessly, then casually destroys Bumblebee's Pretender shell and nearly offlines the 'bot.  In fact, things are proceeding so well that Windsweeper stands back and watches... unaware that he's being stalked.  We cut to another interlude as messy organic tentacles wrap around his throat and begin to pull him up towards oblivion!  The fight is exciting, the pacing is terrific, and the dialogue is pure comic book fun.  "Ah, Bumblebee -- how recklessly we throw our shells into battle!  Like you, I am a pretender -- albeit more powerful and durable than yourself -- and I know that whatever damage is done to the outer shell is felt by the owner.  Only more so!"  Pure fun!

The interlude is a great page - in fact, I own the original artwork to it, one of two pages from this issue that I own.  On England's west coast, a man walks his dog, Patch, who growls at something in the sea.  We see the seaweed-laden form of Shockwave explode from the water, then reason that since his plans do not allow for being seen, he must silence the fleshling. We're once again glimpsing life beyond the Matrix Quest, and it's most welcome.  Scenes like this give the universe a bigger, more epic feel, and there will be payoff for it in a few months, in issue 68. 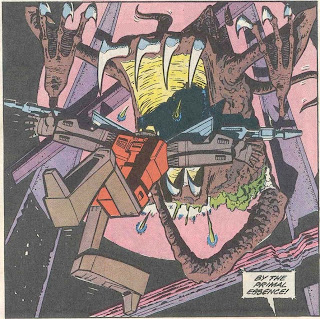 On VsQs, though, the payoff is immediate.  Thunderwing rather beautifully grabs Jazz and has him use his headlights, giving us a clear view of the creature.   Needlenose wants to rescue the creature, but Thunderwing thrusts him aside.  The creature is dripping with matrix energy, and Thunderwing means to track it.  It flees, and the Decepticon leader pursues.  The Autobots limp off and the Decepticons abandon their leader.  His obsession has become too much for them.  It's an obsession we've seen building for several issues now.  In fact, by this point it's becoming clear that the Matrix Quest is more about Thunderwing's journey than about the recovery of the Matrix itself.  He's the only character in all five issues of the story. (Well, him and his team, but they're mostly there as props for him.) 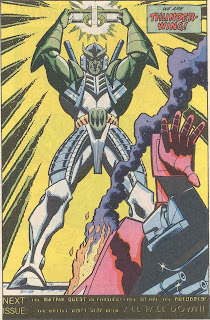 The climax approaches.  Jazz stumbles onto the location of both the Matrix and the creature, and is unceremoniously pulled aside by Thunderwing.  The 'Con calls to the Matrix, which starts to obey, but the creature objects.  They battle while the Autobots flee with their prize, weighed down by the heavy gravity of the moon and their own lack of energon.  Time passes, and the Autobot shuttle approaches the Ark.  Optimus can feel the Matrix on board, and greets the shuttle with open arms.  Sadly, for him, the occupant of the shuttle turns out to be none other than the newest Matrix Bearer, Thunderwing.  The final page of the penultimate chapter of the Matrix Quest has left things dark indeed.

The Matrix, corrupted!  Thunderwing, victorious!  It's a truly fantastic ending, and unlike most previous chapters of this take really leaves me wanting more.  The entire issue was laden with action, suspense and horror.  Incidentally the page to the left is the other piece of original artwork I own from this issue.  (Yeah, yeah, I know, you're envious.  It's natural.  No, it's not for sale.)   We get payoff for Thunderwing's growing obsession and a sense that things are going to get worse before they get better.  The artwork is dark, moody, oppressive.  Senior's stark inking works really well in a horror setting, emphasizing the bleak nature of VsQs.  Event the lettering is terrific, with the green Matrix bubbles feeling sort of warped and twisted.  This is another issue that's pure win, and I can't recommend it strongly enough.


Next month, "The Matrix Quest is finished --- and so are the Autobots!  The battle won't stop until ALL FALL DOWN!"  Needless to say, I'll be there. Dark Creation is available for sale in IDW Publishing's  Classic Transformers, Vol. 5.
Posted by Jimtron at 10:10 AM

This might be the absolute best issue of the entire Marvel G1/G2 run. Those last two pages ("We are Primus... We are Prime Nova... We are Sentinel Prime... We are Optimus Prime... We are THUNDERWING!") are positively chilling. Senior's artwork is absolutely phenomenal--that first panel of Grimlock that you posted is gorgeous. (And I don't see anything wrong with Thunderwing's helmet; maybe the heavy shadows are throwing you off?)

About the only thing that bugs me about this issue is the weakness of the Pretender shells. Its wearer feels any damage, only more so? Really? So why in the world would anyone wear one? Heck, Thunderwing's a Pretender! Grimlock's sucker punch should warrant more than a "I almost felt that" don't you think?

Sure is, Pete. That's a great piece!

Thanks for clarifying, will have find myself a copy of the issue and have them framed.

Further to my post above, is the artwork worth much, for insurance purposes mainly