Review: War of the Worlds, the series ep 33 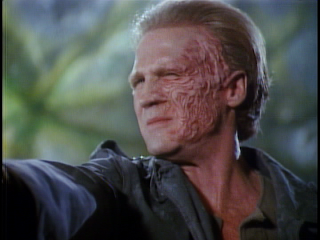 The Defector is the thirty-third episode of War of the Worlds, the series.  It's also the tenth episode of the second season, marking the half-way point.  The Morthren build a machine that allows them to tap into human computer systems, download their data, and kill the operator.  Sadly for them, this formidable weapon backfires on them and maims Kemo, its creator.  As the Morthren have no tolerance for imperfection, Kemo is sentenced to death.  His accident has left him with human emotions, though, and he rebels and escapes.  With the help of Kincaid, he destroys the weapon and wanders off into the sunset.

The Good: We've now had three of the four current team members make peaceful contact with a member of the Morthren / Mor-Tax.  Harrison had his back in season one's The Prodigal Son with Quinn. Debi shared a moment with young Ceeto in Loving the Alien.  And now, Kincaid, who is probably the least-likely, has made a friend in Kemo.  All this will pay off in the season finale. 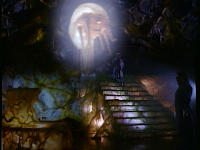 Charles McCaughan does a good turn as Kemo, the alien who becomes part human.  His desire to live, despite his deformity, manifests itself in many interesting ways; first he insists that only he can finish the weapon, then he appeals Malzor's decision all the way up to their living God, and finally he fights his way free.  (I also like that Malzor's decisions CAN be appealed.  It makes the Morthren feel more like a society.)

Still on Kemo, his flight to the lair of Ace, his first victim, is a smart plot point.  It makes sense; where else in the city would he know?  The way he covers Ace's body sheet is also great, a very un-Morthren moment.  "Does YOUR God accept you," he asks the body.  Classic.

It's also cool that, while Kemo kills three guards on the way out of the complex, on the way back in he has his weapon set on stun.  He's done with killing.

Malzor gets in some good moments.  When Ardix questions his decision to send all available soldiers to search for Kemo (leaving them with minimal security, Ardix notes), Malzor's rebuttal makes perfect sense.  "If Kemo talks, security won't matter."  No, I suppose it won't.  These guys are not set up to fight a war, the title of the series aside.  Keeping the secret of their base's location has to be of paramount importance.  When Malzor confronts Kemo at the end of the episode, Malzor has balls of steel.  Despite the cabbage-gun leveled at him, Malzor boldly strides up to his adversary and thrusts it aside.  I rather like how hands-on Malzor can be.

Scoggs is back, as a member of the Grapevine computer network.  (Others on the network include Rogue, the alter ego of the Blackwood Project, Roller, Lonelyheart, and Ace.  Aside from Scoggs, all would perish this episode at the hands of the computer weapon.)  She's a more real character this time out, and has some nice chemistry with Kincaid when she tells him to be careful. 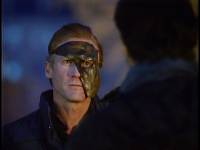 The Bad: At the end of the episode, Kemo wears some kind of Phantom of the Opera mask to hide his deformity.  It seems a bit much.  What, is he picking up human vanity now?

It's very clumsy, how the members of the Grapevine speak out loud all the lines they type into the computer.  I understand WHY they're doing it, but one must imagine there is a better way.  It feels like some high-up studio exec came in and told them that they couldn't just show the words on the screen, they HAD to say it out loud.

Speaking of clumsy, Suzanne and Debi have one scene this episode, wherein they say that they're off.  Debi has exams to take.  I understand that the writers are generally more interested in Kincaid and Blackwood, but this seems clumsy. 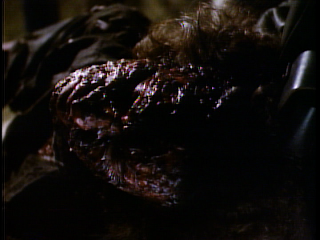 The Ugly: There are numerous charred corpses at the hands of the computer weapon.  I decided to go with Lonelyheart, because that was a particularly good reveal.

So, there you have it.  This episode was a relatively strong offering.  The alien weapon is very powerful, and yet seems plausible.  Kemo's journey is convincing, and takes Kincaid to interesting places.  Most of the flaws are more like nitpicks, and most of the virtues are of substance.  It's a nice addition to the tapestry.

As strong as this episode was, there's a behind-the-scenes missed opportunity.  Greg Strangis had been pushing for the return of the aforementioned Quinn at some point in season two.  This episode grew out of that idea, sadly bereft of Quinn.  Now, mind you, this whole episode actually works very well as written, so it's hard to get too upset on account of The Defector.  However, having Quinn grace this season with his presence would have gone a long way towards making S2 feel connected to the mythology of S1.  To see him square off against Malzor and Mana would have been magic.

, will be out on DVD this October and is available for preorder now.
Posted by Jimtron at 10:39 AM

This episode is actually a pretty strong outing. The whole deformity thing though is something that doesn't really work with me though. If it is only the exterior human shell that is damaged, why would it be so important to the Morthren? I know they're perfection-obsessed, but a repulsive human exterior should mean nothing to them, since it's not their natural form.

Now, I'm not sure if Greg lobbied so much over Quinn's return as Herb Wright did (since Quinn is his creation). I know Herb did try to push for Quinn to return and he thought he did but they botched it up in "The Defector" (I told him that Quinn never did return).

If only they could have gotten Colicos to return as Quinn- that would have been epic but Quinn would have made mincemeat over the Morthren. They don't have even half the army or threat of the first season aliens from Mor-Tax.

I like the acting in the final scene but for whatever reason, it diminished Malzor's power as a villain for me to watch him get his ass kicked by Kemo.

I did enjoy the scene with Kemo being rejected by the Eternal and yes, the "Does your God accept you line?" is very well done. Charles McCaughan did a very good job with the role.

Nitpicks aside, I would say this is one of the stronger outings from the second season.

agreed to all statements. i had issues with the physical deformity rejection thing immediately because i'm always keeping in mind the Morthren's native form. this is one of the biggest problems of "alien taking human form" sci-fi. it just doesn't ring true when they start talking about physical appearances... which should really near eliminate any possibility of cross-species attraction and "romances" like between Debi and Ceeto. this is especially the case in WOTW as the aliens' native form is so utterly UNLIKE human beings in any way. but, we're seeing yet another fine glaring example of Mancuso's team completely forgetting that these ARE aliens. bad, easily digestible, pop sci-fi is filled with "human aliens." my primary attraction to WOTW was the utterly brilliantly designed and utterly foreign xenomorphology of the aliens... which S2 ignores except for very focused and very isolated moments three episodes out of 20.

(would Debi have balked at her romantic infatuation with Ceeto if the Obelisk's history crystal had shown her what Morthren look like in their natural form?)

I'm surprised that no one has mentioned how completely out of character Harrison was in this episode. Generally level headed and open, even in this second season, he grabs Kemo and roughs him up screaming "You killed him!" and yells " what if he's using us?" This is the only time in the entire series he does this and it just doesn't fit. Clearly, the writers wanted to make the point that Kincaid was changing and willing to open up, but it was at the expense of Harrison and didn't work. I wonder why Jared Martin didn't protest things like this, since he knew his character better than anyone.