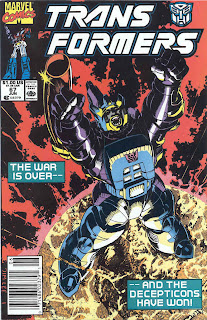 Rhythms of Darkness! is the sixty-seventh issue of the US G1 Marvel Comics run of Transformers.  José Delbo returns as penciler for one last hurrah; this is his twenty-fifth issue, more than any other single penciler did for the G1 comic.  (For those keeping track, the remarkably prolific Don Perlin clocked in at #2, with twenty-one issues of Transformers under his belt.)  Furman, of course, continues on as writer, as he will through the end of the book and for the entirety of the G2 comic.  Danny Bulandi returns as inker, with Massara and Yomtov on letters and colors, respectively.  The cover is by Jim Lee, Marvel's rising star.

Galvatron stands triumphantly above the earth.  The bold red and black of space contrasts with t he swirling yellows of the earth, giving a sense of fire and explosions.  His facial expression is one of pure triumph, and his body language is arrogance incarnate.  The color contrast makes the cover appear more violent than it is, and the 'X' that Galvatron makes with his body draws the eye right to the Decepticon symbol, apropos of the theme of the issue.  "The war is over -- and the Decepticons have won!", we're informed.  It's a very solid cover; not Jim Lee's best, but it certainly works very well and might have gotten some new readers to at least pick up the book and leaf through it.

The issue itself more than lives up to the promise of the cover.  We quickly establish that Galvatron is the Decepticon leader of 2009, an alternate (snicker) future where Unicron was triumphant and the Decepticons rule earth.  The ruins of New York are to be the setting of the issue, established in a gorgeous two-page spread.  We even introduce some new toys; the Monster Pretenders are his troops de jour, and Furman squeezes in a bit of characterization for some of them.  Icepick is ambitious, Wildfly rebellious, and Slog like Yoda speaks.  Galvatron, though, is the real star, ranting to his troops and confronting the corpse of Rodimus Prime, strung up between the remains of the Twin Towers.  All in all, the issue is off to a roaring start.

Though the Decepticons seem to hold all the cards, the Autobots aren't quite down for the count yet.  Seven Autobots head towards New York, carrying human resistance fighters with them.  One of them is our old friend Spike Witwicky, though sadly bereft of Fortress Maximus armor.  We learn how Galvatron conquered North and South America after Unicron devoured Cybertron.  We also get an opportunity for some humans to shine, a first in Furman's US run.  Spike and his gal Lisa help rally the despondent Autobots, dragging them back into the fight.  There's even a ticking clock for added tension, with just over an hour to go before North and South America are reduced to radioactive slag by the European and Asian powers.  (Shane McCarthy would revisit this idea later in All Hail Megatron.)

At T-Minus one hour, three minutes, and forty-six seconds, the attack on the Decepticon Powerbase begins.  There's one last bit of irony, though.  Galvatron plans to absorb the energy from the nuclear strike, to power the Decepticons forever.  The caviler attitude of Cyclonus and Scourge prompts Getaway to freak out and charge at them, forcing Prowl's hand.  Chainclaw and Guzzle help out the Powermaster as Inferno, Jazz, Prowl, and Crossblades charge the main base.  Crossblade, mortally wounded, flies into the shield generator and opens the door for his fellows.  The Autobots lead a desperate charge, hoping to keep the 'Cons off-balance long enough for spike to deploy his secret weapon.  It's all very well done, with desperation on the part of the heroes and cockiness on the part of the villains.  And what could the secret weapon be?

Scourge, Getaway, and Guzzle are all down, and Chainclaw gets the drop on Cyclonus.  The Autobot is destroyed by a blast from Galvatron, much to Cyclonus' relief.  However, his respite is only temporary.  Galvatron destroys his minion for allowing himself, a 'being forged in the fires of Unicron himself,' to be bested by an Autobot.  (This is a continuity headache, as Cyclonus and Scourge have previously shown up as minions of Scorponok.  The UK comic would address it by having them fall through a time portal to end up as soldiers under Scorponok's command.) 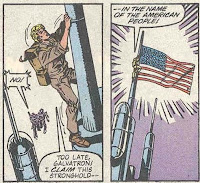 With Galvatron joining the battle, Jazz briefly considers flight, but then stays to battle hopeless odds to buy Spike a few more precious seconds.  The watching world needs more than sacrifice, though, they need victory.  Spike, at the apex of the Decepticon structure, delivers that victory when he unfurls a giant American flag over the structure, claiming the stronghold symbolically in the name of the American people.  It's enough; the launch is aborted.  It's a cheesy gesture, but it has a kind of Red Dawn sort of cinematic optimism that somehow works. 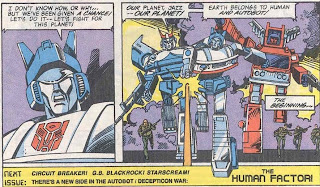 Galvatron prepares to incinerate the human and the flag alike, but the arrival of three more minions of Unicron throw a spanner in his plans.  In the span of about a page, Galvatron is snared by Hook, tangled by Line, and knocked unconscious by Sinker.  To the past–er, present–they depart.  With this unexpected development, the humans and Autobots rally.  Given the open canvas, Furman appropriately ends on "The beginning... "

It's another very strong issue.  Clearly, Furman has been moving pieces around the chess board for some time now, since about issue 60, getting ready for his big Unicron story.  After the Matrix Quest, things were very nearly ready to begin, but there were just a few more ideas he had to set up.  One of them was Galvatron, destined to play a critical role in the proceedings.  This story, set up last issue, pulls him into the present.  It's a stand-alone story in many ways, painting a brief portrait of Unicron victorious.  The idea is rather deft, as the stakes of the upcoming Unicron battle are made clear. We end on an optimistic note, as even this dark future hasn't yet extinguished hope. 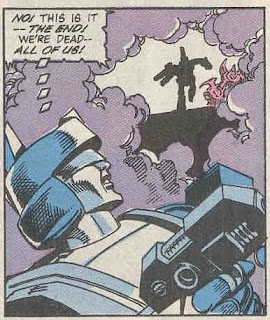 The artwork is also quite nice.  Delbo gets to shine one last time, with some great designs and some rather dramatic scenes.  I love his Powerbase, all cylinders and circles and spheres.  Note how the Autobots seem to be bursting from the final panel of the issue.  Finally, isn't the silhouette of Galvatron, framed by smoke, just a terrific image?  He's a model of power and energy, and Jazz's reaction seems completely appropriate.

Next issue: Circuit Breaker! G.B. Blackrock! Starscream!  There's a new side in the Autobot / Decepticon war: The Human Factor!  Sounds exciting!  Rhythms of Darkness! is available for purchase in IDW Publishing's Classic Transformers, Vol. 5 .
Posted by Jimtron at 11:26 AM

Aw man.. those were the days. Marvel's G1 continuity is still the benchmark of all Transformers stories in my opinion :o)

I agree, this comic was so incredibly good... loved this issue. And great art by José Delbo.