Review: War of the Worlds, the series ep 42 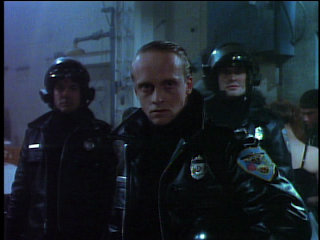 The second to last episode of War of the Worlds, the series, is titled The True Believer.  With alien resources running dangerously low, Malzor hatches a scheme to turn the human authorities against the team by framing them for robbery and infiltrating the police.  It meets with initial success when Blackwood is nabbed.  The plan is thwarted, though by Officer Thresher, a rare honest cop amid the apathy and corruption of Sector 7 of the city.  (No relationship to Sector 7 of the Transformers.)  He discovers what the aliens are and helps deliver a stunning reversal to the Morthrai.  The episode ends with the aliens on desperate footing and The Eternal demanding to see Malzor. 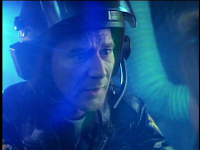 The Good: Great acting all around.  Timothy Webber, in particular, did a nice job as Thresher, the most likely candidate for the true believer mentioned in the title.  (I'd say that Harrison, Kincaid, Debi, and Malzor are all possible candidates, a bit of ambiguity that I like.) I liked Kincaid informing Debi that she may have to carry on the fight. Blanchard also does a nice job when she thinks her mother and adopted fathers are murderers.

Desperation.  At the start it's the aliens, with Suzanne's tissue samples revealing that they're low on protein, amino acids, and chlorophyll.  (Nice touch on that last one.)  Their watchers are running out of power, and their cloner won't work.  But after Malzor's initial success, it's the team that is desperate.  Suzanne is shot, Blackwood captured.  With Thresher's help, though, the balance of power shifts back to the humans by the end. 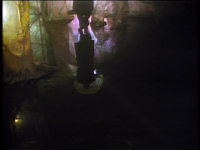 The directing.  There is great use of lighting and staging throughout.  I especially enjoyed a bit of symmetry in the opening and the closing, wherein people run through reflective water.

The continuity is pretty good as well.  (But see below.)  When Debi turns a gun on the team, thinking they just robbed a bank, Kincaid points out his scar.  Clones don't have them.  Also, the aliens start out the episode knowing who Kincaid is, and figure out the rest with a watcher.  Presumably they know John's face thanks to the events of the previous episode.  Finally, Salo, the namechecked minor alien introduced in Path of Lies, returns, only to be one of the many soldiers gunned down in the ambush. 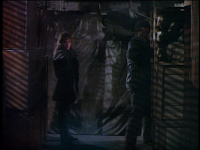 Nice action this episode.  From the opening, where Kincaid leads two soldiers into an ambush, to the showdown with the cops, to the final ambush (but see below), we get plenty of firefights.  Don't Harrison and Suzanne look hard here?  (Again, nice directing.  The alien blood spraying the camera a few seconds before this still was nice too.)

I got a little kick out of seeing Malzor infiltrate the police to hunt the humans.  It's almost a mirror image of So Shall Ye Reap, though I'm sure that's unintentional. 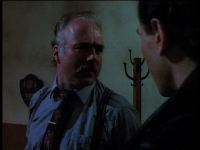 After almost a full season, we finally get to see the police of Almost Tomorrow.  I like how run down and beat up all their gear is, and how they spend all their time keeping the safe parts of the city safe and leave the run-down parts to fend for themselves.  I also like the idea of cops unmotivated by anything other than the bounties they bring in.  As an extra treat for BSG fans, Michael Hogan does a stint in the small but fun role as Captain Nash.

Finally, the last scene where Mana dresses down Malzor is fantastic.  Workers guarding the perimeter?  Rations cut 20%?  If I were Malzor I'd be pretty worried about speaking to the Eternal too.  Probably wise of them to set up The Eternal here, if they're planing to use him in the series finale.  (Spoiler alert: they are.)  It's been an awful long time since we've seen their resident deity.  I think Time to Reap is the last time it showed its ugly... well, not quite face, but... 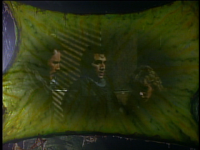 The Bad: The episode makes a big deal about the aliens finding out exactly who they're fighting, but shouldn't the aliens already know who the team are?  They were smart enough to target General Wilson a year ago, and set up an ambush for Blackwood WAAAAY back in The Second Wave.  I guess they think their operation against the cottage was a complete success?  Clumsy, anyway.

The ambush.  Yes, it was exciting, but... A, how did Malzor get an ambush set up so quickly?  He only just found out about it.  B, how did the team survive?  OK, inexperienced malnourished aliens shouldn't be as tough as the hard dudes who took down Omega Squad in the aforementioned The Second Wave, but it looked like Kincaid and Thresher (and a dazed Blackwood) took down about nine aliens, who had them surrounded and held the high ground.  Exciting, sure, but ludicrous.  Malzor's plan was perfect, it failed due to writer fiat apparently.  Much better to just have Kincaid get the drop on Malzor's forces I think, which is both more logical and more believable. 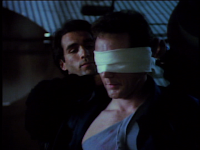 Perhaps not a bad so much as a missed opportunity, but the episode makes a point of showing that the team doesn't entirely trust Thresher, leading him to the surface from their lair with a blindfold.  First off, that's very Adam West Batman, but secondly it's the second to last episode of the series.  If ever there was a time, dramatically, for them to be gathering up some new allies, it's now.   (I usually would put 'things that could be done better' outside of the G/B/U schema, but the blindfold tipped me over the edge.) 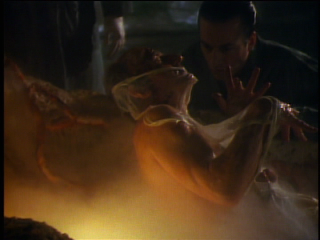 The Ugly:  Failed clones will do it, though actually it's especially gruesome.  It's official, that arrow has been removed from their quiver.

Overall, it's a pretty good one.  The few flaws do little to detract from an exciting, fast paced, well acted and well directed story.  So, the series prepares to end itself and does so by making the ALIENS desperate.  Interesting choice.  Usually you would make the heroes on their last legs.  The episode makes me curious to see how it'll play out.  A cornered enemy can be an incredibly dangerous enemy.

excellent review. you captured all the important points. especially in the case of missed opportunities with the "should have been new friend to the heroes" character, Thresher.

i particularly liked the little bits of interaction between Malzor and the humans, while in his guise as a police officer. there were several times throughout the season where moments like those pleased me (like when Malzor was in a taxi in Time to Reep.. "My money's on the aliens...").

there's actually little else for me to comment on; certainly nothing for me to cover that you haven't already covered. your complaints are identical to mine. it's maybe somewhat funny that i don't have to go into crazy fan mode with this episode because it was so very well put together... that fact, when you look at how terribly inconsistent with the series that last episode is, leads me to wonder if this one had been a ramp up to a better SEASON finale, instead of a SERIES finale... i think the show could have moved into an interesting new mode if it had continued. but it seems the damage done by Paramount's change of production teams had by this point sealed the series' fate. two episodes short of a full 22 episode season... at least they tried to give it a final episode instead of just disappearing without an in-story explanation for its end.

this is, in my opinion, the series' (well, the second version's) last best example of what it did right. the last episode isn't horrible, internally, but it really comes totally out of nowhere with the introduction of a vastly different "origin" tale (even within season two it makes no sense). so this is kind of the show's last hurrah and it's a high point indeed. it shows that this creative team, and actors, DID indeed have the skills and talents to make a good series (putting aside all the political trouble caused by Mancuso/Paramount).

strange... i can't find Timothy Webber (well, at least no definite match) on IMDb. if you can identify the right guy on IMDb, here's an opportunity to add a WOTW reference... as is, i don't know enough about him to even determine which Timothy Webber is the right one (if there is one) to add the WOTW reference to. i assume he's more notable in Canadian television (then again, all the Canadian shows i watch, i shouldn't have a problem there... he seemed familiar, but i don't know from where).

Great review as always. It's sad that "The Obelisk" will be the last episode of War of the Worlds that you will be reviewing. I really enjoyed reading your thoughts and opinions on these episodes.

I really enjoyed "The True Believer". It was in my opinion, perhaps, the most solid episode of the second season. I love the direction in this episode- particularly the shots you mentioned with people walking/running in the reflective water. Very well done.

I particularly enjoyed the Malzor and Harrison interrogation scenes. The whole season had led up to this, and it is nice for the respective adversaries be face to face. And I love Mana verbally digging the knife into Malzor. He is placed his people in a dire situation and the pressure is on him. I think that was very well done.

For its minor flaws, I think this is a very strong outing. Unfortunately, "The Obelisk" is not quite a good follow-up. In many ways, it's horrid, but I look forward to your review.

I probably should have listed the Malzor/Harrison confrontation as one of the many good things about this episode. I'll agree that seeing the two adversaries finally face-to-face was a great scene and a contender for the emotional climax of the series.

I viewed the beginning scene in which Malzor finds out who "all" of the humans fighting him a bit differently then you did. He absolutely knew who Harrison was, not just because of the events of the Second Wave, but also Breeding Ground ( "I'll give you the name of the man who took her: Blackwood. Harrison Blackwood.") and Terminal Rock ( in which he sees the image from a watcher of Harrison in the club and exclaims "We have a problem"). He most likely knew who Suzanne and all of the members of the Blackwood Project were ( Hence the line in the Second Wave "We have enemy personal in the building sir: Ironhorse"). However, Kincaid was never a member of the Blackwood Project. For all the Aliens knew, there were others than just Kincaid who were part of the underground team ( Like Debbie, who they comply neglected). Since Suzanne, Harrison, and Kincaid were the only ones to show up at the beginning of the episode, Malzor just assumed that there were no others. That's the way I saw it, anyway.