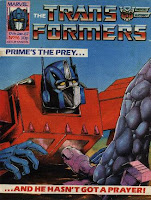 Before we get the review proper it's time for a continuity note. This issue was the 96th of the weekly Transformers comic book published in the UK. I reviewed issue #93 last week – the extremely forgettable Christmas story “The Gift”. The two issues following that one were used to print the US originated story, “Decepticon Graffiti!” which was issue #23 stateside. As you can see, we are way behind Jim's reviews of the US book, but I am going to link to all of his reviews of in between issues in my reviews so anyone keeping score can follow along with continuity.

Issue #96 begins a multi-part saga of the type beloved of Furman. The first story in this arc is called “Prey” and this is “Prey: Part 1”. Simon Furman wrote the script, Will Simpson provided the art, Steve White the colours, Annie Halfacree the letters and Ian Rimmer was the editor.

The cover, depicting a cowering Optimus Prime, was by Jeff Anderson and is a mixed effort. Optimus is portrayed rather well, blocky and dependable, as we've come to expect and, even without a mouth, the expression in his eyes and face is clearly one of concern, perhaps even terror. On the other hand it's hard to see exactly what is going on here. Having read the issue it is easy to tell that this is a representation of the moment where Prime has his gun smashed by Headstrong's foot, in rhino mode. The problem is that Prime's gun is indistinct, and miscoloured pink, as it is in the issue, and Headstrong's foot is grey and textured like rhino skin and thus looks like a rock. I always thought this was Prime going on a scouting mission and peering out from behind a rock until I investigated it more closely for the review. A much better idea would have been to have chosen a different Predacon so that we could see an orange and red robot foot, but still not know what Prime's attacker looks like.

However, a slightly wobbly cover does not necessarily effect the interior content so we move on, without further ado, to the script.

We open on a splash page with Optimus Prime reviewing the events of the past few issues. We can see screens depicting the Conehead Seekers arriving through the Space Bridge and Scourge looking particularly fierce. Prime is cowed in panic at the enormity of the threats the Autobots have faced recently. “Optimus Prime has never felt more threatened!”

The real source of Prime's concern is the fact that the Decepticons have control of a fully-operational Space Bridge which they can use to bring troops to Earth at a moment's notice. We see the effect of this in a flashback to “Decepticon Graffiti!” Prime concludes that the Space Bridge must be destroyed because capturing it would cause the Decepticons to attack all out in order to get it back. Prime is about to do vow to do this even if it costs him his life until he reviews the events of “Target: 2006!” and reveals his disappointment in how his troops handled “the Galvatron” incident. Prime does not feel confident that the Autobots could function if he were to die in battle.

I am not sure I agree with Prime here. Perhaps he would not have gone cap in hand to Megatron but he does not seem to fully grasp just how powerful Galvatron and his lieutenants really were. This cheapens “Target: 2006” a little, to think that had Optimus Prime been there everything would have been all right, and given that Prime does not seem notably more powerful than Ultra Magnus, it seems doubtful that much would have been different.

Prime's logic leaps a little further and he comes up with a new plan to test this. “What a fool I've been!” he curses himself when he finally thinks of it and any reader who guesses what this plan is ahead of time can't help but think that the foolishness isn't over yet.

Meanwhile, back at Decepticon headquarters, Megatron is going not-so-quietly insane. It appears that Motormaster has made the mistake of suggesting that the Stunticons could beat Optimus Prime in battle and this has angered the Decepticon leader enough that he almost crushes him with a giant boulder.

Soundwave watches this and broods. He has been warned of Megatron's paranoia by Shockwave, former leader, still cowed by Megatron but always plotting. Shockwave has given Soundwave some cryptic instructions which include giving Megatron a plausible plan for the assassination of Optimus Prime. He suggests recruiting a group of hunters to flush Prime into

the open where Megatron can finish him off. Megatron agrees and Soundwave suggests the very Decepticons for the task, currently waiting on Cybertron, elite trackers: The Predacons!

Meanwhile Shockwave monitors events and in a nice little bit of foreshadowing reveals that he knows about Optimus Prime from an event that occurred while they were both in limbo, during the events of “Target: 2006” The editor box-out caption informs us that we will find out what he is talking about in issue #100 which is a little disappointing. I'd rather the story evolved a little more organically, but I suppose was part of the hype surrounding the hundredth issue. The reader had probably worked out by now that Shockwave is planning to once again make himself ruler of the Decepticons but he tells us this with no ambiguity now, shouting, hands (well, hand and gun) to the sky.

A week later, we return to The Ark and Prime has shocked his troops by telling them he intends to go on a solo mission to scout the Decepticon base. He leaves Wheeljack in charge – the only Autobot who also knows what Prime is really planning to do. They load something into Prime's trailer and he starts to leave. Wheeljack is not at all happy about what is about to happen and questions it. “Save the long faces until I'm actually dead!” Prime tells him. That's right, you guessed it, Prime is going to fake his own death, using a facsimile created by Wheeljack, in order to test the reactions of his Autobots. I don't know about you but I can't see any pitfalls in this plan at all...

Back at Decepticon HQ, the Predacons have arrived and amuse themselves by taunting the hapless Motormaster. They shoot all around him without scratching his paintwork and Megatron congratulates their marksmanship. It occurs at this point that most Transformers are usually pretty good at shooting exactly everywhere but at their target, but that's just me being snarky. Shockwave calls Razorclaw aside to check that they're still in agreement and Razorclaw assures him that he has not forgotten.

Meanwhile, Prime is driving towards the Decepticons in truck mode. He decides to stop as he does not actually want any contact with the enemy. An explosion goes off in front of him and he transforms as he hits the crater it has made. He lands heavily and loses his gun. As he reaches for it we get a version of the cover as Headstrong's armoured foot comes down and crushes it to fragments. “Wh-who?” he asks shakily. Megatron is only too happy to answer: "The Predacons!" 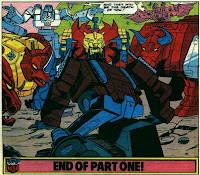 The beginning of Furman's next big epic is rather shaky. I like a lot of the elements that are being set up here, especially the continuing rivalry between Shockwave and Megatron, with Soundwave caught in the middle. The idea that the Space Bridge has become a major problem for the Autobots is a good one, although we are never really given a reason why the Decepticons do not pour through it en masse and crush Earth (Straxus has them all toiling for energon, I suppose). The Predacons are certainly intriguing and are great designs, even filtered through the lens of Will Simpson's art. It's perhaps a bit of a cliché that they prove their worth by looking better than the previous big scary combiner team, but it works well enough.

The big problem here, as I already hinted at, is that Prime just feels out of character. The “faking your own death” thing is a hoary cliché as it is, and more worthy of a sitcom than this comic. Prime is always concerned that he and his team won't be good enough, especially the way Furman writes him, so I can buy his worry about recent events, I just can't really bring myself to believe that he would go to such foolhardy lengths.

The other problem is that we have no explanation of how the Predacons find Prime. Their original plan is far too vague. We know that the Decepticons know where the Ark is, so why did they really need the Predacons? Certainly they would be useful in an all-out assault but we are told that they have been recruited for their hunting talents. If it came to a battle, it is unlikely that Optimus Prime would be anywhere other than front and centre, so hunting him out would be unnecessary. The only time the Predacons' unique talents would really be of any use would be if they happened to detect him dangerously close to the Decepticon base for no real reason, as conveniently happens here.

These grumbles aside, I like where this issue ends. The next one looks like it will be a tense, exciting, fight for Prime's life and the Predacons will make worthy opponents. I just think the set-up could have been more convincing.

Will Simpson's art is as murky as ever, the robots are still looking pretty toy-like (Megatron even has his embarrassing crotch) and there are no humans to redeem him this week. His best work is probably on Shockwave and the Predacons and his rendering of Prime's crash is pleasingly kinetic.

The colouring is mostly pretty good although Steve White does not seem to put in as much effort as Gina Hart does. There is a lot more colour blocking and simplifying than in some of the best issues of the UK book but it still beats the US issues for variety and care.
In short, not a great issue, but next week we have Prime vs the Predacons and art by Jeff Anderson, so I'm quite optimistic!
Posted by Bishbot at 12:59 PM