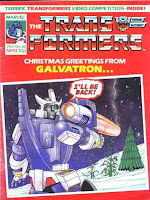 Hello, Bish here. You might remember me from about a year ago when I gave you Part 1 of a very long article about Doctor Who and promised Part 2 very soon. Sorry about that. Part 2 of that article IS coming, I just got waylaid by having a real job and other boring things. Hopefully you might also remember me from my reviews of the classic Transformers comics published by Marvel UK and it is with one of those that I’m going to kick off. I'm really hoping to get to the end without having another whole year off... Big thanks to Jim for letting me come back and for keeping his excellent blog going single-handed in the meantime.

And what a classic it is! The Gift, first published as the 93rd issue of Transformers UK on the 27th of December 1986 and reprinted twice (for some reason). Once in Collected Comics #11 (which had the excuse of being Christmas themed, at least) and Titan’s Marvel UK collection Second Generation (which had the excuse that The Gift made marginally more sense than the title story).

The Gift was written by James Hill who gave us the previous year’s Christmas effort Christmas Breaker! That story was mostly terrible but had some quite nice artwork in parts (not down to James Hill, of course). He also had a hand in Crisis Of Command, which wasn’t such a bad story. I can only conclude that Simon Furman worked so hard throughout the year that he felt compelled to take decent Christmas holidays and Hill got the call.

The pencils were by Martin Griffiths, who didn’t do much else to do with Transformers. Tim Perkins handled the inking, Steve White, who currently edits Titan’s Transformers magazine, provided the colours, Robin Riggs, the lettering and Ian Rimmer was, once again, the editor.

The cover was by Robin Smith who had a few other Transformers gigs, notably Time Wars, which I promise I’ll get to eventually. It’s a pretty bad cover, sadly. The depiction of Galvatron is quite nicely menacing, but why would he just be destroying Christmas trees? And he isn’t even in this issue. He proclaims that he’ll be back, and he will, but not for a while and not at Christmas time. The whole thing is made out to look like a picture postcard which has the unfortunate effect of shrinking the image of Galvatron and making the background too red. I can see what they were going for, but it was a swing and a miss.

The story is a slight one but it keeps the Christmas theme of not being too continuity heavy and cheering up one of the characters by having them learn a lesson. Buster is studying the American War Of Independence (or Revolution, but it’s a British comic so we’re going with the UK on this one) and is struggling to care about the Battle Of Yorktown. At first the military historian inside me bridled at this but then I figured that Buster’s kind of got a point. When you’ve spent the last few months being chased by, befriended by, nearly killed by and saving the lives of actual extra-terrestrial robots (not necessarily in that order), I can see why history doesn’t feel particularly relevant.

Luckily Jetfire arrives to break the monotony. He stands as high as Buster’s window in broad daylight and nobody in the neighbourhood notices. Presumably the jet landing would be enough to rattle a few windows, but I can’t help but feel I’m quibbling because of how stupid this story is about to become.

Jetfire is upset because he feels different from his fellow Autobots because he was created on Earth and they are from Cybertron. Because Buster played a part in his creation he feels a connection with the human, which actually makes sense. Jetfire is feeling guilty about a few errors of judgement during the Galvatron incident (Target: 2006, of course) and subsequently. These fresh battles are told in the issue and I’m afraid I’m not going to recap them in detail because they aren’t particularly entertaining and because the dilemma boils down to the fact that Jetfire hesitates when Autobots are in danger but acts swiftly to save humans, because he’s from Earth (for some reason). Buster reassures him that this isn’t a problem because he is “the first of a new generation of Terran Transformers” (Buster, the Constructicons would like a word with you...). Buster tells Jetfire that Prime will value him for his outlook on life, not his firepower.

It’s OK. You can go back and read that again. I’ll wait. That’s right, the Christmas message of this story is that it’s fine to delay helping your friends in combat because if some people you don’t know at all are in danger, you’ll leap straight to it, and your commanding officer will somehow think this makes your contribution valuable. There’s just nothing in that lesson worth salvaging. Prime would of course value humans as much, if not more, than he does his fellow Autobots, but Jetfire’s problem of hesitation actually occured when there were No. Humans. Present. I’m worried that I’ve made it sound like a dilemma where Jetfire had to choose between some humans and his friends. That scenario might actually have had some worthwhile drama (although Prime would still choose the humans every time), but in this one, we just find out that Jetfire can’t really be bothered to help out his fellow Autobots unless there are humans at stake. Jetfire is fine with Buster’s encouragement, even though it just makes him out to be a liability, and merrily transforms and flies off. Buster continues with his homework, which is very diligent of him. I wasn’t the greatest at homework while I was at school and I’m pretty sure that after I’d cheered up a talking plane in my Christmas holidays I would have considered my day complete, but then, I’m clearly no Buster Witwicky.

As you may have guessed, this was a terrible issue and this *ahem* “character development” of Jetfire is never mentioned again. 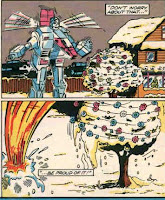 The art is passable but features no standouts really. The looming face of Jetfire through Buster’s window is faintly ridiculous (at least Michael Bay did it AT NIGHT!) and the panel of him transforming near the end looks like he is flapping his wings like a bumblebee (the insect, not the wingless yellow Autobot).

Now that’s out of the way I can continue next week with the first part of Furman’s Prey, which is a story that at least warrants revisiting.

As I said, if you can get hold of a copy of Titan's printing of Second Generation then you can read this story in it's entirity! Or you could go outside, pet your dog, or phone your mum.

Glad to have you back!

I've never liked the Christmas issues. Perhaps the best one (or the least worst one) was the one with the Powermasters... Cold Comfort? The general concept of a Christmas Transformers special seemed forced, and not very interesting.

Good to have you back, Bishbot! I’ve enjoyed the UK comic reviews (although maybe the less said about this story, the better).

Without the Christmas theme, the concept could have been an interesting one: giving a Buster a Dr Frankenstein-like responsibility for his creation. Except wasn’t it Optimus Prime who truly brought Jetfire to life? From memory, I thought all Buster did was remote-control a mindless jet, which undermines the claim Jetfire has over him.

I would say the best Christmas-themed story was the one with Starscream (which happened next Christmas), although that really isn’t saying much.

Thanks for the kind words Chuffer (nice choice of name and portrait). I'm glad to be back. I love doing these reviews but, I have to admit, I had a hard time taking that story at all seriously. I promise a more detailed analysis of the upcoming Optimus Prime on Cybertron arc.

I seem to recall that Christmas themed issues were pretty much the norm across British comics at the time - the Action Force ones are especially silly. Still it could have been worse and featured an actual appearance by Father Christmas!

I guess we should be thankful for small mercies that Transformers never did an original summer special full of the conventions of our heroes taking a traditional British summer holiday at the seaside!